The issue of whether or not the  UK has enough flights to China, and the other rapidly developing economies, is the argument most often used to call for a new runway for the south east of England, and at Heathrow in particular. Even at Heathrow, business passengers are only some 30% of the total. Willie Walsh has spoken out again against the UK visa system for Chinese visitors, which is much more costly and more onerous than obtaining a visa for the European Schengen agreement countries. A UK visa for a Chinese person for the UK costs £80 but only £56 for the Schengen area.  Willie says trade with China has been harmed by the UK visa regime that makes foreign businessmen and visitors feel unwelcome.  He was speaking on the inaugural flight of BA’s direct service to Chengdu, capital of Sichuan province, and said the UK needs to put a bit of effort into changing Chinese perceptions they are not welcome.  UK APD adds £83 to the cost of an economy flight to China, and visa fees are a real deterrent – much more than a shortage of slots at Heathrow at popular times of day.  Walsh said at other European hubs visas for transfer passengers are not required. 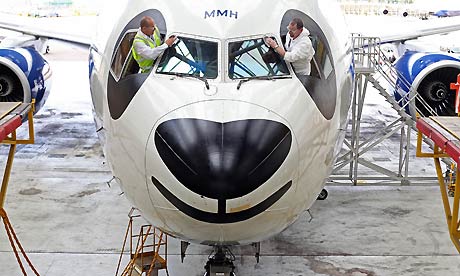 A British Airways jet gets a panda makeover to mark the airline’s inaugural flight to Chengdu. Photograph: Nick Morrish

Trade with China has been harmed by a British visa regime that makes foreign businessmen and visitors feel unwelcome, the UK’s leading airline executive has claimed.

Speaking on the inaugural flight of BA’s direct service to Chengdu, the rapidly expanding capital of Sichuan province, Walsh said: “We need a visa regime that is less bureaucratic. People need to feel that the UK is actually welcoming. There is a perception in China that the UK doesn’t want to see Chinese tourists or business. We need to put a bit of effort into changing that.

“The government talks a good talk about wanting to do business in China, but if they’re going to translate that into real opportunity they’re going to have to look more closely at the visa issue.”

He said that air passenger duty, the British aviation tax that adds £83 to the cost of an economy flight to China, and visa fees were “a real deterrent” to visitors. Walsh said limited slots at Heathrow airport had been one factor that had slowed BA’s expansion into China, but said visas were “without question a problem for us”, and claimed that they would have launched the direct Chengdu service a year ago had problems been ironed out.

While Walsh said there had been improvements in the regime, he contrasted the £56 price of a visa for the Schengen area of EU countries – where passport and immigration controls have been abolished – with the £80 it costs a Chinese visitor to enter the UK alone. The market was also more difficult for airlines at Heathrow compared with those at other European hubs where visas for transfer passengers are not required, he said.

He warned that it meant that Chinese visitors, the fastest growing sector of global travellers, were “bypassing” the UK, and said Britain would need to work harder to attract them. “We’ll need to have more people who speak Chinese and Mandarin. We’re losing out on the organised tour groups. It does embarrass me that we don’t make more effort.”

Walsh said that while China was the eighth biggest export market for the UK, “it’s still significantly behind where it could be, when you look at China in terms of its principal imports. There is an opportunity for a lot more trade.”

BA is hoping to tap into a growing business and leisure market at Chengdu, China’s fourth-largest city with a population of 14 million and a large financial, electronics and manufacturing base, whose airport has seen passenger numbers grow from 5.5 million to 32 million in the last 12 years. Advocates of Heathrow expansion have frequently cited Chengdu as an example of a destination inadequately linked to Britain due to capacity constraints.

Walsh said he did not expect politicians to act on the Airports Commission’s impending report on airport capacity, and he criticised David Cameron and George Osborne for a lack of vision. While he said that economic recovery could be seen in London, he queried if it existed beyond the capital. “If I was Osborne I certainly wouldn’t be popping the champagne corks at this stage.

“I haven’t seen much evidence of visionary leadership there. To me, they respond to whatever’s topical rather than setting out a long-term plan and a long-term vision for growth in the UK economy.”

Airport owners and retailers claim Chinese tour operators are “striking Britain from their itineraries” because of the UK’s “cumbersome” visa system, which is costing the UK economy £1.2bn in lost tourist revenue. (They are not blaming APD). The Airport Operators Association and the UK Travel Retail Forum have written to 4 cabinet ministers, including George Osborne and Theresa May, outlining the problem. Airport operators and retailers say Chinese visitors spend 9 times the amount of US visitors passing through duty free.  The airports etc want the Government to simplify the UK’s visa regime because at present, Chinese visitors view the UK’s visa system as “expensive, bureaucratic and lacking in transparency”, and it is easier to visit  Europe (which can be done on just one visa, which is cheaper than the UK visa). Currently, Chinese nationals wishing to visit Britain on holiday have to get their fingerprints taken at one of 12 authorities in China. They also have to fill out a lengthy application form and pay more than if they were to visit the Schengen area of 26 European countries.

17.8.2012
Britain wants more Chinese tourists, as they are high spenders.  However, it may be that getting a visa to the UK is more difficult and more expensive than a visa for Europe (one for the whole EU zone) and so they go there instead of getting a second visa, for the UK. Although the figures are disputed, at least 25-50% (or more) more Chinese tourists are believed to visit France than Britain.  A UK visitor visa requires lengthy forms with original supporting documents and costs £78, compared with the €60 (£47.60) that buys access to the whole European Schengen zone. The UK visa also requires biometric data, which involves applications in person, although Europe will follow suit next year. IAG has joined in the complaints about the UK visa system, saying it is bad for business and deters Chinese businessmen. Much of the power lies in the hands of Chinese travel agents and middlemen who arrange visits abroad and have considerable influence on visa applications. So the lack of Chinese tourists is nothing to do with needing more runways, or needing to cut APD. More to do with the visa process.
https://www.airportwatch.org.uk/?p=1205
.
and

Getting a visa for the UK is “torture with a system judged the worst in Europe.
September 2012

It is only in recent months the myth has been fully exposed. The myth that it is not the lack
of a third runway at Heathrow which is stopping Chinese business people from investing in
Britain and deterring Chinese tourists visiting Britain in the same numbers they flock to
France and Germany. It has slowly emerged that the difficulty of getting a visa is much
more of a deterrent.