EasyJet to fly Newquay to Southend 4 times per week in summer, after it ends Gatwick to Newquay route

EasyJet is to increase its weekly flights between Southend to Newquay from 3 to 4 over the summer period only. This comes after EasyJet recently announced it would not continue its flights from Gatwick to Newquay.  Almost 8,000 passengers flew from Southend to Newquay this summer by EasyJet.  EasyJet – which took over the Gatwick route from Flybe – said there is not enough demand to run a year-round service between Newquay and Southend, and these route from Gatwick was not financially viable for them.  A  Cornwall MP said the loss of the link to Gatwick would be a “blow to businesses across Cornwall”. EasyJet said : “Following Flybe’s decision to cease operating from London Gatwick to Newquay, Easyjet carefully and thoroughly examined the commercial viability of offering year-round services on the route. Unfortunately, after much consideration, all of the evidence clearly shows that there is insufficient demand to sustain a service using an A319 aircraft with 156 seats.”
.
Tweet

AN airline is to increase flights from Southend to Cornwall next summer after the route proved popular.

Budget airline easyJet is to lay on four flights a week instead of three after almost 8,000 passengers flew from Southend to Newquay this summer.

Southend Airport will be the only London airport flying to the surfers’ paradise as Flybe is dropping its flights from Gatwick in March.

Hugh Aitken, easyJet’s UK commercial manager, said: “Due to the success of easyJet’s new service to Newquay, we’re delighted to be increasing our flights to Newquay from Southend from three flights to four each week, for August 2014 – the most popular period of the summer.

Easy access to popular Cornish holiday highlights, including Lands End, eco-tourist attraction the Eden Project and miles of stunning beaches in Falmouth, St Ives and Penzance for £30 per person each way has proved a big draw for south Essex travellers.

Meanwhile, Southend Airport was advertised to Cornish residents as the “easy and affordable”

option for business trips and long weekends in London.

Driving from Newquay to the capital takes five hours, but the flight takes just 55 minutes – shorter than a train from Southend to London

Steve Hawkins, 60, from Falmouth, said: “I used the route a couple of times over the summer and thought it was brilliant.

“I only hope they extend it further and make it available throughout the year and not just in the summer.

“It makes it so much easier for me and my wife to come and up see our family in Essex and London.

“It’s a lot better and far more convenient than a car journey, that’s for sure.

“I also think Southend Airport is easier to use than Gatwick. It’s a smaller airport for a start, so you spend far less time walking through corridors to get your bag.

“Then all you have to do is walk across the road and you’re on the train platform.

“Now the Gatwick route has been taken away, I can see people down here really taking advantage of this route.”

EasyJet acquired 26 UK routes into Gatwick from Flybe, which operates three daily return flights on smaller planes than used by easyJet between the airport and Newquay, in a £20million deal in August.

But easyJet has said there was “insufficient demand” to fill its bigger jets to allow it to continue with the schedule when it takes over the landing slots from Exeter-based Flybe on March 30.

Derek Jarvis, Southend councillor for tourism, said: “When easyJet introduced the route, I felt it would be popular with local people in south east England because many have connections and second homes and holiday in that part of the world.

“It’s good easyJet has come to the decision to reintroduce and increase the number of flights.”

No one was available from Southend Airport for comment. 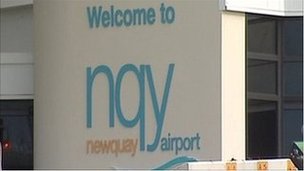 1.10.2013 (BBC)
The Newquay-Gatwick route has been regarded as a regional economic lifeline

Flights between Newquay and Gatwick are to end after Easyjet said it would not run the service next year.

The move will end the far south west’s only year-round air link to London.

Easyjet, which has blamed insufficient demand, took over the Gatwick slots from Flybe, but will now run summer-only flights to London Southend.

Newquay Liberal Democrat MP Stephen Gilberttweeted that he was “gutted” and it would be a “blow to businesses across Cornwall”.

In a statement, the firm said: “Following Flybe’s decision to cease operating from London Gatwick to Newquay, Easyjet carefully and thoroughly examined the commercial viability of offering year-round services on the route.

“Unfortunately, after much consideration, all of the evidence clearly shows that there is insufficient demand to sustain a service using an A319 aircraft with 156 seats.”

It said newly announced routes to London Southend and Liverpool will “fly thousands of people into the region providing vital support for the local economy over the summer peak”.

But one businessman, Chris Ingram from Cornwall-based Continental Underfloor Heating, said he was “pretty devastated” about Easyjet’s decision.

The Newquay-Gatwick route has been regarded as a regional economic lifeline, especially since flights to and from Plymouth Airport stopped in July 2011.

Mr Ingram said: “This is going to make it very difficult. It creates a big question for us, whether to invest money in Cornwall or do we need to seriously think about locating some core functions outside the county.”

Cornwall Council, which owns Newquay Airport, said it was “disappointed” that the Gatwick route would end.

It said in a statement: “Providing a regular air link to London is very important to the economy of Cornwall and we remain in discussions with a number of other airlines to maintain this vital link.”

The airline plans to operate four flights per week to and from London Southend from 14 July until 7 September 2014.

The airline will also fly two services per week between Newquay and Liverpool starting on 3 July until 7 September 2014.