The owners of Glasgow Prestwick, New Zealand company Infratil, have suggested they may give away the airport for nothing. The Scottish government has announced it is negotiating to buy the unprofitable airport, and hopes to conclude detailed negotiations with the company by 20 November. Scottish government said it was the “only realistic alternative to closure”.  In a statement on its website, the company said it did not expect any transaction “to give rise to material proceeds”. Prestwick was put up for sale last March after heavy annual losses. Several investors expressed interest but no offers were made. Infratil has also been trying to sell its other unprofitable UK airport, Manston. In May 2013, Infratil announced that it had written down the value of both airports to £11m. Infratil has agreed to ensure the airport is kept fully open and operational during the negotiation process. In 2012 Prestwick had around 1 million passengers, compared to 2.4 million at its peak in 2005.


Glasgow Prestwick Airport ‘may be given away for nothing’ 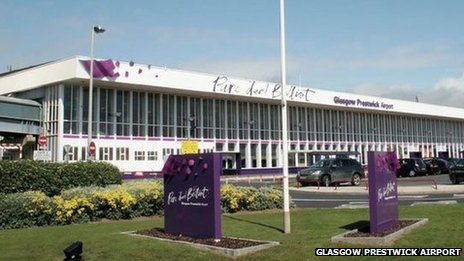 Prestwick has been making a loss of nearly £2m a year

The owners of Glasgow Prestwick have suggested they may give away the airport for nothing.

The Scottish government announced on Tuesday it was negotiating to buy the unprofitable airport from New Zealand owners Infratil.

But in a statement on its website, the company said it did not expect any transaction “to give rise to material proceeds”.

Prestwick was put up for sale last March after heavy annual losses.

Several investors expressed interest but no offers were made.

Infratil has also been trying to sell its other UK airport, Manston Kent.

“Infratil does not now expect any transaction completed for Glasgow Prestwick Airport or Manston Kent Airport to give rise to material proceeds.”

The Scottish government hopes to conclude detailed negotiations with the company by 20 November.

Infratil has agreed to ensure the airport is kept fully open and operational during the negotiation process.

On Wednesday, Deputy First Minister Nicola Sturgeon argued that Prestwick Airport could be profitable if the right approach was taken.

Ms Sturgeon said she believed that “over time” Prestwick could go “back to profit”.

She told BBC Radio Scotland’s Good Morning Scotland programme: “We are embarking on commercial negotiations with the current owners of the airport so things like purchase price for the airport will require to be resolved in terms of the negotiation.”

The minister defended the government’s decision to step in to buy the airport, saying it was the “only realistic alternative to closure”.

She explained that, once the airport was in public ownership, there would be a detailed business case made which would include levels of investment and a timescale on turning around its fortunes.

Ms Sturgeon added: “With the right financial investment, with the right commercial management, the right marketing over a period of time, Prestwick can be brought back into profit.”

The Scottish government’s bid to buy Prestwick comes just months after struggling Cardiff Airport was sold to the Welsh government for £52m.

Although publicly owned, Cardiff Airport is being managed by an “arm’s length” body rather than by the government, and “on a commercial basis”.

5.12.2012    Prestwick  – currently up for sale – has welcomed the extra Ryanair flights, which will launch next year. As Ryanair announced the services to 2 Polish airports, it said a move to Glasgow International Airport had been ruled out. The airline also unveiled six new routes from Edinburgh. Tom Wilson, chief executive of Prestwick’s owners, Infratil Airports Europe, said it would help reassure potential investors about the future of the airport.  Ryanair is planning to increase the frequency of its existing services at both Edinburgh and Prestwick and reverse two years of decline in which passenger numbers have fallen by 18%. Prestwick will see new routes to Rzeszow and Warsaw Modlin, taking the total to 27 routes and increasing the number of weekly flights from 86 to 95.  Click here to view full story …..

November 10, 2012    The value of Prestwick Airport has fallen to under a quarter of its level 2 years ago as owner Infratil struggles to find a buyer. The New Zealand-based company yesterday put the value of Prestwick and Manston Airport in Kent at £10.5 million. They had been valued at £32m earlier this year. Infratil bought it for £33.4m in 2003. A valuation carried out at the end of the financial year in March 2011 said the airports were worth £44m. Both airports were put on the market in January when Infratil said they were under-performing. It had been hoped a sale would be completed by early next year but no buyer is forthcoming. Passenger numbers at Prestwick have dropped to just under 1.1 million a year – less than half the level of 3 years ago – as Ryanair, which provides the bulk of passenger flights, has relocated many services to Edinburgh. The lack of investment has left Prestwick looking tired and off-putting to potential buyers.   Click here to view full story…

September 25, 2012  Local MP, Brian Donohue, has complained that a lack of investment in Prestwick Airport by its New Zealand-based owner Infratil is damaging prospects of a sale and jeopardising its future. Upkeep at the airport had suffered following Infratil’s decision to put it on the market in March 2012 – and there is no progress yet on selling it. Numbers of passengers and freight at Prestwick have fallen markedly in recent years. Infratil said: “The reality is that when a business is for sale, the current shareholder is unlikely to spend any more than they need to.” Passengers were down 47% in 2011 compared to the peak in 2007, and freight was 71% down in 2011 compared to its peak in 2000.    Click here to view full story…

March 8, 2012     Manston Airport has been put up for sale by its New Zealand based owners, Infratil.  At Infratil’s Investor Day it announced that it intends to sell its two UK airports Manston and Prestwick because of a refocusing of its investment profile.  Infratil will prioritise its other business interests – which include electricity generation and retailing and natural gas as well as transport provision in New Zealand. Click here to view full story…