Infratil has agreed to sell Manston Airport to Lothian Shelf (710) Limited, an entity wholly owned by Ann Gloag, a co-founder of Stagecoach with her brother Brian Souter. She is a very rich woman.  It was sold for cash consideration of £1, plus an adjustment for working capital variances and cash injected by Infratil between 14 October 2013 and transaction completion (which is expected to be around £350,000). Ann Gloag is an experienced investor who co-founded Stagecoach Group, the UK-listed public transport operator, along with her brother, Brian Souter. Infratil tried to look on the positive side, saying “Infratil Limited is very pleased to have found an acquiror with a vision for Manston Airport’s future development,” and “this sale will result in a more focused portfolio and improve our future cash flow position.” Ann Gloag said she believes “there is real potential for growth that has not been fully captured. Having worked in the transport industry for over 30 years, I believe I am very well placed to help maximise opportunities for both freight and passengers at Manston.” Sale completion will probably be on 29th November. Infratil bought Manston for £17 million in 2005.
.
Tweet 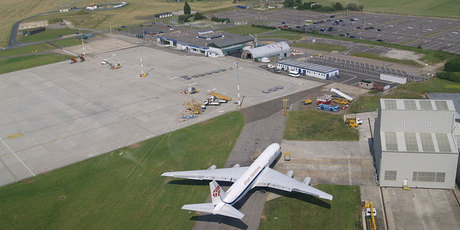 An aerial view of Manston Airport, in Kent, England.

Infratil, the Wellington-based infrastructure investor, has agreed to sell Manston Airport in the UK for 350,000 British pounds to Stagecoach Group co-founder Ann Gloag and her brother Brian Souter.

Infratil agreed to sell the airport for £1 plus adjustment for working capital variances and cash injected by Infratil, the company said in a statement.

The latest sale comes after Infratil last week said it was in talks to sell its Glasgow Prestwick Airport to the Scottish government, allowing the infrastructure investor to exit the unprofitable overseas airports it earmarked for sale in March last year. Infratil expects to write down the value of the assets in its books by about £11 million to zero in its earnings for the 6 months to September 30, the company said today.

“From Infratil’s perspective, while Manston was a very small part of the company’s overall asset base, this sale will result in a more focused portfolio and improve our future cash flow position,” Infratil chief executive Marko Bogoievski said in the statement.

The announcement comes a day after news that David Newman, a director of Infratil for almost two decades and chairman for the past nine years, had died in Wellington.

Shares in Infratil last traded at $2.535, having gained 12% this year. The stock is rated a ‘buy’ according to the consensus of analysts polled by Reuters.

Infratil bought Manston in August 2005  for £17m from the administrator of the bankrupt Planestation group.

Manston and the other UK Infratil-owned airport, Prestwick, make significant losses. In May 2011 Infratil’s annual report showed that losses from Infratil’s European airports grew from £9million to £11 million in 2010.

A strong future for Manston Airport and secure jobs are hoped for following owners Infratil Limited’s  announcement of its sale.

Infratil has described the purchaser as having “a vision” for the airport’s future development.

The buyer is Lothian Shelf (710) Limited, an entity wholly owned by Ann Gloag.

Thanet District Council leader Cllr Clive Hart said: “I am pleased that Ann Gloag is approaching the purchase of Manston with such a positive attitude and that she clearly see’s a strong future for the airport. I sincerely hope this means that jobs at the airport are secure and that the settlement can be completed as soon as possible in the interests of all concerned. I look forward to forging a good working relationship with the new owners”.

Infratil has announced the sale on its website for £1 plus an adjustment for working capital variances and cash injected by Infratil, expected to be around £350,000, between October 14 2013 and completion of the transaction completion.

Ann Gloag is an experienced investor who co-founded Stagecoach Group, the UK-listed public transport operator, along with her brother, Brian Souter.

The Infratil website includes a statement from its chief executive Marko Bogoievski: “Infratil Limited is very pleased to have found an acquiror with a vision for Manston Airport’s future development.”

“From Infratil’s perspective, while Manston was a very small part of the company’s overall asset base, this sale will result in a more focused portfolio and improve our future cash flow position.”

Ann Gloag is quoted saying: “I am delighted to have purchased Manston Airport from Infratil as I believe there is real potential for growth that has not been fully captured.

“Having worked in the transport industry for over 30 years, I believe I am very well placed to help maximise opportunities for both freight and passengers at Manston.”

The announcement, attributed to Infratil’s chief financial officer Kevin Baker, concludes that completion and settlement of the Manston Airport sale will occur on November 29 2013 or earlier, at the purchaser’s request. It is only conditional on matters within Infratil’s control.

Information about Lothian Shelf 710 at

A shelf corporation, shelf company, or aged corporation, is a company or corporation that has had no activity. It was created and left with no activity – metaphorically put on the “shelf” to “age”. The company can then be sold to a person or group of persons who wish to start a company without going through all the procedures of creating a new one.

Common reasons for buying a shelf corporation include:

More on Wikipedia at  http://en.wikipedia.org/wiki/Shelf_company

Brian Souter net worth: Sir Brian Souter is a Scottish businessman with an estimated net worth of $328 million. He is the co-founder of the Stagecoach Group, along with his sister, Ann Gloag. Using his father’s redundancy money, and working with his sister Ann Gloag and his brother-in-law Robin Gloag, Souter established the Stagecoach Group in 1980, running buses from Dundee to London. The company is now an international business operating buses, trains, ferry and coaches. In 1992, Souter and his wife set up the Souter Charitable Trust which assists humanitarian projects in the UK and overseas that adhere to the teachings of Christianity.

There is some information about Ann Gloag on Wikipedia at http://en.wikipedia.org/wiki/Ann_Gloag

Using her father’s redundancy money, and working with her brother Sir Brian Souter and her husband Robin Gloag, Gloag established the Stagecoach Group in 1980, running buses from Dundee to London.[5] Expansion continued and in the early 1990s, Stagecoach acquired National Bus Company operations in Cumberland, Hampshire, East Midlands, Ribble, Southdown and the United Counties. Stagecoach bought further bus operations in Scotland, Newcastle and London, with Manchester being added a few years later.[8] In 1993, Stagecoach was valued at £134 million and was floated on the London Stock Exchange in order to access more capital for new opportunities for buses and trains for overseas expansion. The company went on to diversify with trains and trams and expanded overseas — especially into the United States and Canada. They initially offered sandwiches (provided by her and her mother), blankets, and tea. Her involvement in Stagecoach has diminished in recent years, although she remains a non-executive director.

Gloag also has investments outside Stagecoach Group with her brother, including bus builder Alexander Dennis (through her Highland & Universal Investments company) and a chain of petrol stations and other property interests through a shareholding in Moncrieffe Holdings. She was also an investor in Cambridge-based regional airline Scot Airways but sold this shareholding on 18 September 2006.

Gloag now devotes a significant amount of her time to charity interests and has her own charitable foundations and charity projects, including Kenya Children’s Home and Freedom From Fistula Foundation, as well as supporting Mercy Ships and Opportunity International. She was appointed OBE in the 2004 New Year Honours for her services to charity. In 2009, Ann was admitted into the Order of the Star of Africa with the grade of Commander, in recognition of her support for the people and the country of Liberia. She also received the inaugural Susan B. Anthony Humanitarian Award from the National Council of Women of the United States at the United Nations in 2010 and the Eleanor Roosevelt Val-Kil Medal in 2011. She is a past winner of the Businesswoman of the Year Award, European Women in Achievement Award and has won a Great Scot Award for her work with Mercy Ships. In 2005 Edinburgh Napier University awarded her an honorary doctorate. In honour of her late son she runs a charitable school in Nairobi, Kenya, the Jonathan Gloag Academy.

Gloag has owned Beaufort Castle near Inverness since 1995, and Kinfauns Castle, near Perth since 2004. She has attempted to block off private access at Kinfauns in a high profile case.[1][2][3][4]On 12 June 2007 she was successful in gaining a court ruling that she was legally entitled to bar the public from a swath of woodland in the grounds of Kinfauns Castle.[5]

Infratil, the New Zealand-listed infrastructure fund, has agreed to take over London Manston airport for £17m from the administrator of the bankrupt Planestation group.

Infratil is seeking to expand as an operator of regional airports in Europe.

It already owns Glasgow Prestwick airport, which has been growing rapidly as the Scottish operating base of Ryanair, the leading European low cost airline, and it has also been in protracted negotiations to take over Lübeck airport in northern Germany.

Ryanair has announced that it would also like to establish a base at Lübeck, but the deal is conditional on its partner, Infratil, being successful in its plan to acquire a 90 per cent stake in the airport and to win approval to extend the runway. Planning permission for the runway extension has so far been blocked by a temporary injunction in the local courts.

The group said it believed that Manston airport, which trades as Kent International airport, had “strong prospects” as a freight airport servicing the south of England and said it had already had informal talks with a number of freight operators who were “keen” to start services to Manston.

It said the airport, which is located near Ramsgate,110kms east of London, was also well placed to provide regional passenger services to Kent and the eastern side of the London catchment area with 1.9m people within a 60 minutes drive.

The financial collapse of the Planestation group followed its foray into the airline industry and its takeover of EUjet, an Irish start-up low cost carrier which began European and domestic services at Manston in September last year.

The group including EUjet collapsed into administration last month with Grant Thornton appointed as administrator. EUjet left around 5,400 passengers stranded without return flights and a further 90,000 with advance bookings, that could not be fulfilled.

The administrator said that unlike Planestation, Infratil would not “be buying and operating an airline themselves.”

Steven Fitzgerald, Infratil Airports Europe chief executive, said it would take “some time” to make Kent International profitable, as it currently had no services. Flying operations were suspended by the administrator.

He forecast that the airport would reach an operating surplus “within three to four years”. In the first three years capital expenditure was forecast to total £9m with operating losses estimated at £8m to £10m.

He said that both Manston and Prestwick were set up to service the fastest growing air transport segments, air freight and low cost airlines. Manston had a 2,752m runway, that was capable of servicing both Boeing 747s and Airbus A380s.