BA hopes it has hit upon a dramatic new form of advertising, with massive ad billboards, near roads, which can detect the presence of a BA plane overhead. When one is detected, it plays a film of a child looking up excitedly at the plane, and then shows which flight it is, and where from. BA hope this will make viewers “.. dream of an amazing holiday or warm destination.” and “We hope it will create a real ‘wow’ and people will be reminded how amazing flying is and how accessible the world can be” (and get them to buy flights, of course). A bit of slick marketing. They have put one of the massive billboards at the Chiswick Roundabout, which is several hundred yards north of the northern runway approach path and has exceptionally heavy traffic. The local West Chiswick and Gunnersbury Society, which opposed the building of the advert towers originally, are very concerned the BA ads are a safety issue, distracting drivers. They say when the billboards were approved, the displays had to be “identical at all times and shall be static and two dimensional only with no moving or apparently moving images” etc,  Hounslow Council need to decide if the BA ads breach their planning condition.
.
Tweet

The advertising display on the A4 near Chiswick Roundabout [which is only a few hundred yards north of the Heathrow northern runway approach flightpath, an exceptionally busy road junction with very high traffic levels] which interacts with British Airways planes as they fly overhead is in breach of planning conditions according to a local residents’ group. 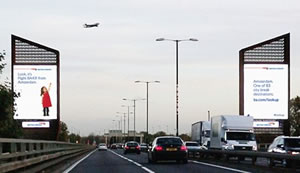 The West Chiswick and Gunnersbury Society (WCGS), which opposed the building of the towers originally, point to the following stipulation in the document approving the signs:

“The displays on all panels shall be identical at all times and shall be static and two dimensional only with no moving or apparently moving images, devices, words or emblems and shall not depict any images that resemble road signs or traffic signals.”

Marie Rabouhans, Chairman of the WCGS said, ‘I did not see the ads and I am not a planning professional but I imagine that encouraging drivers to read the “small print” and/or look up to the sky as they drive over the Chiswick Flyover or negotiate the Chiswick roundabout might raise public safety issues with respect to such ads. The “magic of flying” might turn into the “Tragic Roundabout” in more ways than one. ‘

The digital display will has tracking devices which provide onscreen updates when a British Airways flight is overhead giving details of where the plane is coming from. A child points to the sky as the plane passes to emphasise the ‘magic of flying’.

British Airways denied that the advertising was in breach of planning conditions when we asked them about the signs.

We contacted Hounslow Council to ask if any enforcement action was being planned in relation to the signs but have yet to receive a response. 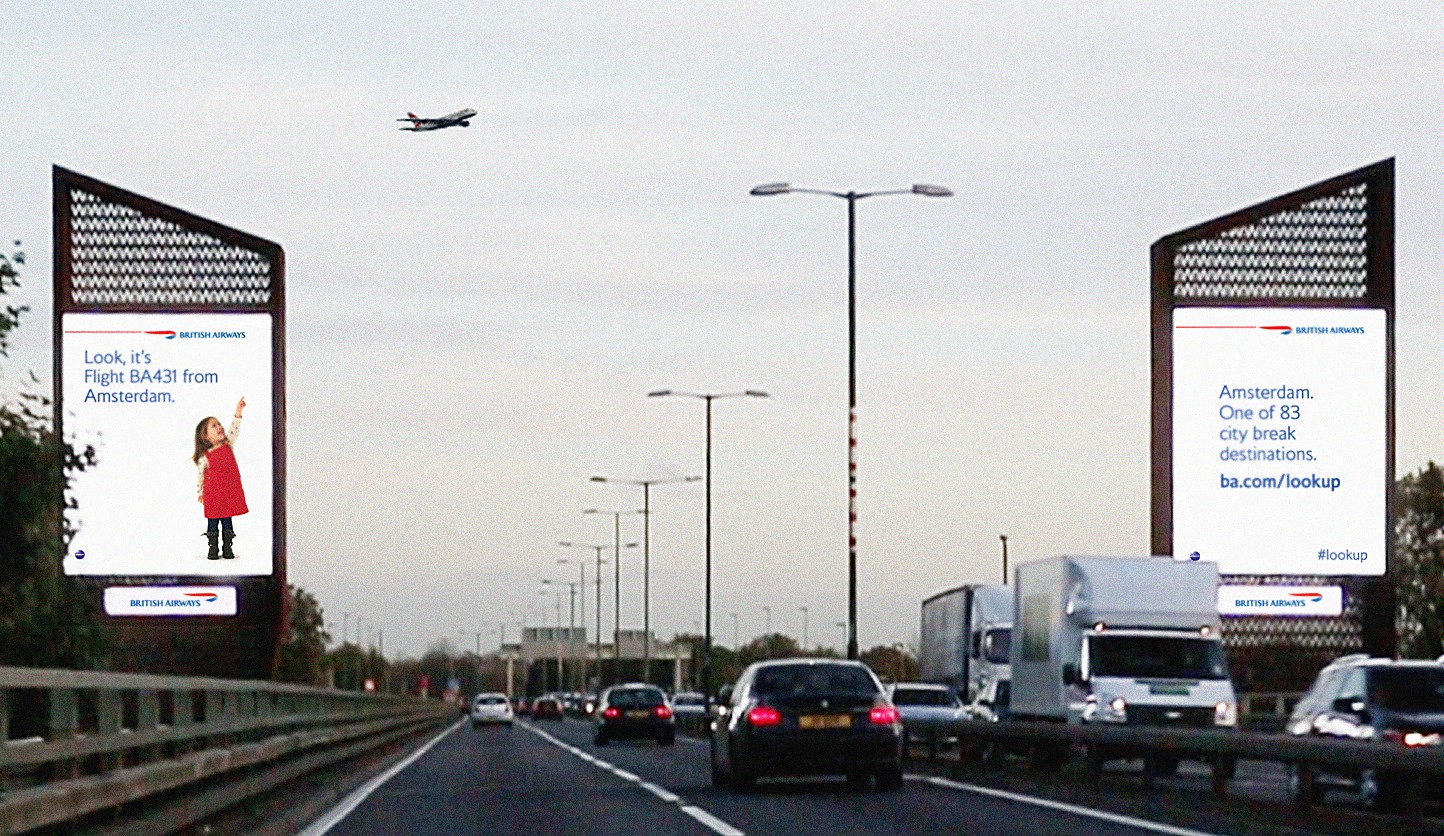 Once in a while, there comes a marketing campaign that takes your breath away. You wonder, “how did they do it?” This is one of them.

British Airways has put up a  billboards in Piccadilly Circus and Chiswick in London that respond to their planes flying overhead. When the billboard “detects” a BA flight flying below the clouds, visible to passers by, a child starts running, pointing up to the sky – chasing the airplane. The billboard then updates to reflect the flight details, like “BA flight 475 from Barcelona”, along with a URL ba.com/lookup. Onlookers can then go online and view destination details and ultimately make a booking.

British Airways has worked with the agency Ogilvy 112th Floor to custom-fit the billboards with surveillance that detects only when their flights pass overhead, and activates the billboard. Watch the billboard in action in the video (see link for the short video).

Abigail Comber, British Airways’ head of marketing, said: “This is a first, not just for British Airways but for UK advertising. We all know from conversations with friends and family that we wonder where the planes are going and dream of an amazing holiday or warm destination. The clever technology allows this advert to engage people there and then and answer that question for them.“We hope it will create a real ‘wow’ and people will be reminded how amazing flying is and how accessible the world can be.”   [Seem to have forgotten to say about the alleged vital nature of the business connections … most Heathrow flights are in fact for leisure trips. AW].

Well, it’s a great story, and it surely reminds me of my childhood, when I’d point up and run after an airplane. And brings out my inner #avgeek, when I still look up, and try to identify the airline and flight details.

While British Airways still needs to work on their social media strategy, they certainly have nailed their last few traditional marketing campaigns – first with Visit Mum, and now this #lookup campaign, to bring back the magic of flying. The latest campaign certainly seems to have caught the attention of Twittersphere.