“Heathrow Hub” proposers, claiming to be without vested interests, revealed to stand to make millions from options on land

The “Heathrow Hub” proposal for a 4 runway Heathrow got some very expensive full page ads in the  main broadsheet papers recently, probably costing a total of well over £200,000. Now the Guardian reports that the group behind the “Heathrow Hub” scheme, which said in its adverts that it was without the “lobbying of vested interests” stands to make millions from options on nearby land should its £12.5bn plan be accepted by the government. Heathrow Hub adverts aimed to persuade the public that its expansionist solution could mean “quieter Heathrow expansion” despite almost doubling the number of planes over London. Their plan includes building on a 200-acre site north of Heathrow that the group could buy for a fraction of its future value. If the government approves the Heathrow expansion scheme, the value of the land currently might rise from around £10,000 per acre to £2m or more – an increase in value from £2m to at least £400m for the site.  The 4 Heathrow Hub directors are shareholders in the land, and have a vested interest in its development.
.
Tweet

Heathrow Hub, which is promoting four-runway plan, could make millions should its £12.5bn proposal be accepted 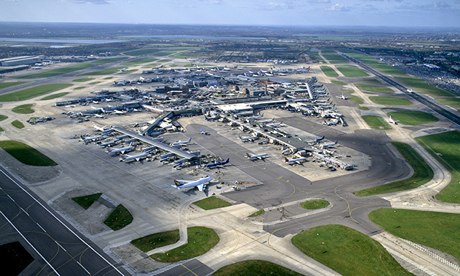 Aerial view of Heathrow airport. The Heathrow Hub proposal also includes a terminal and transport hub to be built on a 200-acre site north of Heathrow.
Photograph: Jason Hawkes/Corbis

A group that has launched a national advertising campaign for its proposal for a four-runway Heathrow without the “lobbying of vested interests” stands to make millions from options on nearby land should its £12.5bn plan be accepted by the government.

Heathrow Hub is fronted by one of Britain’s most influential civil engineers and a former Concorde pilot, and its newspaper adverts aim to persuade the public that its expansionist solution could mean “quieter Heathrow expansion” despite almost doubling the number of planes over London.

But while its commercials focus on more runways, its solution also includes a terminal and transport hub to be built on a 200-acre site north of Heathrow that the group could buy for a fraction of its future value – and where it has also been lobbying to build a new station on the HS2 line on a revised route.

Heathrow Hub’s directors include Mark Bostock, the former Arup engineer whose career history includes persuading the government to change the original route of HS1, the high-speed Channel tunnel rail link, so the line terminated at St Pancras rather than Waterloo. He also held meetings with Stop HS2 groups in the Chilterns to campaign against the current route for the new line.

Plans have been submitted to the Davies commission which is deciding on expanding airports in the south-east. If the government approves the Heathrow expansion scheme, the value for land currently under green belt restrictions would, according to estimates from property firm Savills, leap from around £10,000 per acre to £2m or more – an increase in value from £2m to at least £400m for the site. The scheme’s budget makes a proviso for £1.4bn for compulsory purchase of land.

Heathrow Hub’s full-page advert in the Sunday Times, followed by other broadsheets, invited readers to scrutinise “the plan for a quieter Heathrow expansion that isn’t being heard”. It included a visual plan of Heathrow with four runways, but not the transport hub, described in the submission to the Davies commission as a new entry point to Heathrow airport.

The terminal would straddle road and rail links, including access to the M25, the Great Western rail line, Crossrail and potentially HS2.

Posing the question, “So why haven’t you heard of Heathrow Hub?”, the advert continues: “Perhaps because it’s a logical solution devised by an aviator and an economist … rather than the pipe dream of a politician, or the lobbying of vested interests.”

Fronting the campaign alongside Bostock is Captain William “Jock” Lowe, the longest serving Concorde pilot. Bostock said they were backed by venture capitalists but declined to specify who. One backer is Ian Hannam, former chairman of global capital markets at JP Morgan, who is currently appealing against a £450,000 fine from the Financial Services Authority for passing on inside information. Hannam bought stakes in Runway Innovations Ltd, which owns the rights to the Heathrow Hub scheme and whose directors are Bostock, Lowe and two others.

Bostock confirmed that all four directors are shareholders in the firm which acquired options for the land “three or four years ago”. Asked if that meant they did have a vested interest, Bostock said: “From that point of view, yes.”

The Heathrow Hub concept was first submitted to the Department for Transport as a proposal for HS2 in 2009.

A spokesman for Heathrow airport said it did not endorse the plans, mainly as local residents would lose respite periods from noise with the new runway configuration. The airport told the Davies commission that building a transport interchange 4km north would be worse for passengers and cut public transport use.

Lowe said: “We have embarked on this advertising campaign in the hope the proposal is properly understood by all those interested in the future of Britain’s aviation capacity.”

11.3.2013A retired Concorde pilot called William “Jock” Lowe has been promoting his £7.5bn plan to extend  both Heathrow runways from 3,900 and 3,700 metres, up to 7,500 metres – approximately doubling them.  He has submitted his scheme to the Airports Commission (all expressions on intend on such projects had to be delivered to the Commission by 28th February).  In the Lowe scheme (if it was to be allowed) the number of flights could be doubled, from the current cap of 480,000 per year up to about a million. This scheme is cheaper than the Leunig scheme, proposed in October, for 4 Heathrow runways, a bit further west.  The rise in flight numbers could only be done by “mixed mode”, which means having planes both landing, and taking off, all day on both runways. So a plane would be landing on the eastern part of a runway, while another takes off on the west portion of it.  This would mean London residents over flown would get twice as many flights as they do now, and they would lose their half a day of peace, which they get from the current runway alternation. It would be deeply and passionately opposed by thousands of Londoners.

Ian Hannam, the City dealmaker who is fighting a £450,000 fine for allegedly passing on inside information, is ploughing his own money into one of the proposals to expand Heathrow.

The former chairman of global capital markets at JP Morgan is backing Heathrow Hub, a group that wants to extend the West London airport to four runways and build a new surface transport facility to connect it to Crossrail, Great Western train services and potentially HS2.

Mr Hannam has bought stakes in Runway Innovations Limited and Heathrow Hub Limited, the two companies behind the Heathrow Hub proposal, which is one of several submitted to the government-backed Airports Commission.

Mr Hannam was an engineer before moving into finance and becoming one of the City’s most high-profile bankers.

Heathrow Hub has suggested building a new transport centre on land two miles to the north of the airport’s current site, which would connect it to several major train lines, including Crossrail, the £14.8bn project that will reduce journey times between east and west London.

Heathrow Hub’s backers, who also include Mark Bostock, one of the architects of the HS1 rail scheme, have also proposed extending the airport’s two runways and splitting them into four independent ones.

They believe the project could reduce noise for local residents as the touchdown point for aircraft would be two miles further west than at present.

“In the past 30 years, London has grown into a truly global centre for finance, industry, culture and diplomacy and this has brought massive benefits to the whole country,” said Mr Hannam.

“If we are going to maintain that competitive position for the whole of Britain, there is obviously an urgent requirement to invest in aviation capacity and I am convinced that expanding Heathrow is the only realistic option on the table.

“But it needs to be done cleverly and sensitively, adopting serious noise mitigation strategies. Heathrow Hub is an absolutely brilliant solution. I believe it is also the proposal which best meets the remit of the Airports Commission and I hope that they will include it in their shortlist when it is published,” he added.

Mr Hannam is currently appealing a fine handed down in April 2012 by the Financial Services Authority (FSA) – whose duties have now been rolled into the Financial Conduct Authority – over allegations of non-deliberate market abuse, which he denies. He is now the majority owner of advisory firm Strand Partners. His other investments include Centaur, an Asian minerals business and Mansfelder Kupfer und Messing (MKM), a German copper fabricator.

The Airports Commission is drawing up a shortlist of proposals.

The northern runway option of the Heathrow hub plan: