Justine Greening: Expand Heathrow and we risk a plane crash in London

Cabinet minister Justine Greening has warned that expanding Heathrow would increase the risk of a plane crashing on London, stressing that “we cannot beat the odds forever”. She said it would be more likely that a plane would crash into a highly populated area of west London — either due to human error or a terrorist attack — if there were more flights. If that happened, there could be a lot of deaths and injuries. She was giving evidence to the Airports Commission when she said that despite Heathrow’s good safety record, human error meant that the risk of a crash could never be reduced to zero. She added: “In addition to that, aviation clearly faces other risks, not least terrorism. …The higher the absolute number of aircraft movements, the higher the danger that even an ‘extremely low probability’ event may occur.” She warned that allowing expansion at Heathrow would be “one of the biggest planning and transport strategy mistakes of this century, irreversibly blighting Londoners’ quality of life”.
.
Tweet


Justine Greening: Expand Heathrow and we risk a plane crash in London

Cabinet minister Justine Greening today warned that expanding Heathrow would increase the risk of a plane crashing on London, stressing that “we cannot beat the odds forever”.

The International Development Secretary claimed it would be more likely that a plane would plunge from the skies into a highly populated area of west London — either due to human error or a terrorist attack — if there were more flights.

Predicting Heathrow could end up with six runways if it was allowed to develop into Britain’s single aviation hub, the MP for Putney raised the nightmare scenario of hundreds of passengers, and scores of local residents on the ground, being killed.

But she was immediately accused of “scaremongering of the worst type” by pro-Heathrow expansion supporters. Giving evidence to the Airports Commission into Britain’s aviation needs, Ms Greening claimed that despite Heathrow’s good safety record, human error meant that the risk of a crash could never be reduced to zero. She added: “In addition to that, aviation clearly faces other risks, not least terrorism.

“Even one accident could be catastrophic not only on loss of life but also London infrastructure.

“The higher the absolute number of aircraft movements, the higher the danger that even an ‘extremely low probability’ event may occur. We cannot beat the odds forever.”

But Labour peer Lord Soley, a prominent campaigner for a bigger Heathrow, condemned Ms Greening’s warning as “scaremongering of the worst type”.

He argued that trains already pass through many constituencies in London at 100mph, with homes nearby.

He said: “The message to her is ‘there is not an absolutely safe form of fast transport but aviation is safer than all the others’.”

Ms Greening, who was moved from transport secretary to the international aid brief a year ago as senior Tories began to push for Heathrow expansion, also argued that a lower noise level, known as 55dB Lden, should be adopted to measure people affected by aircraft overhead rather than the current level, 57dB Leq.

This would mean more than 700,000 residents, rather than fewer than 300,000, would be deemed to suffer noise disturbance — sixty times more than around Gatwick.

She warned that allowing expansion at Heathrow would be “one of the biggest planning and transport strategy mistakes of this century, irreversibly blighting Londoners’ quality of life”.

She added: “If Heathrow continues as a future UK hub and needs significant numbers of new runways, eg six … we would potentially rapidly reach a point where the extent of London flown over becomes practically the entire population.”

She urged Airports Commission chairman Sir Howard Davies to rule out supporting a third runway at Heathrow, insisting that it would be “politically undeliverable” as it would need consensus between parties over several parliaments.

Sir John Randall, MP for Uxbridge and South Ruislip, warned lives could be endangered by taking the “unsafe gamble” of more flights at Heathrow before the “full, hidden and long-term” health effects from noise are properly known.

The former Tory deputy chief whip said a third runway risked “endangering the quality of life, and possibly the life, of affected residents”.

Recent incidents at Heathrow which raised fears about the safety of a very busy airport, which most planes approach over very crowded areas of London were:

24..5.2013A British Airways flight (BA 762) from Heathrow to Oslo was forced to turn back immediately after take off, due to what is likely to have been bird strike.  The Airbus A319 was powered by two IAE V2500 engines. The left engine appears to have hit an object at take-off, which stripped off the engine cowling. The right engine then may have hit something, and there are observer accounts of a bang. The plane did a large loop around London, in order to land again, using only the left engine. Many observers saw, and recorded, the plane – trailing smoke from the right engine, as it flew right across London. The plane made a safe landing, though passengers were evacuated down emergency chutes, and there were only 3 minor injuries. Heathrow airport was disrupted for hours due to the emergency landing. While those in favour of expanding the airport are likely to use this dangerous incident to call for more airport capacity (so Heathrow can cope with incidents without delays) it would be more relevant and more responsible to question how safe it is to have disabled planes flying miles over densely populated London. Luckily this time, there was no crash.  With Heathrow airport hoping to get another runway (or two) the safety issue of flying more and more planes over hundreds of thousands of people has to be confronted.https://www.airportwatch.org.uk/?p=3068
.
and
.

The BA flight crash-landed at Heathrow Airport. A passenger plane has crash-landed short of a runway at Heathrow Airport, ripping off part of its undercarriage. All 136 passengers and 16 crew escaped from the British Airways flight BA038 from Beijing. Eighteen people have been taken to hospital with minor injuries.  An airport worker told the BBC the Boeing 777 pilot, named later as Peter Burkill, 43, said he had lost all power and had to glide the plane in to land.   The incident happened on the south runway at 1242 GMT, as Prime Minister Gordon Brown was due to leave Heathrow for China and India. His flight was delayed because of the incident.  Witnesses described the plane coming in very low and landing short of the runway, before skidding across grass and tarmac.  Part of the undercarriage, including two wheels were torn off, and there was some damage to the wings.

Jet and passenger plane nearly collided over London in July 2009 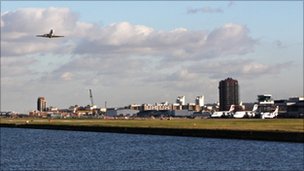 Both aircraft were at about 4,000ft when they came within half-a-mile of each other

A business jet came close to a mid-air collision with a Turkish Airlines passenger plane after taking off from London City Airport, a report has said. The Air Accidents Investigation Branch (AAIB) study described the incident over London as “serious”.   The Citation 525 jet was about 100ft to 200ft below and half-a-mile away from the Boeing 777 passenger plane, heading to Heathrow with 232 people on board.  The incident happened on 27 July 2009 at about 4,000ft.  The report said the control tower at London City Airport had cleared the German-owned business jet to climb to 3,000ft but when the flight crew acknowledged the instruction, they said they would be climbing to 4,000ft. This instruction from the plane – a “readback” mistake – was not noticed by the controller at the tower, the AAIB said.  Just how dangerous was this incident? Well, half a mile is not far in aircraft terms – if the closing speed was 300mph that distance would disappear in just six seconds.   On the other hand, a yet-to-be-published report from the UK Airprox Board, which also investigates incidents, has concluded the planes would not have collided even if no avoiding action had been taken.