In the last month before the Airports Commission reveals its interim report, there is a flurry of activity, with airport schemes vying with each other to get media attention – and the attention of Sir Howard Davies. The mega-expensive (and needing huge public funding) scheme calling itself  “London Britannia Airport” (aka Boris Island) had got itself plenty of media coverage. Its developers, Testrad, say the cost of  £47 billion to develop the airport plus rail links, infrastructure etc, “would be recouped from the real estate value and closure of Heathrow.” There is little new, other than what was reported earlier, in July. The airport claims it would bring huge economic benefits, cover most of the Thames estuary in a development area, allow the area at Heathrow (airport would have to be closed) to become a pleasant London suburb, and there are a list of other claims – including that it “avoids the problems of other land-based airport developments.”  It even makes out that it avoids bird strike problems (?). The entire area is part of the Outer Thames  Estuary Special Protection Area.
.
Tweet 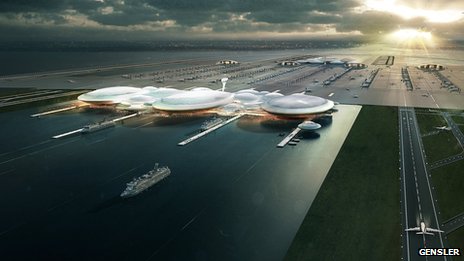 Designs and details of how a Thames estuary airport would work have been unveiled.

The consortium behind the scheme claims it could be built within seven years.

The Davies airport commission is currently reviewing potential sites for more airport capacity in the South East, including additional runways at Gatwick and Heathrow.

Testrad (Thames Estuary Research and Development) said the island scheme avoided the problems of other land-based airport developments.  [ In reality, the whole area where this  mega-airport is planned is part of the Outer Thames Special Protection area. See below and interactive map   AW.]

A spokeswoman said those included demolition of houses, removal of green field sites, bird strikes, [???]  acquisition of private land and demolition of industrial infrastructure. [Bit disingenuous, as they claim the airport will lead to massive development of areas right around the estuary, for miles. See indicative drawing below from their brochure ]

She said a key point was “separating people from planes” by giving passengers the benefit of air travel but without noise because all aircraft landing and departures would be over the estuary rather than residential areas. 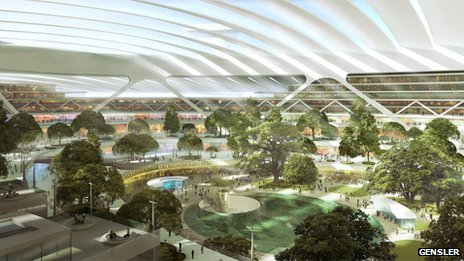 Testrad said opportunities for housing, employment and the economy were huge but Heathrow would probably have to close

“Most importantly it avoids flying over densely populated areas of London and the South East, removing completely the noise contours and impact which have bedevilled millions of people throughout and around London over the past 40 years,” she said.

The consortium has said that although Heathrow would probably have to close, the opportunities for new housing, employment and economic regeneration were huge.

It said £47bn would be recouped from the real estate value and closure of Heathrow.

Testrad said there could be a new London borough in the Heathrow area with 300,000 new houses and about 200,000 new jobs, along with economic regeneration of east London, Kent and Essex.

It said the runway configuration would allow three or four aircraft to operate at the same time, 24-hours-a-day in all weather conditions. [??]

Logistics operations would be at Sheerness and the A249 would be upgraded to provide a new M2 connection.

Passenger check-in and arrival terminals would be at Ebbsfleet, next to the high speed rail link, and at King’s Cross railway station in London.

There would be a long-term option of a check-in at the Royal Docks in east London and central London.

Testrad said check-in terminals would be linked to the airport by high speed rail tunnels and the estuary airport would be “car free with no private car access”.

The London Britannia Airport is on the same site as the former “Boris Island” plan but the project was a new “iteration” of research conducted years ago, the spokeswoman added.

Testrad is the original agency formed by London Mayor Boris Johnson to look at the estuary airport option, but it now involves more partners including architecture, marine, environment, transport and aviation experts, she said. 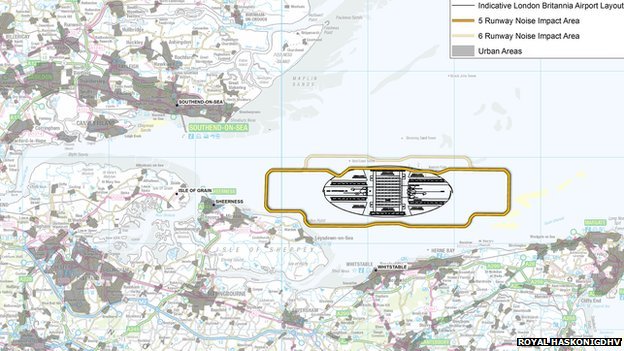 Testrad said all aircraft landing and departures would be over the estuary
.
.
.
They propose new high speed rail links from London to their airport – far out towards the east of the estuary (to be built at public expense).  It is around 40 miles, as the crow flies, from central London to the proposed airport site.  So the proposed high speed line from the airport to Waterloo would be at least 40 miles. Which is about the same distance as London to Oxford.

Area in  pink is the “Thames Gateway Area”.
..
.
Map from Page 18 of English Nature document on the Outer Thames Special Protection Area

.
and also Guardian interactive map showing conservation areas around the Thames estuary at
http://www.theguardian.com/environment/interactive/2012/jan/18/boris-island-airport-thames-wildlife-interactive
.
.
.
.
Their previous press release, from October 2012, is at http://www.gensler.com/#aboutus/news/pressreleases/124
.
.
.
.
.