Those who fought the plans for a 3rd Heathrow runway only 3 – 4 years ago have not gone away. The young environmental campaigners, who care passionately about the world’s future climate and their future, are deeply concerned about the climate implications of another runway. They know that ensuring the UK meets its target of cutting CO2 emissions by 80% by 2050 will be virtually impossible if any of the new runway options proposed by Sir Howard Davies are taken up. There really is no airport capacity crisis. An activist summed it up as: “The truth is that Heathrow has long been Europe’s biggest hub airport. Already more passengers fly in and out of London than any other city in the world, and the airport has more flights to the top business destinations than any other in Europe. A [recent] study ….showed that 9 of the 10 top destinations served by the airport are short-haul. Plenty of capacity could become available if we moved most of these journeys to alternative and less polluting methods of travel, such as rail on routes from London to Paris and Edinburgh, which are the fifth and sixth most popular Heathrow destinations.” No new runway is needed – certainly not in the short term. He adds that they are “wiping the dust off our d-Locks. Thousands of climate change protesters are on alert. Here we go again.”
.
Tweet

Corporate lobbying has hijacked the debate, convincing the public that we are facing an aviation capacity crisis 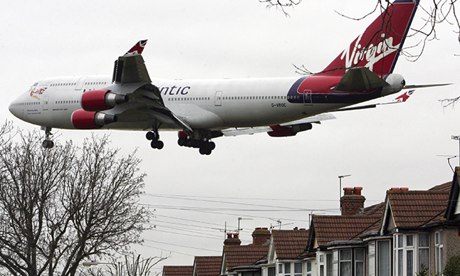 Deja vu or political incompetence? The Independent on Sunday has revealed that Tuesday’s interim report on the future of the UK’s airport expansion policy, chaired by Howard Davies, will set out three options for extra capacity in the south-east, and they all involve the expansion of Heathrow. Like it or not, we’re back where we were in 2009 when the Labour government supported Heathrow expansion. But we didn’t need it then and we don’t need it now.

How have we got here? Over the last few years, since the decision of government to rule out expansion at Heathrow and at the other major airports in the south-east, we have seen a massive corporate lobbying campaign. Heathrow has spent millions of pounds on lobbying for expansion, some of which you may have seen in advertised in newspapers and on the London tube.

All this corporate lobbying has resulted in a hijacking of the debate, convincing the public that we are facing an aviation capacity crisis. This has never been true and is something that Davies is said to be pointing out in his report.

The truth is that Heathrow has long been Europe’s biggest hub airport. Already more passengers fly in and out of London than any other city in the world, and the airport has more flights to the top business destinations than any other in Europe. A study published in April this year by Hacan, which campaigns against noise at Heathrow, showed that nine of the 10 top destinations served by the airport are shorthaul. Plenty of capacity could become available if we moved most of these journeys to alternative and less polluting methods of travel, such as rail on routes from London to Paris and Edinburgh, which are the fifth and sixth most popular destinations.

Additionally, we cannot afford to forget that a third and/or fourth runway at Heathrow would have devastating implications for climate change. There was a warning in 2009 that a third runway would result in 220,000 extra flights a year; in emission terms, this is equivalent to the entire country of Kenya’s annual output.

Ensuring that the UK meets its target of cutting carbon emissions by 80% by 2050 will be impossible if any of the options proposed by Davies are taken up. The transport secretary Patrick McLoughlin said on Sunday that the government “haven’t ruled anything out yet” but he must take into consideration that any U-turn will create a policy that is mutually incompatible with the Climate Change Act 2008.

There is so much at stake. Anyone living in west London can tell you about the noise pollution. There is also the issue of local communities that have been blighted by this political football for so long now. Zac Goldsmith MP still threatens to resign if there is a U-turn; Boris Johnson is going berserk. The locally embedded protest camp Grow Heathrow, in the village of Sipson in Middlesex which faces full demolition, now finds itself right at the heart of the resistance.

At Plane Stupid HQ, we have been spending the week reminiscing about occupying runways and the houses of parliament, while wiping the dust off our d-Locks. Thousands of climate change protesters are on alert. 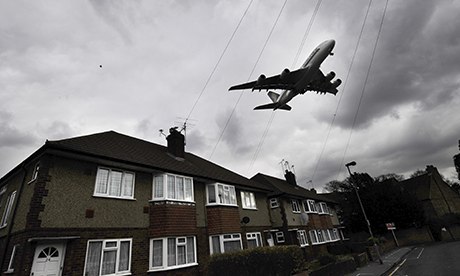 Claims that a draft shortlist pointed to Heathrow as the most likely candidate for expansion have infuriated some Tory MPs. Photograph: David Rose/REX

Veterans of the last Heathrow protests are drawing up plans for imminent action after claims that the Airports Commission will recommend additional runways at Britain’s biggest airport.

The commission is due to issue its interim report on Tuesday with a shortlist of options for runways in the south-east, in advance of its final recommendations after the general election.

But claims that a draft shortlist pointed to Heathrow as the most likely candidate for expansion have infuriated some Tory MPs and put campaigners on high alert for a new battle, even if other options should remain on the final shortlist. Campaigners warn that Sir Howard Davies , the commission’s chair, may become a protest target.

John Stewart, who chaired the coalition of opponents that succeeded in overturning Heathrow expansion at the end of the last decade, and works closely with the airport on community measures, said: “Davies has lost credibility – possibily through no fault of his own. I think Davies and the commission will now be targeted.

“He won’t be able to hide away any longer. He will be seen by many campaigners as promoting expansion at Heathrow, and as being in the pro-Heathrow camp.”

While the timetable for the commission was widely seen as kicking the question of airport expansion into the long grass, the impending publication of the interim report has unexpectedly thrust Heathrow back into the spotlight for the reluctant Conservative hierarchy and activists.

Leo Murray of Plane Stupid said: “The campaign was mothballed when the government came in, and the commission meant it wasn’t on the agenda. Now we’re dusting off the D-locks” – a reference to the bicycle locks used by protesters to stop police moving them.

Other environmental campaigners warned that the case for building new airport capacity to meet business travel demand did not stack up. WWF said that despite an improvement in the economy, business flights have not picked up from a decline lasting more than a decade.

The green group said Civil Aviation Authority figures show business air travel down 13% since 2000, and as much as 23% down at Heathrow, despite a modest recovery since the financial crisis of 2008-09.

Transport secretary Patrick McLoughlin said the Conservatives would not be betraying voters if a third runway were built. Tory MP Zac Goldsmith said on Friday that any decision from the prime minister to back Heathrow expansion would represent an “off-the-scale betrayal”.

But McLoughlin said people were obsessing over Heathrow and should “wait and see what the commission say in the longer term”, adding that David Cameron’s pledge was not to build a third runway “in this parliament” and any decision would come after 2015.