Luton Airport’s expansion bid to fly over eight million more passengers a year has  been given the green light by its owner, Luton borough council. It was agreed to by just six members of the council’s 11-strong development control committee at the rescheduled meeting, which ended after eight hours. The scheme includes nearly doubling passenger throughput to 18 million people a year,  which could mean 45,000 extra flights per year. It involves extending terminal and car park buildings, constructing a new parallel taxiway and extending aircraft parking aprons. However the approval must now be communicated to the Secretary of State for Local Government Eric Pickles. On November 18th Luton council received a direction, under the Town and Country Planning Management Order 2010 not to grant permission without specific authorisation from him. This direction was issued to enable him to consider whether he should direct that the application be referred to him, under Section 77 of the Town and Country Planning Act 1990. Councillors at the meeting heard objections from residents and councillors from St Albans, Harpenden, Stevenage, Luton, Hitchin and Flamstead. People are very concerned the expansion would bring an unacceptable increase in noise and air pollution.  The airport is proposing 60% more planes and many very late in the evening and very early in the morning.
.
Tweet 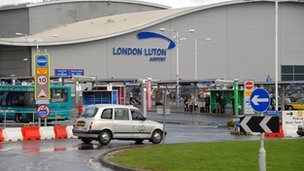 Luton boasts the fifth largest airport in the UK

Plans to expand London Luton Airport have been backed by the borough council but Communities Secretary Eric Pickles has now asked to review the decision.

London Luton Airport Operations wants to increase capacity from 12 million to 18 million passengers a year, which could mean 45,000 extra flights.

Councillors approved the planning application at a meeting on Friday.

Campaigners against the expansion said it would bring an unacceptable increase in noise and air pollution.

The Department for Communities and Local Government will consider if the application should be determined by Mr Pickles or whether the council can issue the consent.

Andrew Lambourn, from Hertfordshire Against Luton Expansion, said noise and pollution would have “a heavy impact”.

The airport is positioned in a pocket of Bedfordshire and most of the flight paths are over Hertfordshire.

“They are proposing 60% more planes and disproportionate numbers of those are going to be scheduled very late in the evening and very early in the morning.

“Let’s not carry on too far and start turning this into a blighted area.”

Plans for the airport, which is the UK’s fifth largest, also include building a new dual carriageway from the Holiday Inn roundabout to the central terminal area.

The operator plans to expand the terminal building and build a new parallel taxiway to accommodate the increase in passengers.

Luton council’s impartiality has been challenged because, while London Luton Airport Ltd (LLAL) owns the airport infrastructure, the borough owns all its shares.

It maintains its role as the local planning authority is entirely separate from its one as shareholder.

The council appointed an independent barrister, John Steel QC, to conduct a full independent review of the application.

Also from the BBC

Luton Airport expansion plan gets the go ahead

RECOMMENDATIONS to expand Luton Airport so that it can cater for up to 18 million passengers a year – an increase of 6 million – have been supported by Luton council.

Lengthy discussions will now take place between the authority and the airport to agree details of the changes, while The Department for Communities and Local Government will now consider whether the application should be ‘called in’ and determined by the Secretary of State.

Once agreed, it is expected that construction works will take place over three phases to expand, modernise and remodel the terminal building to accommodate up to 20 security passenger screening lanes, increased retail, catering and seating areas as well as a newly configured road system in front of the Central Terminal Area.

In addition a new parallel taxiway and a new multi-storey car park will be built.

The decision came after an intense 10-hour meeting, during which more than 30 individual representations against the proposals were heard.

Residents from Luton and surrounding towns and villages expressed serious fears about increased levels of noise and disturbance due to a rise in the number of night flights as a result of the changes.

However Friday’s meeting concluded with councillors on the Development Control committee supporting the recommendations for airport expansion, with many branding it ‘the most difficult decision they have had to make’.

Commenting on the announcement, Glyn Jones, Managing Director of the Airport, said: “We have committed to developing an airport which everyone in the local area will be proud of, and passengers from all over the world will enjoy visiting.

“In the year of our 75th anniversary this is an exciting milestone for all of us at the airport, the local area, and the millions of passengers who use us for business travel, to visit friends and family or to get away on holiday.”

Gavin Shuker, MP for Luton South, also welcomed the news, branding it “a great day for the town, and a much needed boost for our local economy”.

An independent barrister will oversee a planning application for an expansion of Luton Airport to ensure impartiality, the council has said.

The airport wants to increase capacity from 12m to 18m passengers a year.

Luton Borough Council backs the scheme, but recognises it faces opposition from Hertfordshire residents whose council requested the QC to ensure fairness.

The council said it had appointed aviation planning specialist John Steele QC to conduct a full independent review of the expansion application.

However, a Luton council spokesman maintained that its role as the local planning authority was entirely separate from its one as Luton Airport shareholder.

But Hitchin and Harpenden MP Peter Lilley said the planning minister should take the decision out of Luton’s hands.

The Conservative MP said: “The only way to ensure the process is, and is seen to be, independent is to hand it over to an independent body,” he said.

“I have always maintained that Luton Council should not be making this decision as the council itself is the prime beneficiary from expansion of the airport.

“I hope that the legal review will come to the same conclusion.”

The contract to run the airport was acquired by Spanish air giant AENA and investors Ardian on Wednesday after being sold by Abertis.

London Luton Airport expansion plan to be backed by council

Plans to expand London Luton Airport are set to be backed by the council.

Council officers have recommended approval of the planning application when it is considered next Thursday.

Plans for the airport, which is the UK’s fifth biggest, also include extending the current car parks and making improvements to the terminal building and aircraft parking area, with new and improved stands.

The road from the Holiday Inn roundabout to the central terminal area would be made dual carriageway.

Luton Borough Council said its approval would come with conditions and the scheme would also be referred to the Secretary of State for Communities and Local Government.

A hastily reconvened development control meeting at Luton Borough Council on 20th December decides on the planning application for doubling the capacity of Luton Airport from 9 to 18 million passengers / year. The timing of the meeting, just before Christmas, means many people who wanted to speak at the meeting are unable to attend, which is not democracy working well. An additional democratic problem is that the decision is being made by the Council which owns the airport. The local group, HALE, said “This decision should not be made by airport shareholders – it should be called in for independent scrutiny. It is a hugely unpopular plan: 88% of the respondents are opposed to further expansion, with only 9% in support.” A Hertfordshire County Councillor has succeeded in getting an article 25 planning order issued which prevents Luton Council from actually granting planning permission until the Secretary of State decides whether or not to call in the application. The scale of the proposed works are such that the application counts as a Nationally Significant Infrastructure Project, based on the extra capacity this would allow, though the airport has tried to claim otherwise. There are serious concerns locally about the noise impact, and therefore health impact, if the expansion is allowed.     Click here to view full story…

Plans to increase capacity at Luton Airport will be heard at a council meeting on 20th December. The meeting had been due for 21st November, but was postponed. The 10am meeting will be open to the public to attend. The application would effectively allow an increase in passengers of 10 million, so it should be regarded as an Nationally Significant Infrastructure Project and therefore referred to the Secretary of State, and not determined by the local council. The plans are not for any new runway capacity but road improvements, a new mult-storey car park, car park extensions, terminal improvements and extensions, and more taxi-ways and aircraft parking – enabling more planes and more passengers.Local campaign, HALE, says the reason for the hurry is that the the planning application expires on 27th December. As well as the NSIP issue, the other key area of disagreement is a lack of clarity relating to the noise levels governing the airport. Luton Borough Council has not justified the basis for its interpretation of the 1999 noise levels. This means that governance of the noise environment around Luton remains open to question and lack of clarity.     Click here to view full story…

The planning application for expansion at Luton airport remains unresolved. There was due have been a meeting of the Luton Borough Council Development Control committee to specifically debate the matter on 21st November, but this was cancelled. Two crucial issues remain unresolved. The first is whether the project counts as a Nationally Significant Infrastructure Project (in which case it must be referred to the Secretary of State); the second is an apparent ambiguity on noise levels. Legislation is clear in defining whether an airport expansion project counts as an NSIP: if the work would deliver capability to handle more than an extra 10 million passengers/ year. It appears that the plans would indeed result in the capability to deliver 10 million/year. There is current argument about which set of noise levels in 1999 should be used as the baseline level. Luton Borough Council has postponed the planning meeting and engaged a QC to review the NSIP issue. It may also be the Commissioner for Local Government might issue a holding direction preventing LBC from granting planning permission – even though the application can still go to the committee.  Click here to view full story…

Luton Borough Council’s Development Control Committee will be discussing the application for expansion at Luton airport, at a special meeting on 21st November. The officer recommendation is that they approve the application, with various conditions. One of the conditions is that: “At no time shall the passenger throughput of the airport exceed 18 million passengers per annum unless express consent is obtained from the Local Planning Authority.” It also says: “Before any part of the development hereby permitted is commenced, a day to day noise control scheme shall be submitted to the Local Planning Authority which sets out the proposals for ensuring that individual aircraft noise impact from the Airport’s operation is reduced as far as is practicable in the light of development to facilitate 18 mppa.” ie. a degree of wishful thinking on noise controls. Local campaigners are arguing that the expansion is likely to increase the annual number of passengers by over 10 million. That would mean the application should be a Nationally Significant Infrastructure Project, which the Planning Act 2008 requires to be decided by the Planning Inspectorate, not the local council. https://www.airportwatch.org.uk/?p=18375