In a blog, John Stewart says that – at long last, and not before time – the Airports Commission is now considering improving on the Leq system. In the past, aircraft noise has been measured and averaged out, to give an Leq figure. This has been convenient to the aviation industry, as it gives an unrepresentative reflection of the reality of the noise, as experienced by those living below flight paths and being disturbed. For example, by averaging noise events over a period it is possible to claim that one Concorde flying overhead is the same, in noise terms, as having a Boeing 757 flying overhead, every 2 minutes, for almost 4 hours. Clearly that is not a sensible noise metric to use, when deciding to inflict more aircraft noise on thousands of people. The 57Leq contours have always been used to produce contours, in theory indicating where the noise is “annoying”. Now the Commission will be also using other metrics – and require the promoters of the short-listed schemes to use them. One is Lden, where noise is measured over a 12 hour day; a 4 hour evening; and an 8 hour night; with 5 and 10 decibels being added to the evening and night levels respectively to reflect the lower background noise levels at these times. And a 54 db LAeq metric. And  N70 – which measures the number of aircraft above 70 decibels passing overhead.
.
Tweet

The Airports Commission could be driving a quiet revolution in the way aircraft noise is measured.

A blog about noise measurements?!

Resist the temptation to stop reading!  For this could turn out to be one of the most significant and far-reaching things to emerge from the Commission.

For decades the Department for Transport (DfT) has clung desperately to its favoured way of measuring aircraft noise in the face of overwhelming evidence that it was dreadfully out-of-date with present-day realities.  Howard Davies’s no-nonsense approach has found them out and leaves them no place to hide.

The current metric the DfT uses – and the one adopted by Heathrow Airport in making its case for a third runway – to measure noise (or noise annoyance) suggests there is no problem with aircraft noise in places like Fulham, Putney or Ealing.

This much-criticised metric, known as LAeq, averages out the noise over a 16 hour day, which is then usually averaged out over a year.  Most people accept that does not accurately reflect the way people are disturbed by the noise as it includes the quiet periods of the day and the quiet days of the year.

It also gives too much weight to the noise of each individual aircraft (which has fallen over the years) and not enough the number of planes overhead (which has increased dramatically in recent years – with a blip for the recession).  Using LAeq, four hours worth of non-stop noise from Boeing 757s at a rate of one every two minutes is said to cause the same annoyance as one extremely loud Concorde followed by 3 hours 58 minutes of relief.  That is clearly not a reflection of reality!  There has also been criticism that the level at which noise annoyance sets in – 57 db LAeq – is unrealistically high.

When the Commission’s shortlisted proposals are appraised over the coming months, the Commission will only expect the 57 db LAeq metric to be used to make historical comparisons.  It is ushering in a whole new era of noise measurement in its appraisal document https://www.gov.uk/government/consultations/airports-commission-appraisal-framework

The Airports Commission use – and require the promoters of the shortlisted schemes to use- the metric required by the European Commission – Lden – where noise is measured over a 12 hour day; a 4 hour evening; and an 8 hour night; with 5 and 10 decibels being added to the evening and night levels respectively to reflect the lower background noise levels at these times.

Many argue this gives a more accurate picture of noise annoyance.  The Commission will also use a 54 db LAeq metric.  Additionally, it will employ a complementary metric – N 70 – which measures the number of aircraft above 70 decibels passing over a property, providing the sort of understandable information local residents appreciate.

And the difference in the numbers of being impacted by the metrics the Commission will be using and that used by the DfT is startling.   Using 55 Lden, 725,000 people are impacted by noise from Heathrow; 57 db LAeq puts it at 245,000.

It will be very difficult for the Department for Transport or individual airports to revert to using only the 57 LAeq method of measuring noise annoyance post-Davies.

Whatever comes of its runway proposals, the Airports Commission will have set in train a quiet revolution in measuring aircraft noise.  Policy in future will be made on the basis of much more accurate noise measurements.

This table is on page 56 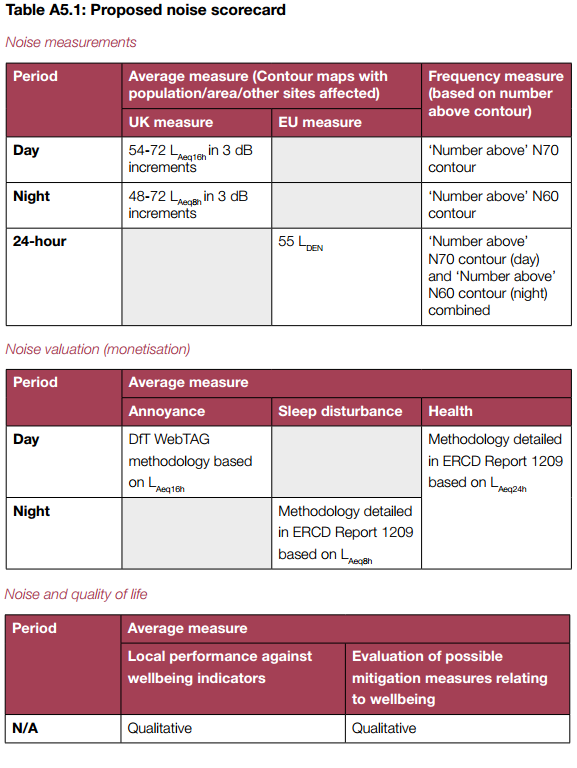