Residents in parts of west Kent are opposing proposals to change the flight paths at Gatwick Airport. NATS is consulting over changes to flight paths using Gatwick, which they say will reduce delays and improve efficiency. The proposals could mean up to 28 flights an hour over places like Hever, Chiddingstone, and Sevenoaks Weald.  NATS claims changes to flight paths are needed, and they want to create a network with planes flying on specific routes, similar to a motorway. That may mean less noise for some people, but it will mean a lot more for those who find themselves directly under one of the routes chosen for intensive use and much more air traffic. Government guidance is for aircraft noise to affect as few people as possible (there are therefore fewer complaints) but that means an unfair amount of noise for an unlucky minority, who happen to live in the wrong place.People living in Weald village, not far from Sevenoaks, fear that there could be up to 20 flights an hour going over the village, at a height of under 4,000ft (1,200m). The noise of each could be up to 70 decibels, “which is the same as being next to a vacuum cleaner.”  The changes are to allow the airport to grow.
.
Tweet 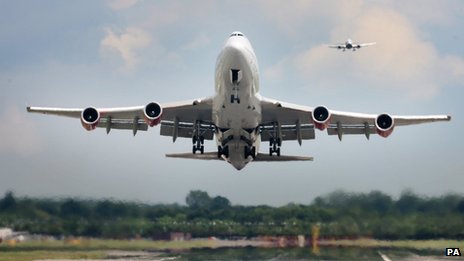 The plans could mean up to 28 flights an hour over places like Hever, Chiddingstone, and Sevenoaks Weald

Residents in parts of west Kent are opposing proposals to change the flight path at Gatwick Airport.

Airspace regulators are consulting over changes to flight paths to and from the airport, which they say will reduce delays and improve efficiency.

The proposals could mean up to 28 flights an hour over places like Hever, Chiddingstone, and Sevenoaks Weald.

NATS wants to create an airspace network with planes flying on specific routes, similar to a motorway.

It said the changes were needed to ensure safety levels and the new system would mean less noise for most people.

Brian Saunders, from the Weald, said: “There could be up to 20 flights an hour going over our village, and these would be at a height of less than 4,000ft (1,200m) which would give a noise level up to 70 decibels, which is the same as being next to a vacuum cleaner.”

Tom Denton, from Gatwick Airport, said they had tried to open up the consultation “as widely as possible”.

He added: “The areas that we’re potentially going to change are very large areas, so the area is not specifically going to direct aircraft over Chiddingstone, it’s possible, but it’s not a done deal.

“Aircraft navigation technology has developed over the years,” he said.

“We can get aircraft climbing fast to reduce the noise impact.

“And also, it will allow us to handle increased capacity over the next 15 years or so.”

There is currently a consultation, by NATS, on changes to flight paths to and from Gatwick (as well as London City, Southend, and Biggin Hill airports) that ends on 21st January. There is real concern in the Weald area, that is overflown by Gatwick flights, that planes may bring them flights overhead flying at less than 4,000 feet over them from 2015. NATS and Gatwick claim the changes will “make the airport more efficient, reduce delays and allow more departures per hour”, so making things more convenient for air travellers. Weald residents are outraged at the disturbance these changes, for passenger benefit, could cause them. They have formed a campaign – the Weald Action Group Against Noise – and have organised petitions. They will deliver the signatures to Sevenoaks MP Michael Fallon and are urging people to contact him directly via e-mail and to object through the online Gatwick Airport and National Air Traffic Services public consultation as well. The action group fears the proposals would “bring considerably more flights directly over Weald village at a height of under 4,000 feet”, creating noise up to 70 decibels, equivalent to the sound of a vacuum cleaner, with more than 20 flights an hour at peak times.” Gatwick says “overall” the changes will reduce noise for those living below – but that ignores far worse conditions created for some.

A 2nd runway at Gatwick could “spell the end” for one of the area’s top tourist attractions, Hever Castle, which was the home of Anne Boleyn. The castle’s chief executive Duncan Leslie fears the increase in planes overhead could ruin the historic castle and gardens, due to the relentless, almost non-stop noise. To make the situation still worse, planes enter the airport’s ILS landing system close to Hever, and tend to come up into it from below, with extra engine noise, especially if simultaneously making a turn. Duncan Leslie explained that when visitors come to rural attractions they are expecting a degree of peace and tranquillity. However, with the flight path for Gatwick – just some 13 miles away – over the castle and its grounds, visitors are being deterred. Already putting on outdoor theatre is almost impossible, as the plays are interrupted every couple of minutes. A group of Chinese tour operators visiting Hever had said they were astonished that the Government allowed aircraft to fly low over Hever. A high proportion of Hever’s visitors are from overseas. Mr Leslie said: “If our internationally popular tourist attractions become noise ghettoes, it does not matter how big the airports are, we will not get more tourists coming here.” Mr Leslie has asked his local council, Sevenoaks, to oppose Gatwick’s plans for a 2nd runway.    Click here to view full story…

October 20, 2013        GACC has reacted strongly to proposals to revamp many of the existing flight paths around Gatwick , which have been put forward for consultation jointly by NATS and Gatwick Airport Ltd. These plans, which are nothing to do with a 2nd runway, include new flight paths over areas which are at present peaceful – in order to increase the number of aircraft able to use the runway; more concentrated flight paths based on more accurate aircraft navigation, which will effectively make life hell for many people affected; a major reform of the pattern of aircraft queuing up to land, which will bring aircraft noise to many areas currently not affected; and the possibility of ‘respite’ by using two flight paths on alternate days. This consultation includes nothing to show where the new flight paths might be. Instead it is couched in general terms, asking people to comment on broad concepts. There are no maps, and it is apparently intended that no maps will be produced until after the end of the consultation, and NATS and Gatwick do not intend to hold a second consultation. GACC is advising its members to study the new consultation and to express their views forcefully.       Click here to view full story…

NATS, the UK’s provider of air traffic services, and Gatwick Airport have started a joint consultation today on proposed airspace changes over southern England. It is called the London Airspace Consultation (LAC) and it will run for 14 weeks, until January 21st, 2014. The public can respond. The consultation is on swathes of airspace – not exact routes – which will be determined after consideration of the consultation feedback. That makes commenting difficult. NATS says this is the first stage in a wider programme of proposed changes to deliver the UK’s Future Airspace Strategy (FAS), which is being developed by the CAA. The intention is that the FAS will help airlines make efficiencies in fuel use, and perhaps reduce noise for those over-flown. New European legislation requires all member States, including the UK, to revise airspace and maximise the use of new technologies, to get noise and CO2 benefits. The current NATS consultation involves airspace around Gatwick and also London City Airport. Later stages will deal with other areas of airspace in other parts of the London airports network, and should be completed by 2020. Local residents fear the real motive is to pack in more flights.