Local Surrey Guardian newspaper asks: “Was Leatherhead sacrificed in the floods to save Gatwick?”

After exceptionally heavy rain and wind on 23rd December, Gatwick airport had serious problems with unexpected flooding, with many flights cancelled or delayed. It is still unclear to what extent actions taken at the airport to divert water from its holding ponds and prevent the airport from flooding meant more water surged down the River Mole, making flooding worse downstream in areas such as Dorking and Cobham. It is understood that investigations are under way, and councillors for Leatherhead are seeking clarifications from the airport. The local press reported that an Environment Agency spokesman had said that Gatwick airport are constructing a further water storage reservoir directly on the Gatwick stream. The Gatwick Stream, where river levels rose rapidly, meets the River Mole south of Horley. Flooded residents feared that the contents of Gatwick airport’s balancing ponds may have been dumped into the River Mole and sluice gates further down were not opened in time.  The beautiful old Burford Bridge hotel, just north of Dorking, was damaged by deep floodwater.
.
Tweet

A firefighter from Dorking Fire Station has spoken to Get Surrey about Burford Bridge Hotel which had to be evacuated earlier today.

He said: “To my knowledge, there were 33 people evacuated, including nine members of staff.”It is under control now. The water was rising pretty quickly. Cars in the car park were completely were covered completely in water.

“There were certain complications with people with restricted mobility. Everyone got out safely.”To my knowledge no one was injured. It all went fairly smoothly.

“He said the crew had been called out to various flooding incidents throughout the night.”The most significant was there were a number of vehicles caught in the Mole at Brockham.

“There was a taxi which had two customers, I think it was a mother and a child who was 9-years-old, who were stuck on the roof of the taxi.

“It was quite an urgent matter due to the risk of hypothermia, but that was a successful rescue. “There were another two vehicles stuck there as well.

“They had tried to go over the bridge at Brockham.

“Drivers need to be very careful when approaching flood water. Do not progress otherwise you can get into trouble very quickly.”

We also have a second photo of the scene outside the flooded hotel.

By Alice Foster, (This is Local London) 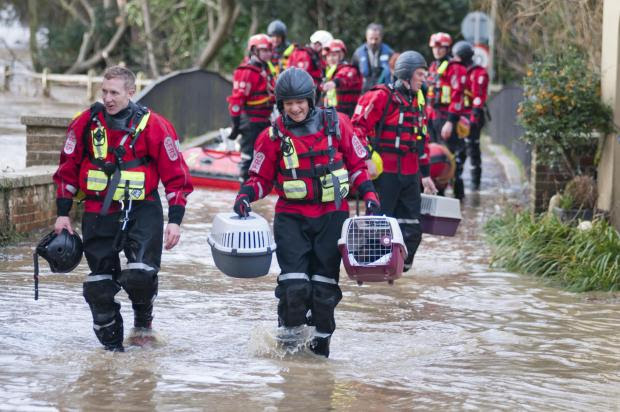 Flood warnings have been issued upstream of Leatherhead along the River Mole, prompting fears among flood victims.

After overnight rain, flood warnings are in place for Mickleham, Dorking, Gatwick, Horley and Sidlow as the level of the River Mole rises. More heavy rain is forecast tonight.

Despite no warning for Leatherhead, by 2.30pm the river level had reached 2.52 metres, above the 2.4 metre level when flooding becomes possible.

Mr Ashdown said: “We have put sandbags up. We have just got to pray that it does not come to fruition. We have got to hope there is no more damage.

Flood victim Nik Cookson, who is forming the River Mole Action Group, said: “The water is rising. I hope it doesn’t rise too much.

“I hope that nobody else gets flooded, but my situation can’t get any worse. For other poor people I hope it doesn’t get to the levels that it did before. I would be amazed if it did.”

Mr Cookson said the contents of Gatwick airport’s holding ponds must not be dumped into the Mole and sluice gates further down should be opened in a timely manner.

Mr Cookson’s home in Thorncroft Drive, Leatherhead, was among the properties flooded on Christmas Eve. Gatwick airport has come under fire for how it controlled its balancing ponds during the flooding over the festive period.

A flood alert for the River Mole said: “River levels are rising in response to overnight rainfall, in particular in the Sidlow area.

“Flooding of low lying land and roads is likely but property flooding is not currently expected. The rivers are currently very sensitive to rainfall and are responding more than usual.

“The weather forecast is for further bands of rain throughout today which may cause a further rise in river levels.”

Ministers have been forced to backtrack on claims that the flood defence spending by the Tory-led coalition was higher than under previous governments.

It has been admitted there were “some minor inconsistencies” in figures provided earlier.

An MP who has promised to conduct a review into flooding on the River Mole said he is waiting until the current flood problems subside before quizzing the Environment Agency (EA).

Earlier this month Sir Paul Beresford, Conservative MP for Mole Valley, described the flooding as a “unique disaster” and pledged to work with Surrey County Council and the EA to review why flooding happened and how to prevent it.

But after Leatherhead flooded again at the weekend Sir Paul said it was too soon to tackle the EA about the problem or to speak to Gatwick Airport about rumours it had made the problem worse.

He said: “I want to sit down with them in calmer, slightly less watery days and get to the bottom of a whole lot of things.

“I want to get everything organised and together and put these things to them. At the moment they have got their hands full with water everywhere.

Sir Paul said there are a growing number of unsubstantiated stories – including barriers being put up downstream, the use of holding ponds at Gatwick and action by BAA [BAA is no longer the owner – that is GIP] – which he wants to raise with the EA.

Sir Paul said he would speak with the EA before deciding whether he needs to approach Gatwick Airport.

He said: “If you are going to shoot from the hip, take the gun out of the holster otherwise you will get holes in your feet.”

Sir Paul said he will also visit flood victims to discuss what insurance companies are doing and offer assistance if any refuse to pay out.

He said: “I will be going round houses particularly badly damaged to talk through with people what is happening.”

He said that he would be “more than happy” to listen to and work with the Mole Valley Action Group, which is being formed by Leatherhead flood victim Nik Cookson.

Sir Paul said: “It’s deeply, deeply sad and this is why we are going to have to work towards improving the flood prevention.”