New nature reserve to be created by London Wildlife Trust under northern runway approach, at Cranford

An area of green space, called Crane Meadows in Cranford, which cannot be used for housing due to its proximity to Heathrow under the flight path, was previously owned by BAA, and Hillingdon and Hounslow councils. It passed into the hands of the London Wildlife Trust in 2010 after boundary changes.  The land has not until now been open to the public, but the London Wildlife Trust intends to make it an accessible public nature reserve and open space. It has a public consultation with local people on its plans  – ending at the end of March 2014. Though very noisy when planes are landing, the area has a mix of grasslands, woods, meadow and wetlands and a range of animals and plants. The Trust wants to know  how people want to see the space altered and where access should be provided. The Trust wants to provide  volunteering opportunities, organised activities, outdoor education sessions for children and adults  [these sessions could only be possible for the half day, with runway alternation, when planes are not thundering overhead]. The site was once market gardens and still contains old fruit trees, from the days before Heathrow was built in the 1940s.
.
Tweet


New nature reserve to be created on Heathrow’s doorstep

A wildlife oasis between the River Crane and Heathrow’s perimeter fence is set to be opened up to the public.

The mix of grasslands, woods, meadow and wetlands is already home to a diverse range of wild animals and plants.

Map showing location of the land, beside the River Crane, west of Waye avenue under the approach path of Heathrow’s northern runway   Map

The LWT intends to restore the land and open it up to the public. But before drawing up detailed plans, it has asked those living nearby how they want to see the green space transformed and where access should be provided.

“Before we make full plans for the Meadows’ future use and decide where it will be accessible from, we want local people to have their say in the future of this special green space.”

It is believed the site, to the west of Waye Avenue, was once part of the market gardens which dominated the neighbourhood before Heathrow’s arrival on the scene. Old fruit trees are still present today and can be seen among dense carpets of daffodils during spring time. Part of the land was occupied by farming family the Huckerbys, who used it to graze livestock.

The green space was previously owned by the British Airports Authority (now Heathrow Airport) and Hillingdon and Hounslow councils. It passed into the hands of LWT in 2010 after boundary changes.

Work to improve the site and encourage wildlife has already started but the charity wants people to help shape its long-term future by taking part in a public consultation, which will run until the end of March.

* For more about plans for the new nature reserve, and to have your say, visit

Heathrow has been awarded The Wildlife Trust’s Biodiversity Benchmark Award for a sixth year in a row.

The UK’s hub is the only airport to have been given this award. Heathrow actively manages around 100 hectares across 13 sites for nature conservation, including four reserve areas that are open for local people to enjoy.

The Wildlife Trust independently judges more than 40 organisations’ commitments to biodiversity, visiting each site and measuring their compliance with stringent environmental requirements. Heathrow was awarded the Biodiversity Benchmark for its continued commitment to biodiversity – keeping a close eye on a wide variety of species in the area and managing the land to support them. The Princes Lakes were also commended for their potential for improvements to wildlife and habitats.

Sustainability Director Matt Gorman said “We are delighted to have been recognised for our continued commitment to biodiversity around Heathrow and winning the award six years running is an achievement we are really proud of. We are committed to running Heathrow responsibly and continually building on our success.”

Heathrow recently won a Sustainability Leaders Award for the new Terminal 2 and was named ‘Champion of Champions’, winning four International Green Apple Awards for Environmental Best Practice and Sustainable Development. These awards reflect Heathrow’s continued commitment to enhancing the local, regional and national economic and social benefits of the airport. The UK’s hub works with more than 320 businesses to establish innovative solutions and operating procedures needed to improve environmental performance.

The Crane Valley Partnership works to support the biodiversity of the River Crane and improve access to the river corridor area for recreation purposes.

We are members of the partnership which raised around £1 million and identified another possible £1 million in funding for projects to enhance the river and its valley in 2010.

Since 2008 we have donated around £30,000 to support local charity Green Corridor to chair the partnership and to contribute funding for a River Crane Project Officer employed through theLondon Wildlife Trust.

Our collaboration with Green Corridor was also instrumental in the launch of the Heathrow Green Volunteer Team, which engages employees and local young people in biodiversity management at Heathrow and along the River Crane.

In 2010, we began work on a Crane Valley Partnership project to improve a 500 metre stretch of the river, making a decision to open it to the public for recreation purposes.

Working in partnership with the local council, the London Wildlife Trust and other local charities, a dense area of scrub land is being cleared and a surfaced pathway alongside the river is being created for people to use for walking or cycling. Clearing the area will also help more sunlight to reach the riverbank, encouraging the growth of grasses and flowering plants. We are hopeful that this will attract endangered native species, such as the water vole.

Some of the work will be done by volunteers from the airport and local communities. Around 200 person hours of labour has been donated so far helping to involve local people in the new recreation area.

When the company was forced to choose between economic infrastructure and the natural world, the ecosystem lost 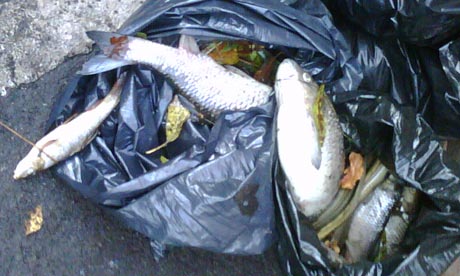 River life along a seven-mile stretch of a tributary of the River Thames has been wiped out after a major pollution incident. An estimated 3,000 fish have been killed so far. Photograph: UK Environment Agency

Imagine the scene: tens of thousands of tonnes of sewage have backed up behind a jammed gate and a decision has to be made – to flood one of the world’s busiest airports or inundate a small river very few people know exist.

It is a stark version of the choices made daily around the planet between costly economic infrastructure and the natural world: inevitably, the River Crane, and its populations of perch, eels, kingfishers and dragonfly larvae, lost.

The Environment Agency, the UK’s official enforcement body, now reports almost the entire west London river has been “killed” by the huge influx of grey sludge washed down the toilets and drains of nearby Heathrow airport, starting last Saturday night. Experts, who estimate 3,000 fish are floating dead in and along the oxygen-starved Thames tributary, say it will take “months, probably years” to recover. Anglers and other people are being warned to stay out of the water in the seven mile stretch from the A4 to the River Thames at Twickenham, though the risk to the Thames itself is thought to be low.

Thames Water issued an apology in which the company said engineers battled for hours to free the jammed sluice gate and commandeered 20 trucks to haul sewage away by road before being:

“Faced with the unpalatable choice of letting the remaining sewage back up into the airport or spill to the River Crane, we were forced to opt for the latter.”

The company also stressed that rather than wait for a prosecution, it had volunteered to work with the Environment Agency on an immediate clean-up.

There will be many who support Thames Water’s decision: the closure of such a crucial piece of infrastructure would have caused chaos, for passengers around the world, and taken days to sort out. Others will feel that the ecology of a whole river, in an already built-up area, is more important than some temporary (and smelly) inconvenience to passengers. The Crane might not have the romance of a wild salmon stream or the majesty of one of the great rivers of the world, but in a heavily urbanised and industrial area it will be, literally, a lifeline for far more than fish: for plants, insects and birds and small mamals to live in and travel through, and a valuable green space for local people.

In this case, too, the comparison of choices is also made harder by conflicting stories about the scale of likely consequences. Thames told me its modelling showed that, had it not released the sewage into the Crane, it would have washed down into the road tunnel entering Heathrow, forcing the owners, BAA, to close the airport on Sunday afternoon, as thousands of people returned from half-term holidays. It could also have affected the airport’s fire brigade, said the company.

However a spokeswoman for Heathrow told me:

“There was a possible risk to terminals one and three but there were contingency plans in place to avoid disruption to passengers.”

Those plans included trucking in temporary loo blocks and trucking out the sewage. The EA said it was told after the sewage was released into the river.

Weighing on Thames Water’s corporate mind might also have been the likelihood of enormous negative publicity and millions of pounds of possible compensation claims from BAA, airlines, hotels and other local businesses.

In the event, almost nobody but local groups noticed the Crane dying, and the cost of a clean-up is more likely to be in the tens of thousands. Fish don’t sue.

Later Richard Aylard, the company’s director of external affairs and sustainability, contacted the Guardian to explain that the original statement might have been misleading. “There wasn’t a situation where there was a man with a lever in front of him saying ‘one way: flood Heathrow; the other way: flood the river’,” said Aylard. Instead, said Aylard, engineers had to decide whether to block the built-in sewage overflow into the Crane, without knowing where the raw sewage might end up if they did. “They took what they thought was the right decision at the time, which was not to over-ride a built in safety mechanism,” he added.

There is far more awareness of the value of nature’s “ecosystem services”, especially after the publication last year of a global assessment commissioned by the UN, and this year in the UK theNational Ecosystem Assessment and the attendent Natural Environment White Paper. All have generated a lot of interest in monetising nature, and some hope that within a few years planned decisions – in this case whether to make a river teeming with wildlife the default emergency sewage drain – will take better account of those values.

Creating an environment in which more immediate decisions are made which at least give the environment a fair chance against more obvious economic interests is harder to do, though, admits Ian Bateman, professor of environmental economics at the University of East Anglia.

“The big one will be when you make it in the interest of private companies to make profits out of the environment: then they’ll have an interest in the environmental quality,” he suggests.

Allowing companies to make profits from protecting the natural world will be very controversial with many of its most vocal protectors. But it needs to be considered if we are to reach a point where a sewage company would consider flooding a road before a river.