Plans to build a hard runway in place of its 3 existing grass runways at Redhil aerodrome have been refused by a planning inspector. The owners of Redhill Aerodrome, RAV, had wanted the hard runway in order to have aircraft movements all year, even in bad weather, and to increase the number of flights from 60,000 to 85,000 a year.  Following last month’s public inquiry, the planning inspectorate ruled the development was “inappropriate” and could “harm the green belt”. Reigate and Banstead Council and Tandridge Council rejected the scheme last year, saying it was inappropriate development in Green Belt,  so RAV appealed. Local residents groups and Surrey Campaign for the Protection of Rural England (CPRE) were among objectors who gave evidence to the inquiry.  Local Conservative MPs Crispin Blunt and Sam Gyimah lodged formal objections against the development, saying the economic case was weak and it would cause major detrimental impacts on the surrounding area. The airfield flooded as a result of heavy storms last month. 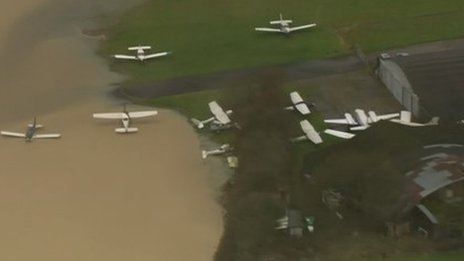 Plans to build a hard runway in place of grass at a Surrey airfield have been turned down by a planning inspector.

The owners of Redhill Aerodrome had wanted to replace its three grass strips and increase the number of flights from 60,000 to 85,000 a year.

They said the move would have protected 140 jobs and created 120 more.

The aerodrome is home to more than 20 companies and has been in operation for about 80 years.

Residents groups and Surrey Campaign for the Protection of Rural England were among objectors who gave evidence to the inquiry.

Local Conservative MPs Crispin Blunt and Sam Gyimah lodged formal objections to the development and have welcomed the inspectorate’s decision to refuse the aerodrome’s appeal.

Mr Blunt, who represents Reigate, said the aerodrome’s argument that the development would bring economic and employment benefits to the area had been “weak”.

“It was my riposte that our borough’s economy and employment situation are comparatively strong, certainly when put against the picture nationally: unemployment is at 1.7% in Reigate, whilst is it 3.8% across the UK as a whole,” he said.

Mr Gyimah, the MP for East Surrey, said the proposal represented “a completely inappropriate use of green belt land, and would have had a major detrimental impact on the surrounding area”.

Redhill Aerodrome said a hard runway would have helped prevent flooding as the current grass runways could get waterlogged very easily.

The airfield flooded as a result of heavy storms last month.

In a statement, it said it was “extremely disappointed” by the inspector’s decision.

“It is a great pity that the livelihoods of so many people and the opportunities for additional jobs, training and apprenticeships have been given so little weight,” it added.

Redhill Aerodrome’s final attempt to replace grass runways with hard surfaces has ended in failure after the Planning Inspectorate dismissed its appeal.

Aerodrome bosses wanted to replace the three grass strips with a single 1,349m-long hard runway along with 420m of approach lighting – at 60m intervals at either end of the runway, on 5m columns – drainage and a habitat management area.

These decisions sparked an appeal from the aerodrome, which was heard over five days in January, before inspector Diane Lewis dismissed the appeal on Tuesday (February 18).

She said: “The harm to the green belt by reason of the inappropriate development, the loss of openness and the encroachment into the countryside has substantial weight.

“The harm to landscape character has moderate weight and the slight adverse visual impact a small amount of weight.

“The limited harm to the quality of life and learning environment through noise disturbance and the failure to satisfactorily resolve the capacity and mode of travel issues provide additional weight against the proposal.

“The overall weight against the proposal is very strong.”

Despite turning it down, Ms Lewis said the aerodrome’s business case, which included the addition of 140 jobs and a £12.4m boost to the economy, were “realistic outcomes”, something dismissed by councillors last year.

Redhill Aerodrome bosses also applied to install a hard runway in 2011, an application which was once again thrown out by both councils.

KRAG supporters are delighted that the Planning Inspector Diane Lewis has quickly dismissed the appeal by owners RAV to develop Redhill Aerodrome.

The Inspectors full judgement is available to view or download HERE

“The appeal has been refused because the proposal was judged to have been an inappropriate development within the Green Belt. This is exactly what we have always said. The failure of RAV to prove Very Special Circumstances as a means to overcome inappropriate development appears to severely restrict their options to develop the site. It is important to remember that RAV bought this site as a rural Aerodrome that was wholly situated within the Green Belt.

RAV’s persistent attempts to develop the site have placed a long running and unreasonable pressure upon the local community to defend our Green Belt against speculative development. The expense incurred by the local community has been substantial and we hope that RAV will now take a realistic view that the site cannot be developed in the manner they appear to favour.

Should they decide to make further development proposals we believe that RAV should make a serious attempt to properly engage with the local community instead of going through the minimal process of community involvement that they are required to by current planning regulations. Such an open and reasonable approach would demonstrate a genuine commitment to community involvement.”

We are delighted to inform you that having reviewed all the written evidence and heard the oral evidence The Inspector has supported our community and dismissed RAV’s appeal regarding their proposal to build a hard runway.

The Inspector supported our view that the “very special circumstances” submitted by The Applicants did not outweigh the importance of preserving The Green Belt.

The Inspectors full judgement is available on the KRAG web site:
www.kragnet.co.uk

We are pleased to thank all the KRAG supporters and members of the local
communities who attended the hearing in support of those giving evidence.

We also thank all those who submitted their observations to The LPA’s and
The Inspector. Every piece of evidence has helped to bring about this
important decision.

KRAG will remain vigilant and monitor RAV’s response.   We also intend to seek information regarding alternative plans that the aerodrome owners may be considering  in relation to the site.

Plans to build a hard runway and associated infrastructure at Redhill Aerodrome have been under examination this week at a Public Inquiry. The inquiry will continue into next week. The aerodrome currently has two grass runways but the owners want a hard runway to allow for larger aircraft, longer flying hours and year-round flying. They have made a succession of planning applications, all of which have been refused. The airfield is wholly within the Green Belt and is reached by narrow, winding lanes. The vast majority of local residents oppose it, as do the local MPs, Parish Councils, conservation groups and Surrey Green Party. The Inquiry has been packed and lively. Officers from Reigate & Banstead and Tandridge Councils defended the decision to refuse the runway, and individuals and representatives of local groups raised a very wide range of reasons for objecting, including noise, traffic and road safety, disruption of views and flooding. Green Belt is a key issue, as is the importance of “localism” so if local people are strongly against a proposal, that should mean it is rejected. The Inspector’s decision will be made some after the end of the inquiry.     Click here to view full story…

Redhill Aerodrome has for years been trying to get a hard surfaced runway, to replace its current grass runway, so it can operate larger planes and it can also operate in wet weather. Their application has been rejected, most recently in June 2013 by both Tandridge and Reigate & Banstead councils. The public inquiry into the hard runway plans takes place on 7th January 2014, in Redhill, and will last several days. As well as the two district councils opposing the plans, they are also being fought by two parish councils and the local campaign group, KRAG. The extent of the damage to the Green Belt, and to the local community, is a key issue in the Inquiry. “One of the 5 purposes of Green Belt policy is to assist in safeguarding the countryside from encroachment. The introduction of the proposed development would not assist in safeguarding the countryside from encroachment; it would conflict with that purpose.” The jobs argument is being used by the airport’s legal team, which claims a hard runway would secure the 140 on-site jobs and create120 more jobs by 2030. The local community group, Keep Redhill Aerodrome Green branded the Aerodrome’s case as “weak” and “contains numerous assumptions, unsubstantiated statements, omissions and factors which remain unproven.”   Click here to view full story…

June 7, 2013   Councillors have thrown out plans for a hard runway at Redhill Aerodrome because it would “scar” the landscape. The aerodrome currently only has grass runways, so cannot operate in bad weather. But the aerodrome’s owners, RAV, say they will appeal to the Planning Inspectorate. Both Tandridge and Reigate & Banstead councils decisively rejected the plans to build a 1,349m-long concrete runway . A planning officer’s report had recommended councillors reject the scheme on the grounds of inappropriate development in the green belt. The new runway would have enabled the air field to increase air traffic movements by about 72% by flying in wet weather. The applicant had “dismally failed” to argue a case of special circumstances in order to gain approval to develop green belt. Opponents said 90% of households were against the hard surfaced runway, and a local councillor agreed with many residents in saying that there was “no merit” to the application which would “spoil the rural area” if given approval.    Click here to view full story…