Aviation Minister Robert Goodwill MP has launched a new airport business park, in conjunction with the airport and Newcastle City Council. The business park was outlined in the airport’s 2013 master plan.  There are suggestions that the business park could bring 7,000 jobs over 20 years (though usually many of these jobs are not additional, but move in from elsewhere).  The first phase of the plans will establish 175,000 sq ft of office accommodation across six buildings, in close proximity to the airport and within walking distance of a Metro station.  The hope is that it will attract new investors to the region and attract businesses in new international markets, such as digital and high-tech. The promoters hope the park will benefit from not only having air links but also good road and rail infrastructure nearby. The airport said other successful regional airports have been able to diversify their businesses, to not only depend on aviation. Mr Goodwill hoped Newcastle Airport succeeded in its goal to operate transatlantic flights to the US East Coast.
.
Tweet


The Airport’s planning and corporate affairs director, Graeme Mason, said there was potential for further developments if the scheme was successful.

Phase one of the park plans will establish 175,000 sq ft of office accommodation across six buildings, in close proximity to the airport and within walking distance of Callerton Parkway Metro station.

Team Valley Trading Estate owners UK Land Estates are partners in the project, which will be marketed by commercial property agents Knight Frank.

Graeme Mason said the development was well placed to take advantage of the recovering economy and hoped it would attract new investors to the region.

He told Bdaily: “This is really going to attract businesses that need quick and efficient access to new international markets, such as the offshore sector, digital and high-tech.

“Not only has it got the air links, but there’s connectivity via excellent road and rail infrastructure nearby.”

Mr Mason allayed concerns that existing commercial property did remain empty in the region – indicating that the Airport and its partners had done extensive research to establish demand and units were “pitched at the right size.” 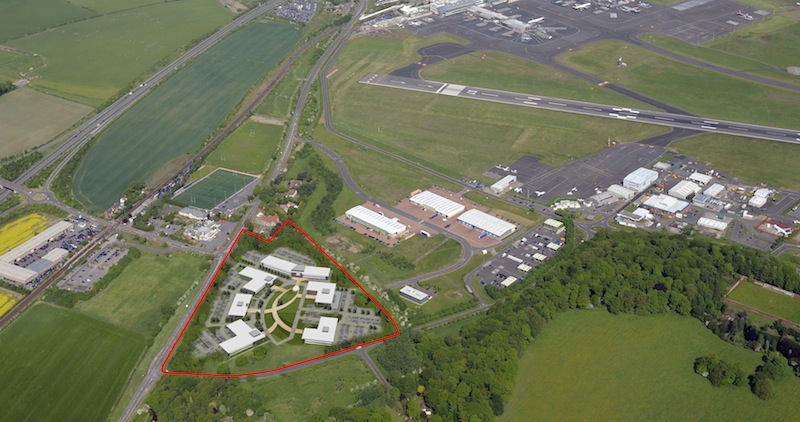 Map showing the planned area for the Business Park to the south of the Airport.

“The location is great not only for aviation related companies, but also professional services, technology and IT, telecommunications and oil and gas / offshore businesses, who can make use of the excellent connectivity on offer.

“This is a very important development for us and one which we feel will be very popular. Other successful regional airports have been able to diversify their business and we see this scheme as critical in supporting the growth of the airport.

“We are delighted to work with UK Land Estates and our shareholders on this project and the launch today is an exciting first step.”

Newcastle City Council Leader Nick Forbes cheered the plans and said they pertained to his own ambition of making Newcastle the best place to locate business in the UK.

The Aviation Minister welcomed the development and also said he hoped Newcastle Airport succeeded in its goal to operate transatlantic flights to the US East Coast.

Speaking to Bdaily on a tour of the Airport the MP for Scarborough and Whitby said the Government’s ambition for Newcastle was to grow investment, flights and jobs.

He said: “We’d like to improve surface connectivity and that means investment in the metro and the investment that’s happening on the A1.

“High Speed rail will also bring benefits to the region, as trains will not stop at Leeds, but continue at normal speeds to Newcastle.” 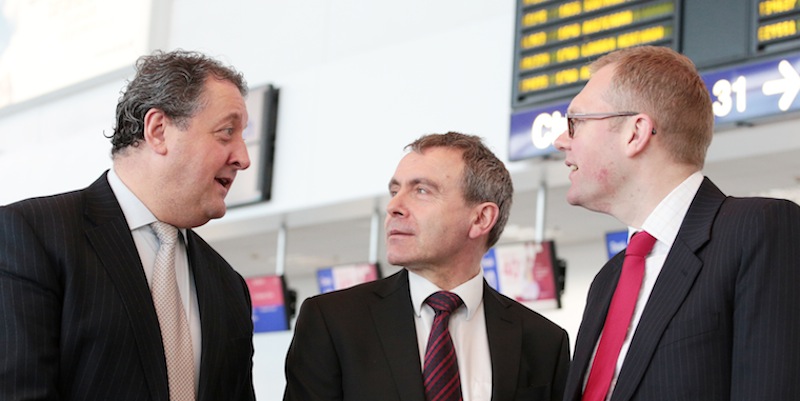 Some recent news about Newcastle airport:

July 26, 2013        Newcastle Airport published a master plan in 1994, and another in 2003. That predicted by 2030 it might have 9 million passengers. There is now another draft master plan, out for consultation until 31st October, which anticipates perhaps 8.5 million passengers by 2030 (DfT anticipates around 6.3 million). They want to grow passenger numbers from the 4.4 million by 2030 and increase aircraft movements from 62,200 to up to 87,500 – making it one of the top 10 biggest airports in the UK. There are the usual predictions of more jobs (they say the airport now “supports” (vague term) 7,800 jobs across the region and by 2030 this will rise to 10,000. The airport hopes to develop 2 business parks on land south of the runway – one to extend existing aviation-related activities such as freight, and a new site for offices. They say these have the potential to deliver “thousands more” jobs. The airport says it contributed £646m to the regional economy in 2012, and by 2030 it is estimated that this figure will “more than double.” In 2005 some 22% of passengers were on business; by the 2009 CAA air passenger survey, it was only 20% on business. ie. 80% of passengers are leisure, contributing to taking their holiday money out of the UK.      Click here to view full story…

Emirates considers direct flights to the USA from UK northern airports, not Heathrow

July 26, 2013     Dubai’s Emirates Airline is interested in getting into the competitive transatlantic market, and offer flights from Dubai to the US via the UK. This market is currently dominated by BA, Virgin Atlantic, Delta Air Lines and American Airlines. Emirates will need to get regulatory approval first. Emirates believes there is strong unmet demand for flights from the north of England to the USA and last year carried 800,000 passengers on its routes in and out of its hubs in the north of England: Glasgow, Newcastle, Manchester and Birmingham. There are growing numbers of Emirates passengers and services from these northern UK airports. In October, Emirates will launch flights from Dubai to New York via Milan. Their UK vice president said they are asking the Airports Commission to look at making all the regional airports completely open skies, so anyone can fly anywhere. If they use the northern airports, there is less pressure on the south east airports, and less rationale for building another runway. “Heathrow sits in the south of England, but Manchester has a bigger catchment area in terms of a two-hour drive.” If Emirates goes through with the plan BA and Virgin will be the big losers.    Click here to view full story..

June 21, 2013     Newcastle Airport has been at the Court of Appeal battling to convince top judges to overrule a previous decision not to punish a law firm (Eversheds) which the airport said was to blame for under-the-radar awards to its former chief executive and finance director. The airport says contracts which handed airport bosses a controversial multi-million pound pay package were “dramatically inconsistent with the principle of fair and responsible remuneration”, a judge has heard. The airport’s leadership group NIAL suffered a stinging defeat last year when a High Court judge ruled that responsibility for the debacle lay not with Eversheds LLP but with non-executive directors sitting on the company’s remuneration committee. They had inadvertently permitted the executives to “dictate” the terms of their contracts and had not read them properly before signing them.” Newcastle airport is majority-owned by 7 North East councils, who did not know about contract negotiations & bonus deals in 2005 & 2006.    Click here to view full story…

March 25, 2013     Heathrow Airport has been saying recently that, though it is desperate to get a third runway, even they realise that there is not the demand for a 4th runway. The DfT has consistently over-estimated the amount of passenger demand over the last decade. In reality, passengers from parts of the UK other than the south east can get long haul flights from regional airports. The UK Vice President of Emirates says he wants to expand flights from UK’s regional airports, rather than Heathrow or Gatwick, and has a direct flight from Newcastle to Dubai, for transfers on from there. With that happening more and more in future, the south east airports’ dreams for expansion in the south east, requiring a massive hub airport, look less and less probable. Forecasts more than a few years ahead are based on so many uncertainties and unknowns as to be almost without value. Making best use of existing airports is more efficient than grandiose new infrastructure projects which run the risk of being white elephants. Had a second Stansted runway been built by 2012, it would now be standing idle.    Click here to view full story…