easyJet has announced the signing of a new 10-year price deal with Luton which could lead to easyJet expanding from 4 million to 9 million passengers per year.  EasyJet started off its life at Lution, in 1995. There are, of course, the usual claims about the large number of jobs that would be created – some 2,500 job, they suggest. Luton has a small proportion of business passengers (around 19% in 2010) and 80% of its customers are charter airlines for cheap beach etc “bucket and spade” holidays abroad.  The airport also boasts that it is “the biggest airport in the UK for private jets.” Commenting on the easyJet deal, the local opposition group, HALE said they were very concerned about the extra noise that would be caused by this huge rise in number of flights, and they want a commitment from easyJet to a clear timetable for introduction of quieter airframes and engines.   EasyJet are currently switching from A319s to the larger, heavier and currently noisier A320, which won’t help. HALE are also worried that the expansion of easyJet will mean even earlier departure slots and even later arrivals slots.  At present Luton’s expansion plans at Luton, which involve extending the airport’s terminal and improving road access, are currently on hold pending a decision by the Secretary of State whether to “call in” the application or not.
.
Tweet


EasyJet to help put Luton airport back on the map

The low cost carrier has entered into a 10-year deal with Luton, the airport where easyJet was founded.

Luton airport wants to grow from 10m to 18m passengers a year and is awaiting planning approval for its expansion proposals. Photo: Alamy
By Nathalie Thomas, Leisure & Transport Correspondent (Telegraph)

Low-cost giant easyJet has struck a 10-year price deal with Luton Airport to help put the base, where it started life in 1995, back on the map.

The airline, which was founded in a small office at Luton by Sir Stelios Haji-Ioannou and is now the UK’s biggest carrier by passenger numbers, said the deal could see it more than double its traffic at its “home” airport from four to nine million passengers a year. The expansion could also see as many as 2,500 jobs created at the airport and in the local area, easyJet said.

The agreement will come as a significant boost for Luton as the airport’s operator awaits approval for £100m investment plans to expand its capacity to 18m passengers a year and shake off its dowdy image.

The plans, which involve extending the airport’s terminal and improving road access, are currently being assessed by Eric Pickles’ Department for Communities and Local Government.

Glyn Jones, managing director of the airport, said 19pc of Luton’s passenger traffic comes from business travellers yet it is still associated in many people’s minds with charter airlines and as the starting point for cheap beach holidays abroad.

The airport, which expects to see around 10m passengers pass through its doors this year, is planning a major re-brand to encourage further business passengers and to overhaul the airport’s image. Mr Jones pointed out that Luton is already the biggest airport in the UK for private jets.

The deal with Luton is the second in less than a week for easyJet, which last week announced a seven-year agreement with Gatwick.

Progress at Luton has been delayed by the sale last year of the rights to operate the airport, which were acquired by Spanish infrastructure group Aena and Axa’s private equity arm in a deal valued at £433m.

Carolyn McCall, chief executive of easyJet, said the rate of expansion at Luton, which is on the doorstep of the airline’s headquarters, would be “in part reliant” on planning approval for “much-needed improvements” at the airport.

“People living close to airports are affected by increased noise if expansion plans such as this go ahead, and airlines must factor them into their thinking. Before adding yet more flights, we’d like to hear easyJet commit to a clear timetable for introduction of quieter airframes and engines at Luton Airport – particularly since we already know they plan to switch from Airbus A319s to the larger, heavier and currently noisier A320s in any case.
Will easyJet also commit to avoiding even earlier departure slots and even later arrivals slots? The night-time has already been eroded to just 6 hours by aircraft noise, and people have to sleep.
Extra jobs, and benefits to passengers, have to be balanced by effective actions to reverse the increasing noise trend at Luton Airport. Noise is a form of pollution, and businesses which create noise need to invest in mitigation for its effects, as well as being prepared to constrain the hours during which noise is made. These are not unreasonable demands, and we look forward to some specific proposals from easyJet to balance its announcement today.”
http://www.hale.uk.net/ 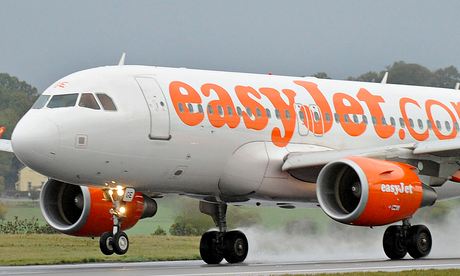 An easyJet plane landing at Luton airport. Easyjet has 15 aircraft based at the site, its second largest base in the London area, and employs 1,600 staff locally. Photograph: ATM / Barcroft Media

Low-cost airline easyJet has secured a 10-year deal with Luton airport which could see it more than double passenger numbers at the site from 4 million to 9 million a year.

It said the expansion would also lead to the creation of 2,500 jobs at the airport and in the surrounding region.

But the chief executive, Carolyn McCall, said the pace of the growth depended on site improvements being approved, adding that Luton could make a “real and immediate” contribution to the need for more airport capacity.

EasyJet has 15 aircraft based at Luton, its second largest base in the London area, and employs 1,600 staff locally.

It said it planned to increase capacity by 20% over the next year by adding new business and leisure routes and increasing the frequency of flights on some of its 39 routes.

McCall said: “This is a substantial, long-term deal with London Luton airport – our first base and the airline’s home – which will enable us to double our size at London Luton in the next decade and add an even greater range of business and leisure destinations.”

Last week the airline signed a deal with Gatwick airport, which will give it certainty over user charges for the next seven years. The plan is for easyJet, which already flies 45% of the passengers from Gatwick, to be housed entirely in the larger north terminal, where it will become the dominant operator.

EasyJet revealed last week that it was set for a smaller-than-expected loss over winter, after it benefited from improved revenue trends and benign weather.

EasyJet has also done a deal with Gatwick:

easyJet today announced that it has agreed a new seven year deal with Gatwick Airport(GAL) from April 2014 which will incentivise the airline to grow at the airport and provide the framework for easyJet and GAL to further improve customer experience for easyJet’s passengers.

“Gatwick is our largest base so it is of strategic importance to secure this new agreement with Gatwick Airport.  easyJet shares the CAA’s view that Gatwick has market power but also supports the move towards a more commercial arrangement with the airport within a regulatory framework.

“This agreement gives easyJet certainty on passenger charges over the next seven years and a clear incentive to continue to grow. More importantly, it will create a framework for easyJet and Gatwick to plan and deliver an improved experience for our passengers.

“Our shared ambition is for Gatwick to be both our biggest and best airport.”

“This partnership with easyJet is a landmark deal in London Gatwick’s history. Four years after the end of the BAA monopoly at the airport, this partnership highlights how far we have come to be able to operate within a new framework of commitments and contracts. Forpassengers travelling with easyJet, they will have more choice, competitive fares and an even better experience. It is positive news for both business and leisure passengers travelling with easyJet from Gatwick.”

easyJet plans to continue to grow at Gatwick through increasing our slots and by deploying larger aircraft as easyJet replaces 156 seat A319s with 180 seat A320s and, from 2017, A320Neos. In the next year (end March 2015) alone the airline will increase capacity and passenger numbers by around 10% compared to the previous year.

The agreement has been reached within the new ‘commitments’ framework which will replace the current regulatory regime as confirmed by the CAA last year‎.

easyJet started flying from London Gatwick Airport in 1999 and now has 57 aircraft based there, operating on 108 routes. The airline has around 1400 cabin crew and 700 pilots operating from the airport.