The noise from planes using Heathrow airport is a huge issue, affecting hundreds of thousands of people. Noise at other airports is equally a serious problem for those affected. Over decades, local communities have had little reason to trust the airports and the authorities (a recent example being the  unannounced flight path trial over Warnham, from Gatwick).  Aircraft noise is considered to be an unfortunate side effect of the alleged benefits of a growing aviation sector, with those affected being necessary “collateral damage” of this industry. The Airports Commission, in its interim report in December, recommended the setting up of an independent noise authority which would be able to deal with noise issues. Now a letter, supporting the establishment of an Ombudsman, has been sent to the Guardian, signed by a long list of notable people, including many opponents of a 3rd Heathrow runway. The letter hopes the Ombudsman may establish more “trust and confidence.” However, no amount of liaison, consultation etc will actually make the amount of noise diminish, which is what most people who suffer from aircraft noise actually want.  There are fears that the new body will be “long grass into which difficult issues could be consigned.”

Letter to Guardian calling for regulator is signed by opponents of expansion as well as advocates of growth at London airpor
By Patrick Wintour, political editor 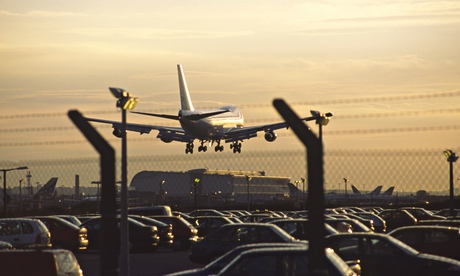 An ombudsman could be responsible for advising on how best to compensate those experiencing noise, the best means of monitoring noise, and where possible to reduce or mitigate it. Photograph: Alamy

Noise levels at Heathrow and other airports should be regulated by an independent ombudsman, according to an unlikely alliance of critics and supporters of the airport’s expansion.

The coming together of the two sides over the most contentious issue facing the west London airport in particular is also seen as a breakthrough in the political row over its future. The fresh initiative is spelt out in a letter to the Guardian, whose signatories include Zac Goldsmith, the Conservative MP for Richmond Park and a fervent opponent of expansion. Other signatories include Tim Yeo, the chairman of the energy and climate change select committee, the Green MP Caroline Lucas, and the directors of the Back Heathrow and Let Britain Fly campaigns, which support expansion.

Advocates of the initiative believe it could break the logjam of mistrust between residents and the airline industry. The business group London First advocated the appointment of an aircraft noise ombudsman in the autumn, and has been slowly building support from interested parties including the London assembly, Virgin Atlantic and the Stop Stansted Expansion campaign.

The letter to Guardian argues an independent ombudsman could have “a fundamental role in further establishing trust and confidence, thus bringing about a fair and reasonable balance between increasing demand for flights and noise control”.

The idea, requiring primary legislation, was strongly supported in principle by the interim report of the Davies commission into airport expansion, to which the government is due to respond in the next few weeks. The purpose of the ombudsman would be to work collaboratively with all interested parties to report on noise in an open, transparent and intelligible manner, and “to deal with noise limitation problems fairly and sustainably”.

The body would have to report to parliament, and its precise terms of reference and enforcement powers would be critical to the body being useful and generally supported. Some argue that its powers should be limited to naming and shaming airlines that fail to follow its advice. Currently the only legislation affecting aircraft noise covers night flights, while the Civil Aviation Authority, funded by airlines and airports, monitors aircraft noise at Gatwick, Heathrow and Stansted. Heathrow has a noise team to handle complaints but the reasons for its decisions are largely opaque.

In a joint statement given to the Guardian, the airline industry and environmental campaigners said: “For most, who do not live near to a major airport, air travel is exclusively defined in terms of the considerable economic or social benefits which it brings; their experience of aircraft noise is an ambient sound somewhere up in the sky. On the other hand, for those who live near major airports, aircraft noise can be an imposition. The time has come to adopt a fresh approach, to restore trust and give them the confidence that their legitimate grievances are being addressed.

The initiative comes as London First, Let Britain Fly and Heathrow Association for the Control of Aircraft Noise (Hacan) come together on Tuesday to hold their joint conference on aircraft noise. Gavin Hayes, the director of Let Britain Fly, a campaign group funded by the airline industry, said: “It’s vitally important to do everything possible to enhance the quality of life of all of those who live around Britain’s airports. There is a golden opportunity to ensure that aircraft noise is managed more effectively, progressively reducing it and the number of people it affects.”

John Stewart, chair of Hacan, welcomed the initiative as “the first time that organisations from all points of the spectrum in the debate on aircraft noise have co-operated in this way to find solutions. That debate has for many years been challenging, complex and, regrettably, fraught. We believe that the time has come for a fresh start to efforts to break the deadlock.”

There are currently disputes over the basics of aircraft noise with opponents of Heathrow claiming the Davies commission is basing its plans on an out-of-date survey that suggests communities do not become annoyed by overhead flights if they are below a 57 decibel benchmark, a finding based on a contested survey conducted in 1982.

An ombudsman could be responsible for advising on how best to compensate those experiencing noise, the best means of monitoring noise, and where possible to reduce or mitigate it. The ombudsman would also publish airlines’ noise performance, disseminate noise mitigation best practice and mediate in disputes between airlines and residents. It would also advise on the noise consequences of proposed changes to flight patterns, and in some version be given powers to fine airlines that fail to follow advice.

A similar body has existed in Australia since 2010, and in France since 2009. The French authority has powers to impose fines on airlines and lists all such fines, and the reasons for them on its website.

Other signatories to the Guardian letter include Dr Julian Huppert, the Liberal Democrat MP for Cambridge, Stephen Joseph chief executive of the Campaign for Better Transport, David Lammy, the Labour MP for Tottenham and a possible Labour candidate for the London mayoralty, Caroline Lucas, the Green MP, Philippa Roe, the Conservative leader of Westminster city council, Valerie Shawcross , Labour London assembly member for Lambeth and Southwark, Henry Smith, the Conservative MP for Crawley, and John Stewart, chairman of Heathrow Association for the Control of Aircraft Noise.

Some of the comments below the article:

Patrick Wintour is completely correct to label this alliance “unlikely” – noise annoyance from increasing flights grows as the numbers of take offs and landings rise to meet “predict and provide” forecasts. Noise reductions per aircraft on take off are not matched when the same aircraft land over resident’s heads, day and night. The Australian and French committees do not either control or reduce aircraft noise or annoyance let alone the worrying detrimental health impacts of noise around airports which increasingly cause premature deaths, admittedly in low but growing numbers, according to WHO investigations. Ombudsmen and other bodies simply fit and impose an airport’s existing and planned noise on local communities come what may – just ask those living around Sydney or Charles de Gaulle airports. Follow up article please Mr. Wintour?

The failure of Ombudsmen in other areas of Public Life does not bode well.

Better to have direct lobbying and pressure on MP’s and cut out the middleman.

Otherwise every question/complaint/policy etc etc would be bounced as “refer to ombudsman”.

The body would have to report to parliament,

Ah Yes ! Report back to Parliament.

Would be great were Parliamentarians able to provide the requisite critical aanalytical skills to actually make it a worthwhile exercise.

Perhaps the ombudsman could take a look at noise from military aircraft around Norfolk this winter/spring. The dogfighting training they’ve been doing most days for the last few months over this part of the world was fun to watch on the first day, but it’s getting a little bit much…

This is the letter: 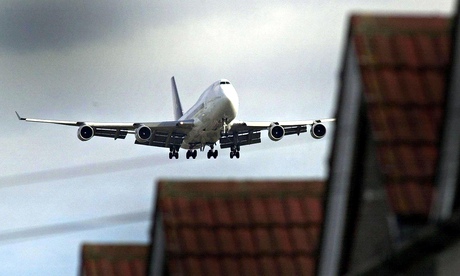 An aircraft noise ombudsman would protect the welfare of people who live near airports. Photograph: Tim Ockenden/PA

Air travel, and the aircraft noise that accompanies it, have become an integral part of modern life, but perceptions of aircraft noise vary greatly, mainly depending on where it is experienced.

For most people, who do not live near to a major airport, air travel is exclusively defined in terms of the considerable economic or social benefits that it brings. On the other hand, for those who live near major airports, aircraft noise can be an imposition. The time has come to adopt a fresh approach, to restore trust and give people the confidence that their legitimate grievances are being addressed.

We believe that the establishment of an independent aircraft noise ombudsman, set up at arm’s length from government and the industry, could play a fundamental role in further establishing trust and confidence, thus bringing about a fair and reasonable balance between increasing demand for flights and noise control.

Building on the common ground and goodwill built up among the interested parties, the ombudsman would collaborate with all of them to report on noise in an open, transparent and intelligible manner, and to deal with noise limitation problems fairly and sustainably.

We therefore call on the government and politicians of all colours to work collaboratively with all stakeholders on designing, and thereafter the early establishment of, an independent aircraft noise ombudsman to further enhance and protect the welfare of people living near airports.

In its interim report published on 17th December 2013, the Airports Commission recommended to government “… the establishment of an Independent Noise Authority to provide expert and impartial advice about the noise impacts of aviation and to facilitate the delivery of future improvements to airspace operations.” GACC – the Gatwick Area Conservation Campaign – has responded to this suggestion with a lot of caveats. GACC would welcome the authority if its main purpose is to reduce aircraft noise, but not if its main purpose is to persuade local residents to relax their opposition to a new runway at Gatwick. Residents want the noise to be reduced, not ‘mitigating’, and not ‘reducing the number of people affected’ if that means merely making noise worse for fewer people. . There have been years of unsatisfactory complaints mechanisms on aircraft noise, and also of broken assurances from the aviation industry. “A single point for complaints, an aircraft noise ombudsman with power to order improvement or compensation, would be welcome. But we do not see this in the recommendations of the Commission’s Interim Report.” There are fears that the new body will be “long grass into which difficult issues could be consigned.” A body designed to smooth the path of a new runway, whether at Gatwick or elsewhere would be vigorously opposed.