Gatwick airport has started a period of 6 weeks of consultation on its plans for a 2nd runway. The consultation is something of a PR exercise,  as the Airports Commission has only short listed the wide spaced runway option. Gatwick Airport is, for some reason best known to itself, including the narrow spaced runway (which it does not want) in the consultation options.  There is a series of exhibitions planned, by Gatwick airport, in a number of towns and villages over the coming weeks, with the first today in Crawley – the town which might be the worst affected by a 2nd runway. There was spirited opposition by people fighting plans for a new runway, and especially those who have recently found themselves under a  new “trial” flight path.  Feedback from the exhibition was that it was well attended, by several hundred people, many of whom appeared to be against a new runway.  One of their questions was how to fill in the forms, to clearly convey their opposition to any runway – there is just one box  people can tick, on the last page, in Section D, “None of these options.”
.
Tweet 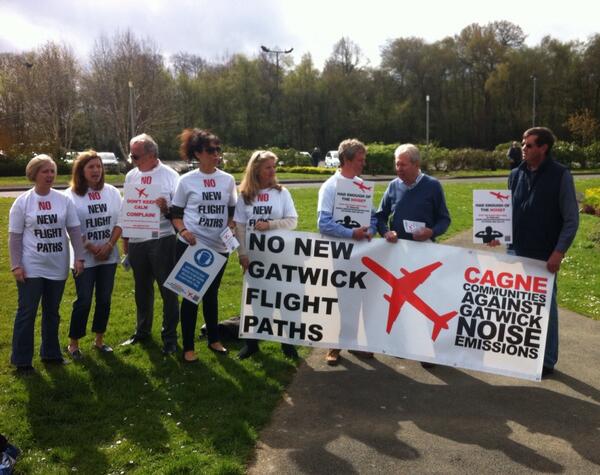 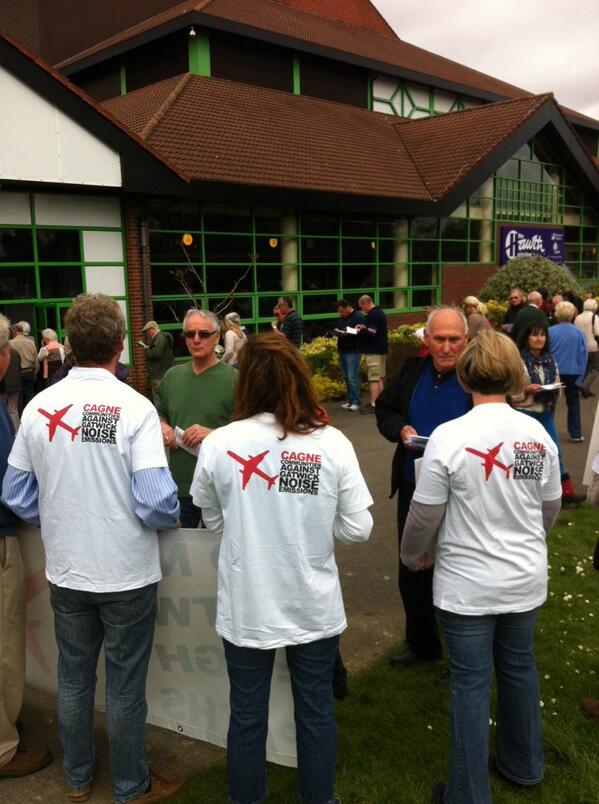 There was spirited opposition by people fighting plans for a new runway, and especially those who have recently found themselves under a  new “trial” flight path, which has been instigated (for 6 months) by GAL and NATS, without any prior notice or consultation with those now badly affected.

Feedback from the exhibition was that it was well attended, by several hundred people, the majority of whom appeared to be against a new runway.  One of their questions was how to fill in the forms, to clearly convey their opposition to any runway. The forms only have one box, somewhat concealed in section D, by which respondents can tick “None of these options.”

There were people – around 300 – queuing outside the venue at 11am. There was a lot of interest and support for the campaigners against a new runway.

People were not aware there was a box they could tick, to demonstrate their opposition to any new runway.  Campaigners were able to explain to many people that the “None of the above” box was on the last page, (Section D,  and also that people need to be careful how they fill in the detail which comes before it – several multiple choice sections.

Wandered about listening to peoples reaction, a significant number were somewhat taken aback at the scale of the development proposed. A 2nd runway with a new terminal would bring Gatwick to around the size of Heathrow today.

Many people were definitely against a  new runway, though there were a number who supported the runway plans, whatever  the consequences.

Speaking as the consultation on the options for a second runway got underway, CAGNE Chairperson, Sally Pavey said:

“Gatwick do not seem willing to give residents new flight paths route maps that a new runway would demand, you have to ask why?” 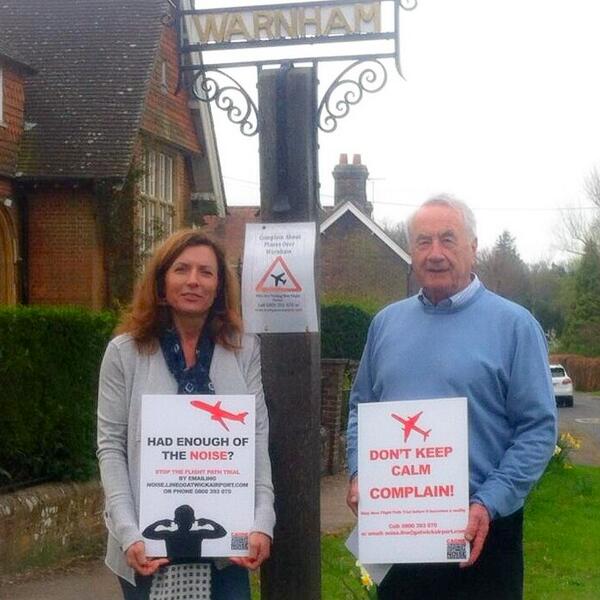 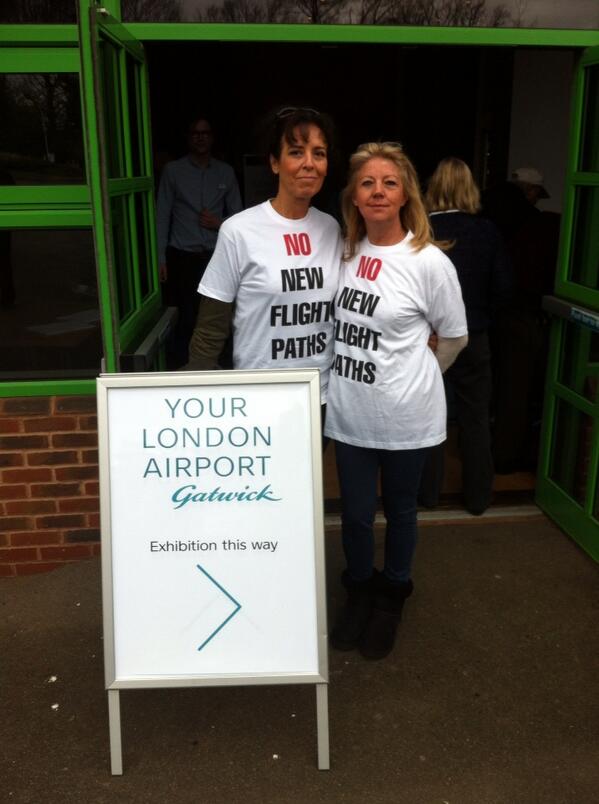 Consultation contains no proper NO option:

In the consultation, the ONLY option through which someone can express their opposition to any new runway is a tiny option in section D.  As copied below:

The consultation response form is at

Details of the consultation:

Gatwick consultation published: A proper consultation would have given the public a straightforward chance to say ‘No’

Gatwick Airport Limited (GAL) has put forward 3 options for a 2nd runway at Gatwick and is now asking for comment from the public to its consultation. They key omission in their consultation is a proper option to say NO to any new runway. A proper consultation would have given the public a straightforward chance to say ‘No’ at the start of the response form. As it is, there is a small box buried in section D with the option of “None of these options”. Gatwick is asking people to choose between a narrow spaced runway (something the airport does not want, as it would not be practical – so it cannot be considered a serious option) and whether a wide spaced runway(1045 metres south of the existing runway) should be used for both landings and take offs, or for just landings or take offs, at one time. The Airports Commission has effectively already ruled out the narrow spaced runway, so its inclusion in the consultation seems to be a bit of a PR exercise. The purpose of the consultation is to help Gatwick get their runway plans approved, and if possible, keep public opposition to a minimum. Consultation ends 16th May (which is the date all runway proposals must be submitted to the Airports Commission).

There will be a series of exhibitions: