Manston Airport: KLM last flight today and it ‘will not return’

KLM’s last flight will leave Manston on 9th April morning. The Dutch airline has confirmed that will not return to an airport threatened by closure even if a buyer is found.  Up to 150 mostly part-time jobs were put at risk last month when loss-making Manston revealed it was in talks over a possible closure. KLM then announced it would axe its Cityhopper flights from 10 April.  It began operating twice-daily return flights to Amsterdam in April 2013. KLM Cityhopper managing director said it was impossible to do “business in a shaky environment”.  “We can’t flip-flop in and out all the time. That is not the way we work.”  An initial offer for the airport from an unnamed buyer was withdrawn without explanation last week and there are currently no offers. Strangely, Manston is UKIP’s site of choice for a new south east hub airport – they oppose Heathrow expansion. Supporters will wave off the last KLM flight with posters and banners. The airport has said it will remain operational until at least the end of April and staff would be given 10 days notice of closure thereafter. Planes are sometimes landed there in emergencies.
.
Tweet 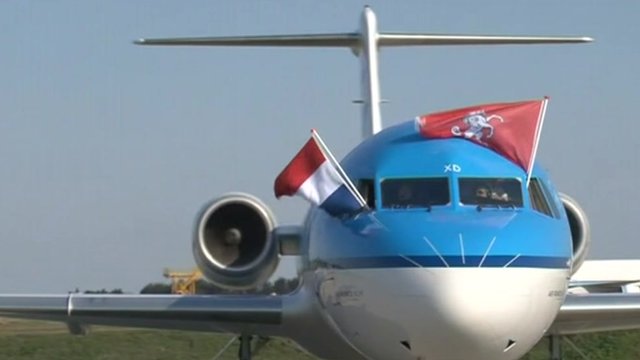 Dutch airline KLM will not return to an airport threatened by closure even if a buyer is found, it has confirmed.

Up to 150 mostly part-time jobs were put at risk last month when loss-making Manston Airport in Kent revealed it was in talks over a possible closure.

KLM, which began operating twice-daily return flights to Amsterdam last April, then announced it would axe its Cityhopper flights from 10 April.

The last flight will be at 10:30 BST on Wednesday.

KLM Cityhopper managing director, Boet Kreiken, told Air Transport World that it was impossible to do “business in a shaky environment”.

“Now it is game over; we will redeploy the aircraft. We are gone.

“We can’t flip-flop in and out all the time. That is not the way we work.”

Manston Airport was bought by the co-founder of the Stagecoach Group, Ann Gloag, for £1 from the New Zealand company Infratil in October.

Since then it is understood the airport has been losing about £10,000 a day.

A 45-day consultation on its possible closure is due to end on 11 May.

An initial offer for the airport from an unnamed buyer was withdrawn without explanation last week.

On Tuesday, the owners told the BBC there were “no offers on the table”.

The airport has said it will remain operational until at least the end of April and staff would be given 10 days notice of closure thereafter.

Protestors fighting the closure of Manston Airport will wave off the last KLM flight today.

Members of the Save Manston Airport (SMA) group will gather at the airport cafe at 10am for a show of solidarity with the community and staff.

They have set up a Facebook group “Waving off last KLM plane” and will be drumming home a message emblazoned on posters, banners and T-shirts.

The final flight to Amsterdam is due to leave at 10.35am.

SMA are continuing their battle for the airport and have this week “blitzed” the media, stating the case for Manston Airport which they describe as “a historic site of 700 acres of currently untapped potential.”

A huge groundswell of local support for the closed Facebook Save Manston Airport group has seen its numbers rise to 2,412 in just days since news of the facility’s possible closure became public on March 19.

The group has also driven support for a petition started online by SMA founder Dan Light. It currently has nearly 14,000 signatures.

A new statement by SMA to the media at large asks: ”With the possibility of a major South East cargo facility, a business travel hub or a world-class aviation training school, many wonder why the site is earmarked for closure.”

It continues: “If the site was to be shut down, a likely prospect would be rows of ‘shoe box’ houses or yet another retail park – an undeniably devastating end to a site that defended Britain throughout both world wars and the Cold War.”

Local residents are dismayed at the decision which will see 150 staff redundant and a knock-on effect on local business, trade and travel in the most deprived area of Kent.

SMA states the airport is “ripe” for additional hub connection flights, in the wake popular past summer and winter holiday flights.”

The group emphasises the location as a prime site for more extensive business opportunities, due to its location and facilities.

Rather strangely UKIP backs Manston as the site of a new hub airport for the south east of England:

The UKIP Hillingdon page says:
Our solution is to develop the existing airport at Manston in Kent (Kent International) as a second, complimentary hub to assist Heathrow.
Manston has the second largest runway in the UK, and can already accommodate the largest airliners including the Airbus A380 (Pictured above). Indeed, it is a designated divert airfield for both Heathrow and Gatwick in the event of problems and has a high level of available safety equipment – BA already use it as a training facility for their pilots.
No demolition of houses would need to be undertaken as would be the case with Heathrow expansion, plus the pollution and noise aspects would be minimised by flightpaths that come in over the channel. The local council are in favour of the project as it would bring much needed jobs to the area (Whilst leaving Heathrow to operate in West London and preserve those jobs that already exist for the communities in Hillingdon and Hounslow)
Expansion of Manston would be far less expensive than the alternatives – With the runway already in place (Plus wide enough that side by side landings would be possible at a future date with minor modifications if demand increased drastically), the only major infrastructure upgrades required would be a revamp of the terminal buildings and links to existing road and rail infrastructure.
http://www.ukiphillingdon.com/?page_id=9395
.
another UKIP comment was ( FT  2013):
“….it turns out that Ukip has dropped its plan for an airport in the estuary, and it is now inclined to support the expansion of Manston airport in Kent. That site is “pretty near” HS1, said the spokesman: although he is not sure how near precisely.”
http://blogs.ft.com/westminster/2013/04/when-ukip-called-for-three-new-high-speed-rail-lines/