Luton Airport operators LLAOL have announced that Eric Pickles, Secretary of State at the DCLG, has decided not to call in Luton airport’s expansion plans. This means Luton Borough Council can now grant planning permission for works designed to achieve a doubling of annual passenger capacity. Local opponents of the expansion are horrified and saddened. Earlier a local opinion poll showed some 70% of the public who responded to the consultation over Luton Airport Expansion said “NO”  to it. Local community group opposing the expansion, HALE, commented that the application is effectively large enough to be a NSIP (Nationally Significant Infrastructure Project) as it could perhaps add 10 million passengers per year. NSIPs have to be called in, as their scale and the extent of their influence  warrant proper scrutiny, in detail.  The airport and the government, have failed to take proper account of the local impacts of an extra 9 million passengers per year on local transport infrastructure, and the effect of noise from 60% more flights. “The throwaway comment at the end about being a good neighbour is meaningless …” Luton Council gave consent to the plans in December but Eric Pickles asked to review the decision.
.
Tweet

Luton Airport operators LLAOL have this morning announced that Eric Pickles, Secretary of
State, has decided not to call in the expansion plans, meaning that Luton Borough Council
can now grant planning permission for works designed to achieve a doubling of annual
passenger capacity.

Reacting to the news, Andrew Lambourne from HALE said “The government is hell-bent on
expanding airport capacity in the South East, come what may. Regardless of the fact that
70% of the public who responded to the consultation over Luton Airport Expansion said NO,
ignoring the fact that aviation is the fastest-growing source of greenhouse gases, and
despite the application technically constituting a nationally significant infrastructure project,
Eric Pickles has failed to call this application in for proper scrutiny.”

He continued “The airport’s announcement this morning mentions everything except the
key local issues: the effect of an extra 9 million passengers per year on the already crowded transport infrastructure, and the effect of noise from 60% more flights. The throwaway comment at the end about being a good neighbour is meaningless unless the airport takes seriously the concerns about noise and puts in place measures to make a difference. That means a Noise Action Plan which has some real bite.”

London Luton Airport Operations Ltd (“LLAOL”) and its new owners, Ardian and Aena, are pleased that the Department for Communities and Local Government has confirmed that Luton Borough Council may proceed to grant consent for its planning application.

Our application to develop the Airport has been subjected to intense and rigorous scrutiny over the past 12 months from neighbouring Councils, independent third party specialists and by the Local Planning Authority, who twice extended the period required to review the plans.

Before the plans were formally submitted, proposals to improve the Airport were subject to two public consultations.  65% of respondents who took part in the consultation on LLAOL’s development plans said they supported proposals to develop the Airport. They all stated their support for the economic benefits to Luton and the wider region, and the need to generate 5,100 new jobs, including a contribution to a reduction in youth unemployment.

Construction will take place over three phases and will:

– Expand, modernise and remodel the terminal building to accommodate and equip:

– Dual the road from the Holiday Inn Roundabout to a newly configured road system in front of the Central Terminal Area;

–  Build a new parallel taxiway to unlock capacity for an additional 6 million passengers a year from the existing runway;

Glyn Jones, Managing Director of the Airport said: “We are delighted that after a thorough process, the Council can proceed to grant planning permission for London Luton. We see this as a real vote of confidence in the Airport and its future, underlining the determination of our new owners, Ardian and Aena, to develop and radically improve London Luton and deliver a better airport experience for our passengers in the years to come. The opportunities it brings for the local economy in terms of jobs and investment are significant, and Luton can now press ahead with making its local airport bigger and better, while remaining a good neighbour.”

London Luton Airport is one of the UK’s largest airports and carried 9.7 million passengers in 2013. The Airport directly and indirectly employs over 600 and 8,000 staff respectively and is a key economic driver for the region.  easyJet, Wizz Air, Ryanair, Monarch, Thomson, EL AL, Atlasjet, Blue Air, TAROM and Carpatair operate from the airport, departing to over 100 destinations including services to Europe, Africa, and Asia, with onward connections to Mumbai, Hong Kong, Johannesburg, Beijing and Bangkok via Tel Aviv. 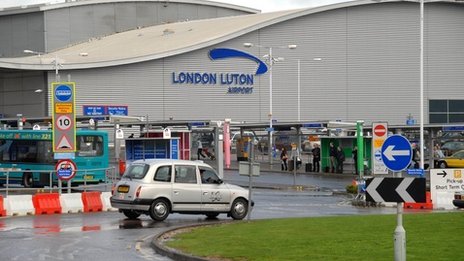 Luton has the fifth largest airport in the UK

Expansion plans for London Luton Airport that would double its capacity to 18 million passengers a year have won government approval.

Campaigners against the expansion have said it will bring an unacceptable increase in noise and air pollution.

The airport, which currently is the UK’s fifth largest, handled 9.7m passengers in 2013.

Airport managing director Glyn Jones said the government’s approval was “a real vote of confidence in the airport and its future”.

“The opportunities it brings for the local economy, in terms of jobs and investment, are significant and Luton can now press ahead with making its local airport bigger and better, while remaining a good neighbour,” he said.

“Planes will be taking off earlier in the morning and later at night.”

The council said its December decision was subject to a range of planning conditions addressing concerns over noise, night flying and other environmental issues, including road improvements.

.
Comment from a Luton resident, already badly affected by Luton airport noise:
In a passable imitation of Pontius Pilate the announcement from  [Eric Pickles ‘] office says:
The Government is committed to give more power to councils and communities to make their own decisions on planning issues, and believes planning decisions should be made at the local level wherever possible.
To have denied the many communities adversely affected by the airport’s expansion the thorough examination of the proposals, and the many assumptions and assertions on which it is based, by the independent Planning Inspectorate is “shameful”.
.
.
.
.
.
.