Lydd Airport Action Group (LAAG) is disappointed that they have been unable to quash the government’s decision to grant Lydd Airport permission to extend its runway and build a new terminal to support a throughput of 500,000 passengers per annum. LAAG and the RSPB both challenged the government’s decision.  Their Section 288 Appeal focused heavily on process, not the merits of the facts.  The impact of allowing the expansion of Lydd airport is likely to be highly negative for many people in the area, not to mention wildlife. The airport development will lead to the introduction of large aircraft, such as the Boeing 737, taking off and landing within 60 seconds flight time of the Dungeness Nuclear power complex. No other regional airport in Europe, and possibly the world, will be located as close to a nuclear power complex. LAAG contends this development will result in the possibility of an aircraft accident at the Dungeness Nuclear power complex. LAAG believes Lydd Airport’s expansion is not in the public interest.  RSPB says the area round the airport is of “exceptional” importance to birds and the expansion would damage unique habitats on Romney Marsh.
.
Tweet

Lydd Airport Action Group (LAAG) is disappointed that we have been unable to quash the government’s decision to grant LyddAirport permission to extend its runway and build a new terminal to support a throughput of 500,000 passengers per annum.

A Section 288 Appeal focuses heavily on process, not the merits of the facts. This development will lead to the introduction of large aircraft, such as the Boeing 737, taking off and landing within 60 seconds flight time of the Dungeness Nuclear power complex. No other regional airport in Europe, and possibly the world, will be located as close to a nuclear power complex.

LAAG contends this development will result in the probability of an aircraft accident at the Dungeness Nuclear power complex being outside the threshold which the nuclear regulator regards as acceptable.

Lydd Airport’s expansion is not in the public interest.

Expansion of Kent’s Lydd Airport to go ahead 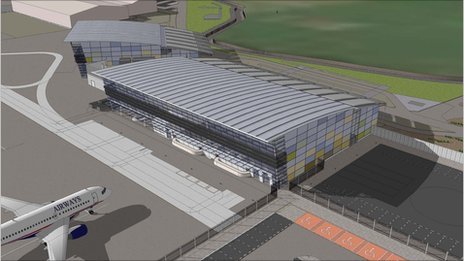 Lydd Airport bosses want the airport to take up to 500,000 passengers a year

The expansion of Lydd Airport in Kent can go ahead after a legal challenge to the government’s approval was dismissed in the High Court.

The £25m project for the airport includes a runway extension of almost 300m (984ft) and a new terminal block.

A joint legal challenge was launched by the Royal Society for the Protection of Birds (RSPB) and the Lydd Airport Action (LAAG) Group.

It follows the closure of Manston Airport, about 40 miles (65km) away.

The RSPB had argued that land around the airport – known as London Ashford Airport at Lydd – was of “exceptional” importance to birds and the expansion would damage unique habitats on Romney Marsh.

Mr Justice Ouseley, sitting in London, dismissed the challenge saying that “none of the grounds of challenge succeed”.

He noted that the airport had been described by a planning inspector as being “in a sensitive location”.

The judge ruled there was “no error of law in his acceptance of the safety evidence” that the level of risk was acceptable.

He refused permission to appeal, but the campaigners can still ask the Court of Appeal itself to hear their case.

Samantha Dawes, from the RSPB, said the decision was “extremely upsetting and disappointing”, and it was not ruling out further action.

Louise Barton, of LAAG, added that expert advice obtained by the group had shown the development was “dangerous with respect to nuclear safety”.

Lydd Airport executive manager Hani Mutlaq said: “The judge has today confirmed what we all knew: there was no legal basis for an appeal against the government’s decision to back our exciting plans for the redevelopment of Lydd Airport. 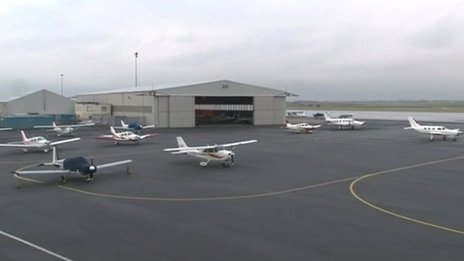 “With this distraction behind us we can press ahead. We hope to invite contractors to tender for the runway construction project in late summer and anticipate that work will begin before the end of the year,” Mr Mutlaq said.

Michael Walsh, from Friends of Lydd Airport, said he expected that “at least four or five thousand jobs” would be created for “this very deprived area”.

The Communities Secretary and Transport Secretary granted planning permission in April 2013 for a runway extension, which will allow passenger numbers to rise from 200,000 to 500,000 a year.

It followed a 42-day public inquiry, which was presided over by Mr Justice Ouseley.

Earlier news about the Lydd appeal:

Keith Taylor, Green MEP on Lydd airport’s future: We must look at fate of Manston and think again

Keith Taylor MEP says the Lydd airport area, in his European constituency, could be revived in a way to generate jobs and green growth – but not by expanding the airport or using it for yet more holiday flights. He is concerned about the low, and declining, number of airport jobs generated by ultra-low-cost flights, and that better employment could be generated on the site, with lower carbon emissions. Keith says the arguments for Lydd Airport expansion centres on an economic case that simply doesn’t stand up. In reality, Lydd’s remote position, and relatively inaccessible by public transport, means it already faces a competitive disadvantage compared with Gatwick. He says: “With the nuclear power station at Dungeness on its last legs, I believe it’s time to turn the peninsula into a green energy zone. I’d like to see schemes like the Marsh Millions built on to offer local green business incentives to set up shops in the area, and provide people with jobs to build a life on.” Lydd could be at the forefront of a new economic model, of economies refocused on tackling climate change.

Lydd airport has appointed a consultant for its expansion, but result of 2 legal challenges still awaited

Lydd airport has put out a press release, giving the impression that it is already getting on with building its 294 metre runway extension (plus a 150m starter extension). However, in reality, it has merely appointed some consultants. The airport is still waiting the result of the legal appeal against its planning application. There were two separate legal challenges against the application; one from the RSPB and one from the local community group, LAAG. If the appeal of either is accepted by the judge, the planning consent could be quashed. If that were the case, and one appeal won, the planning application has to be re-determined on the subject matters under question. Lydd is saying it has appointed Capita to design and manage its runway extension. Capita helped design Crossrail, and its job at Lydd would be to provide project, cost, construction and design management services for the airport as well as civil and aviation design services. Lydd says it is nearing completion of a number of pre-commencement conditions required to enable planning permission for the runway extension to be implemented.

The hearing is over. The timing of the judgement is unknown – it could take weeks or months. It depends on the Judge’s workload.

It only takes one party to be successful to quash the Secretaries of States’ decision – i.e. LAAG or the RSPB. If both parties lose their appeals, the airport’s development goes ahead, although it is possible that a qualified judgement(s) could ultimately lead to further restrictions on the airport.

The judge has no power to make a decision about the case itself. His role is to rule on the soundness of the government’s decision. If it is unsound and the decision is overturned, it must be re-taken. The mechanics of this are still not clear – whether this will be undertaken in the form of another public inquiry to re-examine the issue(s) at fault, or via consultation.

Legal challenge against Lydd airport expansion plans at the High Court by RSPB and LAAG.  21st to 27th January 2014

A legal challenge to the decision to allow expansion at Lydd in Kent is being heard on 21st and 22nd January, at the Royal Courts of Justice in London. A public inquiry was held into the applications by Lydd Airport in 2011 at which the RSPB raised concerns about the impact an expansion would have on the nearby protected wildlife area of Dungeness. The inspector found in favour of the airport’s proposals – and his report was subsequently endorsed by the Secretaries of State for Communities and Local Government and for Transport. After careful consideration the RSPB issued a legal challenge to the final decision based on the inspector’s report. The RSPB believes the stakes are too high to risk the future of one of the UK’s best and most important places for nature without testing the basis for this decision which they consider to be flawed. Dungeness is one of the most important wildlife sites in the world and it is protected at global, European and UK levels. It is home to many threatened species and is also a crossroads for migrating birds stopping off on migration. The Lydd Airport Action Group (LAAG) have a separate appeal which will be heard after that of the RSPB. They have concerns about the airport’s proximity to the nuclear power station. LAAG did not want to disclose further details of its case until the court hearing.      Click here to view full story…

A legal challenge to the government’s decision to allow the expansion of Lydd Airport in Kent is to be heard at the High Court on on 23rd and 24th January. The £25m project includes a runway extension of almost 300m (328yds) and a new terminal building. The airport site is close to the Dungeness nuclear plant, an RSPB nature reserve and a military range. The RSPB and Lydd Airport Action Group (LAAG) have lodged separate appeals against the expansion. After several years going through the planning process, the airport got planning permission in April 2013. LAAG has said the expansion would damage “the unique natural habitats on Romney Marsh and urbanise this important rural area”. LAAG also fear that the introduction of heavy aircraft such as the Boeing 737s “raised the probability of an aircraft accident at the Dungeness nuclear power complex leading to a serious radiological release to unacceptably high levels”. The RSPB said Dungeness was “one of the most important wildlife sites in the world and protected at global, European and UK levels”.    Click here to view full story…

April 10, 2013    Plans to expand Lydd airport have been approved by the government following a pubic inquiry. This tiny airport, on Dungensss and close to a nuclear power station, has ambitions to handle half a million passengers per year, and wants an extended runway and a new airport terminal. Shepway District Council gave permission for the expansion in 2010 but the application was called for a public inquiry. Now both Secretaries of State for Communities and Local Government (Pickles) and for Transport (McLoughlin) have approved the development – subject to environmental, noise and traffic conditions. The safety issue of an airport so close to a nuclear facility have not been examined fully or properly at the inquiry. The main opposition group, the Lydd Airport Action Group (LAAG) has fought tenaciously on the nuclear issue for years, and the European Commission has already started infringement proceedings under the pilot mechanism relating to the Nuclear Safety Directive. The government is also liable to legal challenge due to infringements of the EU Habitats Directive.    Click here to view full story…