If Heathrow got its way and somehow managed to get permission for a 3rd runway north west of the existing two, the M25 is set to become Britain’s first 14-lane motorway. Heathrow wants taxpayers to bankroll £1.2 billion of road and rail improvements including a 600m motorway tunnel under the new runway. ( Earlier estimates were £3-5 billion, according to Colin Matthews, at public meetings). The M25 would be widened to 14 lanes on a two-mile section from Junction 14, next to Terminal 5, to the junction with the M4.  The proposal is likely to provoke a furious reaction from environmental campaigner s and from road users and motoring organisations. Heathrow said the 600 metre tunnel would be built in parallel without disruption to the present motorway – a claim Gatwick said was unbelievable. Stephen Glaister, of the RAC Foundation, warned: “Even a day or two’s disruption on that vital stretch of road is a big issue. ”  Others have commented about the economic cost of delays caused by years of motorway disruption and hold-ups. Also the terrorism danger of a huge tunnel for vast numbers of cars, if a bomb was set off.


The M25 is set to become Britain’s first 14-lane motorway if a third runway is built at Heathrow Airport.

The airport wants taxpayers to bankroll £1.2 billion of road and rail improvements

including a 600m motorway tunnel under the new runway.

The M25 would be widened to 14 lanes on a two-mile section from Junction 14 next to Terminal 5 to the junction with the M4.

The proposal is likely to provoke a furious reaction from environmental campaigners.

to the government’s airports commission. 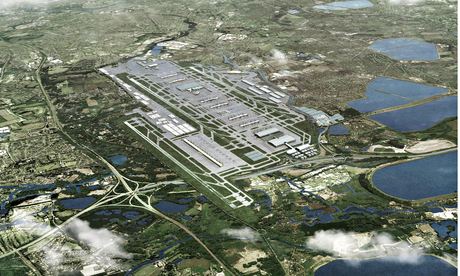 Heathrow would tunnel a 14-lane stretch of the M25 underneath a new third runway in an attempt to make its expansion plans work, the airport has announced.

It unveiled a revised £15.6bn plan for Britain’s biggest airport on the deadline for submission to the government’s Airports Commission, which will choose between Heathrow and Gatwick for an extra runway in south-east England.

Gatwick said its £7.8bn scheme for a second runway and new terminal was the only politically deliverable option.

The third Heathrow runway, which would allow up to 260,000 extra flights a year, would be slightly south of the site previously outlined to the north-west of the existing airport perimeter. The revised location would mean two historic buildings and 200 homes would be spared demolition in the village of Harmondsworth, where 750 homes would be destroyed.

A 600-metre, 14-lane tunnel would replace an existing section of the M25, passing under the runway. The taxpayer would contribute £1.2bn towards improved transport links. The airport said it would be built in parallel without disruption to the present motorway – a claim Gatwick said was unbelievable.

Stephen Glaister, of the RAC Foundation, warned: “Even a day or two’s disruption on that vital stretch of road is a big issue. Access roads need to be sorted out too. There’s a potential benefit in widening the motorway. This is not something that can be done on the cheap – but I feel that Heathrow have understood and are willing to bear the cost.”

The airport said the revised runway plan would mean 12,000 fewer people would be affected by significant aircraft noise by 2030. The total affected could fall to 165,000, with quieter planes landing further west on a steeper path.

But John Stewart, the chair of opposition group Hacan, said: “What these claims don’t take into account is the fact that it is the sheer volume of planes which disturbs people. It is an Alice in Wonderland fantasy to argue that over a quarter of a million planes extra a year will not bring greater noise problems for most residents under the flight paths.”

Heathrow will attempt to win over residents by setting up a £550m fund for compulsory purchase and improved noise insulation packages. It has also promised green space and flood protection.

John Holland-Kaye, who will succeed Colin Matthews as the airport’s chief executive in July, said it would “put a green ribbon around Heathrow”.

He said a shortage of capacity meant passengers were paying over the odds at Heathrow, and a third runway would stop fares spiralling further. A new runway would contribute £100bn to the national economy and connect all of the UK to global growth, he said.

But Gatwick said the economic benefits would be even greater if an additional runway were built at the West Sussex airport rather than Heathrow. The development would allow more passengers to fly, and lower fares through greater competition, the airport said.

Stewart Wingate, the chief executive of Gatwick, said: “What we’re trying to achieve is a more competitive airport market. After decades of dither and dather, it’s important that ours is deliverable. Heathrow just can’t be delivered. As the mayor says, politically Heathrow is just too toxic.

“Why would you choose to fly a quarter of a million more planes every year over one of the world’s most densely populated cities when instead you can fly them mostly over fields? Why tunnel part of the busiest motorway in Europe – the M25 – causing serious traffic disruption, when you can build on land already set aside for expansion? The choice is an obvious one.”

Gatwick said the significant noise impact of a second runway would affect only 14,000 people.

Airlines also questioned whether expanded airports would mean lower fares. EasyJet, the major airline at Gatwick, said its calculations suggested that increased landing charges would exceed profit margins on existing fares. Carolyn McCall, easyJet’s chief executive, said that passengers should only pay for what they use and need, and not subsidise future infrastructure now. Instead of lower fares, she said, “we are nervous that the opposite could happen”.

Three alternatives have been shortlisted by the Airports Commission, led by Sir Howard Davies, to add capacity in south-east England.

An alternative Heathrow development has been proposed by the Heathrow Hub group, to lengthen and in effect split the two existing runways. It says its plan could spell the end to night flights, and would not mean new communities suffering noise disruption. It also proposes a major new passenger facility nearby, connecting Heathrow to national rail networks.

Boris Johnson’s Thames Estuary proposal is still being considered for a possible 11th-hour reinstatement, and was not required to submit full plans to the same deadline. The mayor’s aviation advisor, Daniel Moylan, said that the new detail showed Heathrow had “understated the costs and disruption and that is starting to unravel. This is all about private shareholders without considering the public welfare. Until now Heathrow has been saying you won’t feel a thing .. Now they’re talking about a congestion charge and admitted that you need to put the M25 in a tunnel.”

AA final recommendation on Britain’s next runway will be made after the 2015 general election, although no party has pledged to implement Davies’s findings.

Environmental groups warned that said a new runway was not a foregone conclusion. The World Wide Fund for Nature said: “There remain very serious issues about whether building a new runway is realistically compatible with the UK Climate Change Act.”

Some of the comments under the article:
Why tunnel part of the busiest motorway in Europe – the M25?
Why indeed?
They should have crossing gates, like they have at Gibraltar airport.
…….
Because unlike Gibraltar airport, the gates would have to be lowered every 30 seconds or so.

I think the concept of a fourteen lane motorway is lost on most people. A good percentage of drivers cannot cope with an 8-lane version; many regularly ignore the highway code and laws – to the detrement of the safety of others.

I’ve read several reports, and they all fail to indicate where the £15.6 billion (Heathrow) or £7.8 billion (Gatwick) is coming from (in fact, they all read like rewritten versions of the same press release).

The Gatwick guy is keen to point out that his bid is only half as ridiculously expensive as Heathrow’s, which shouldn’t be of any consequence if the money is a normal business loan. So I’d guess that “the taxpayer would contribute £1.2bn towards improved transport links” isn’t the only public subsidy the airports’ owners will be getting in our wonderful ‘free market’ system.

Let’s just turn the whole island into a giant airport. Or alternatively, let’s just stop flying about quite so much. Is it all really necessary?

I presume this is a late April Fool?

Is there any thought going into the future patterns of how people will do business and work – i.e. working from home, video conferencing, use of screen sharing technology.
I know people will still want to go on holiday but I project a big dip in buiness travel. Especially as the government may try and tax businesses to shy away from doing it to reach carbon emission targets.

If they have £15Bn to spare, then it could be spent on most of the other airports and conurbations round the country, or maybe use it for building some social housing; lets have a moratorium on any further development south of Watford for the next ten years and get some economic balance into the country.

Be cheaper to build a new capital city somewhere with more room for an airport.

Or, just cap the number of slots to that which current capacity can comfortably support (a bit less than todays air traffic) and auction them, with some of the proceeds going to build better rail links.

Make flying shorthaul more expensive (as well as slower, which it already is for most under 2 hour flights) than rail travel, and people will switch to rail.

The M25 is already one of the slowest roads in the country much of the time, so ten years of major disruption is going to take London’s orbital car park towards closed for business!

Wouldn’t it be a perfect location for a terrorist attack? You can’t get much closer to Heathrow and by exploding a tanker or something in the tunnel would not only knock out the runway but also block the main access route to Heathrow and presumably half the emergency teams’ access too

The area around London Airport is one of the most densely utilized parts of London, precisely because there is an airport there. The construction process of increasing its size by one third, and the subsequent increase in land utilization, will make it hell on earth to get there, hell on earth to live there and hell on earth to work there.

I STRONGLY SUGGEST THAT WE DO NOT DO THIS!

What part of “No third runway at Heathrow” do these people not understand?
No matter how many times expansion plans are rejected, some organisation or other interested body comes up with yet another scheme involving an additional runway wrapped up in some grandiose plan.
The objections are well documented, and yet there seems to be no end to the “expansionists” determination to make Heathrow even bigger.
It seems to be a case of “no matter how many times you reject our expansion plans, we will keep on submitting applications until you give in and agree”. Complete lunacy