The campaign at Notre Dame des Landes, against the planned new Nantes airport, continues. On the weekend of 5th and 6th July, a huge mobilisation is planned, with people coming from areas across France to show their opposition and resistance to the plans.  The campaign is adamant they want nothing less than the abandonment of the airport plan.  The project is held up still, because of legal appeals and EU Directives on water and threatened species, but it has not yet been cancelled. More people are now living on the ZAD, and more of it is now being cultivated, with a farm saved.  Some delay is due to an environmental assessment being needed on the whole project, rather than separate bits of it.  The Socialist and Green Parties, and the new Minister for Environment, Ségolène Royal, agreed after the recent election that no work can start till all the legal processes are completed. Local campaigners want farmers and residents to be able to plan their futures, free of the airport threat.  They hope this project, and other “Grands projets inutiles et imposés” that are land-hungry, biodiversity destructive, guzzling aquatic and fossil fuel resources as well as public subsidies, can be stopped.
.
Tweet 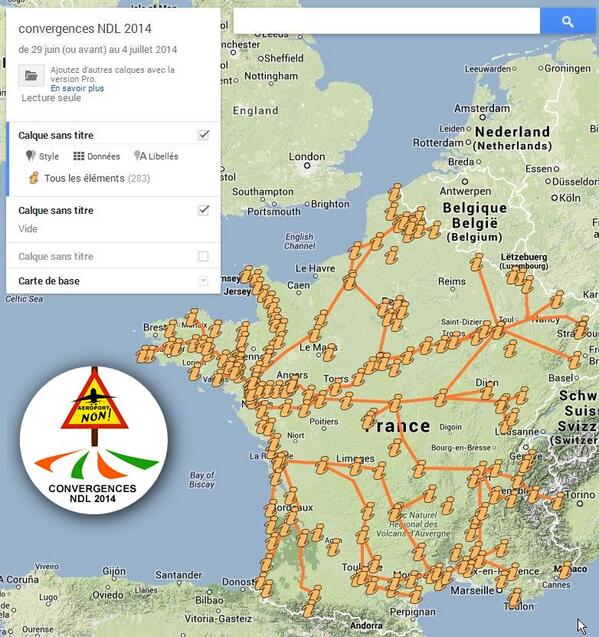 Go ahead towards the final withdrawal of the project!

Whilst preparing our summer event we are at a turning point. Although we have progressed: works have been delayed, the withdrawal of the project which is the aim of our struggle, has not yet been obtained.

We hold our ground! We hold it on our three pillars!

We hold our ground on Zone!

After the autumn upheaval of 2012 and the ‘Cesar’ police action, resisting farmers, newcomers and supporting citizens, all together, have preserved the land of the ZAD [Zone à Défendre].

Life is getting on, long term agricultural projects take shape with ‘Sème ta ZAD’ [Sow the ZAD] and ‘COPAIN’ on the farm at Bellevue and on threatened lands. The Fighting Naturalists have run various field studies, enriching our knowledge and expertise and reducing to little the « compensations » planned by AGO Vinci. Links have been created, the ZAD counts more inhabitants and is now better cultivated than it has ever been.

Farmers as well as ordinary people showed their enormous support towards the defence of the threatened land through the demonstration on February 22nd.  The flash mobilization for Saint-Jean du Tertre saved the farm and gave us guarantees for the future.

We hold our ground on the legal level!

After the EU Committee on Petitions in Brussels decided to keep open our petitions, in September 2013, in spite of the promoters’ will to empty the ZAD, the decrees allowing works to begin were delayed until the end of December:  the Prefect might have been conscious of their weakness in regard to the law…They were immediately contested, while different appeal procedures concerning expropriations are going on persistently before the courts at all levels. We heard recently that the EU Committee started a penal procedure against France about the preliminary studies being cut into parts and the insufficient work on the impact on environment of the project as a whole!

We hold our ground on the political level!

Although the local promoters of the project have not been shaken on their (wrong) bases, the national political actors cannot ignore the subject any more. A major political agreement was wrought from the socialist party through a 28 days hunger strike in May 2012.  It said that no one could be expelled as long as some recourses had not been definitively judged.

In February this year, Jean-Marc Ayrault who was still PM had no other choice but to say that no works would start as long as all ongoing recourses had not been judged. This was confirmed by the Socialist and Green Parties agreement for the March local elections in Nantes and Rennes and again by the new Minister for Environment, Ségolène Royal.

The expressed political will to respect the current legal proceedings is a first step. Therefore, resolutely and serenely, we are looking forward to the closure of all the recourses especially those concerning water and threatened species regulations both on national and European levels.

In the meanwhile we do not give up on anything on the ground. The announced delays are not by themselves signs of the final victory, nevertheless they are quite a positive point. As time goes by it becomes more and more obvious that this project is absurdly outdated if we take into account existing knowledge and legislation!

What we want is outright abandonment of the project!

This would allow farmers and inhabitants to look ahead to their future and draft new long term plans. This would allow to achieve optimal operation of the existing airport when necessary.

Dropping the project would reinforce the determination and hope of all those committed to the fight against Big useless imposed Projects which are land-hungry, biodiversity destructive, guzzling aquatic and fossil resources and public subsidies.

Before the July 5th and 6th gathering on the lands of Bellevue in Notre-Dame des Landes, protest caravans will converge from all over France, starting where symbolic struggles are taking place. Join them massively on their way!

In 2013, « We are still here, still resisting, more legitimate than ever. Let’s bury the project! »

The final victory is within reach of our efforts!

Once again we must succeed in making this 2014 gathering-convergence a time of outstanding mobilization!