Up to 20,000 attended a damp but determined weekend at Notre Dame des Landes, against planned Nantes airport

Up to 20,000 or so people (estimates vary) gathered at Notre Dame des Landes over the weekend of 5th and 6th July, from across France, to support the campaign against the planned airport, and show their solidarity. Though dampened by almost continuous rain on the first day, spirits were not dimmed, and some 50 talks and debates went on – under canvas. There were also concerts by popular French singers, as well as stalls and activities for all ages. Some of those taking part in the weekend are opposing other Large Unnecessary Imposed Projects (Les Grands Projets Inutiles Imposés) across France, with a sincere desire to stop mega-projects that do great environmental harm, for dubious economic benefit. Work on the airport project has been frozen since 2012, largely due to legal obstructions. The last large protest by the Nantes opponents, organised by ACIPA, was on 22 February 2014, attended by between 20 000 and 50 000 people in streets of Nantes, which was severely policed, and from which there were injuries and some public damage.This weekend’s event was peaceful, and once the sun came out, the sky was filled with protest kites.
.
Tweet


Below are some articles about the Notre Dame des Landes gathering, on 5th and 6th July, in imperfect English (original articles in French).

John Stewart, (Chair of AirportWatch and of HACAN at Heathrow) attended the gathering. His comment:

“They came  from all over France and beyond.  They came in the weather so wet it would put West Wales to shame.  They came in record number.  Perhaps 20,000 people  – or maybe more – came to the protest weekend at Nantes.
The long-running campaign against a new airport at Notre-Dames-des-Landes in West France has become cause célèbre in France.  The protesters have gained so much support, including, critically, from direct action activists, that it is difficult to see the authorities finding a way to build the airport even if they overcome the legal obstacles and get hold of the money.
More widely, it is yet more living proof of the opposition new airports or new runways generate.  Nowhere in Europe can the authorities be confident of getting expansion plans through.”

More news about the gathering at http://www.scoop.it/t/acipa/?tag=NDL2014

Thousands of opponents of the project … by joe-en

Thousands of opponents of the proposed airport in Notre-Dame-des-Landes (44) flocked this Saturday, on the site to assist in the rain at large summer gathering of the movement and call for the abandonment of the project disputed transfer from Nantes-Atlantique Airport.

> Back to 15 dates in a controversial [Interactive Timeline] project
From all over France or other European countries, opponents flocked around the stands and marquees debates, but also on narrow roads near the site, which bouchonnaient as a day of going on holiday. In the late afternoon, between 7,000 and 8,000 people were indeed on the spot according to the organizers, more than 4,000 according to police, just before the concert headliners of the first day of the rally, Miossec, Sanseverino and Pigalle . Duflot and Bové support”In Brussels, we also have problems with the aircraft, it touches all people who are in this movement,” says Juliette, a young woman from Belgium with two friends, all three covered with long ponchos rain.

“We are farmers, for us it is important to defend the land to feed the people,” says Réjane a fifties activist first time came Loire-Atlantique.

“It should not be, because the development of air transport is a dead end, Airport Bouguenais (Nantes-Atlantique, Ed) works very well, a simple financial logic shows that the project of Notre-Dame-des- Landes is an aberration, “said Thierry, who came from Loire-Atlantique too.

Surprise guest, former Minister of Housing environmentalist Cécile Duflot arrived mid afternoon, at ease among his friends struggle. “We need to kind of pressure that we posed to the people who live and work here and who, for so many years, living with a sword of Damocles over the head. It has to stop now, “said MP EELV.

Not far from her, José Bové MEP EELV, said that “we are at a turning point in the struggle of Notre-Dame-des-Landes. It is clear that today the state is beginning to understand that this project will not succeed. ” Optimism tempered in the wet fields of Bellevue farm, north of the “Area of deferred development” or Zad project, now 18 months since the heart of the peasant resistance, debates succeed in capitals.

Opponents farm Thousand Cows in the Somme, the “No-Tav” (opponents of the Lyon-Turin railway line), through defenders AMAP (Association for the maintenance of peasant agriculture) or even opponents denouncing police violence use launchers soft ball all currents meet.

Artists also came to militants. “I am a kind of citizen who wants to ecology and who want a friendly environment, I have no desire there is an airport here,” says Sanseverino, making the balance of his concert in rain.

Optimism prevails, since the announcement this winter by the Government that the work will not begin until the end of legal proceedings. But Julien Durand, spokesman for the ACIPA, the main association of opponents, “as we will not have an official signature of the government adopting the declaration of public utility, the project can always go back.”

In April, the European Commission opened infringement procedure against France, which is accused of failing to conduct an environmental assessment of the controversial airport project.

The largest gathering ends tonight music. Since Saturday it has united some 22,000 people, according to the organizers.

The largest gathering of solidarity and music at Notre-Dame-des-Landes  came to an end on Sunday 6th July.

The 14th large anti-airport gathering started on Saturday and brought together 22,000 participants,according to organizers. The authorities say 12,000 people.

At the  rally there were also many debates and education sessions, with fifty meetings and forums.

On the occasion of their big summer rally, thousands of opponents of the airport project can be found on the site on Saturday.

Thousands of opponents of the proposed airport in Notre-Dame-des-Landes (Loire-Atlantique) Saturday began pouring on the site at the time of their great summer, rain rally to demand the abandonment of the disputed transfer from Nantes Atlantique Airport project.

The first debate, for example on the “civil disobedience”, began in mid-day under large tents set up in the fields around the Bellevue farm, became the center of peasant protest on the site for the airport, was a journalist of the AFP .

The promise  in the afternoon of the first day of the rally, of concerts by Miossec , Sanseverino or Pigalle promised to draw a lot of people – despite the rain. Sanseverino was already mid-day balance of his concert on the main stage at the bottom of a large banner which proclaims on yellow background, “Abandonment is now.” (L’Abandon. C’est Maintenant).

Set up all around the arena were stalls of various militant anti-capitalist and anti-globalization struggles, as opposed to the “farm thousand cows in the Somme, or No-Tav (not TGV Lyon-Turin), representing their own struggles.  Parties and opposition political groups opposed to the draft Notre Dame-des-Landes airport, such as EELV or the Left Party are also represented.

“The project can always come back”

The construction of the Notre-Dame-des-Landes Airport by the company,Vinci  which should have been completed in 2017, has been frozen since 2012 due to strong opposition both on the ground, and due to legal issues and political plans.

The government announced on February 28, through Jean-Marc Ayrault, who was then Prime Minister, that the work of the airport was expected to start  the end of legal proceedings.

“We are here to show our determination, as long as we do not have an official signature of the government adopting the declaration of public utility, the project can always come back,” said Julien Durand, the spokesman for ACIPA, main opposition group and organizer of the rally,speaking to AFP (Associated French Press).

Opposing the project are politicians of the party, as MEP José Bové EELV. “We are at a turning point in the struggle of Notre-Dame-des-Landes: it is clear that today the state is beginning to understand that this project will not succeed,” he says. The former Minister Cécile Duflot arrived in the middle of the afternoon. “We need to stop the kind of pressure that puts on people who live and work here and who for so many years have been living with the sword of Damocles over their heads; it has to stop now, “says a member of EELV (Europe Ecology Les Verts). 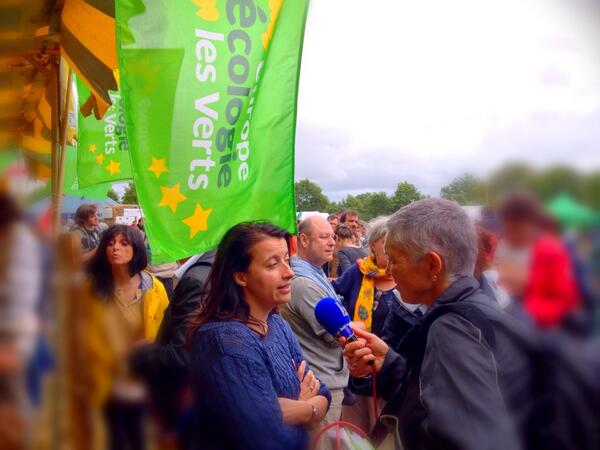 “We are here to show our determination,”

In booths set up all around the capitals of various militant anti-capitalist and anti-globalization struggles, as opposed to “the farm thousand cows” in the Somme, or No-Tav (not TGV Lyon-Turin), present their struggle. Artists also came to militants. “I’m kind of a citizen who wants to ecology and who want a friendly environment, I have no desire there is an airport here,” says Sanseverino by balance of his concert in the rain. “We are here to show our determination,” said Julien Durand, a spokesman for the ACIPA, main opposition group and organizer of the rally.

Last year, at the height of the summer rally, held on 3 and 4 August, between 9000 and 25000 people attended the event, according to the respective numbers of the organizers and the prefecture of Loire Atlantic.

Works on standby since 2012

According to the original schedule, the work of the airport tarmac, the concession was awarded to Vinci group, have been started in spring 2014 and the airport should be opened in 2017. But with strong opposition both on the ground that the legal and political, construction has been frozen since 2012. latest episode mark of protest, the demonstration of 22 February 2014 which was attended by between 20 000 and 50 000 people opposed to the project in streets of Nantes. This event was punctuated by intense clashes between anti-capitalist activists with radical forces. Dozens of people were injured on the side of police and three protesters have lost the use of one eye . The damage had been estimated at one million euros. In the aftermath, the government announced on February 28, by the voice of Jean-Marc Ayrault, then Prime Minister, that the work expect the end of legal proceedings initiated to start .

Some anti-system zadistes invited themselve into the meeting of political anti-airports which began there half an hour earlier, in under the big tent, because of the rain.

“Democracy is the shit”, “Stop all work”, they regularly interrupted speakers and wanted toget their points across though  organizers obviously did not want to give them the floor.

One of them has even asked to leave the tent. Which they did not do.

For several months, relations have been strained between historical opponents of the airport,  and some of zadistes who are occupying part of the land.