Reports on Thames Estuary airport plan show it is costly, risky for the taxpayer and a potential failure

Serious doubt has been cast on the prospect of a Thames estuary airport plan going ahead. Four reports have been produced for the Airports Commission, to aid their consideration of whether an estuary airport should be one of the short listed options to be taken forward, in September. One of three reports prepared for the commission published on Friday has said of the estuary plan: “Overall, the challenges to transition are considerable and amount to a significant cost and risk to the taxpayer in terms of commercial negotiations, infrastructure development and potential failure.” Another report says Heathrow would have to close if the estuary scheme went ahead and that Heathrow’s owners would have to be paid compensation of between £13.5 billion and £21.5 billion. The third report cited possible transport improvement costs associated with the new airport of between £10.1bn and £17.2bn for road, and up to £27 billion for rail. The report on environmental impacts which estimated that moving affected wildlife away from the new airport could cost as much as £2bn.

The bill for new transport links to a Thames Estuary airport could be more than double predictions, said experts.

The study comes after another found an estuary airport would have “large adverse impacts” on the environment.

“It’s bad enough he has spent millions in taxpayers’ money on promoting his fantasy. Now his proposals have been exposed as based on wildly inaccurate estimates.” Labour group transport spokesperson Val Shawcross said the study confirmed that the Mayor’s plan was “pie in the sky”, while the Greens’ Darren Johnson said: “Boris Island must now be dead in the water.”

The Airports Commission ordered four feasibility studies of an estuary air hub. The first looked at environmental impacts and was published last week.

The other three look at the impacts of moving a hub from Heathrow, the economic effects and road and rail links. It was the final report on transport, by engineering firm Jacobs, that outlined spiralling transport costs.

The Mayor’s 2013 estimate suggested road links would cost up to £10.1 billion and rail £13.5 billion. The Jacobs report claimed they may rocket to £17 billion and £27 billion respectively.

A report by PricewaterhouseCoopers said Heathrow owners may need compensation of £21.5 billion. Another by Leigh Fisher says the cost of tackling risks posed by the wreck of a Second World War munitions ship five miles from the airport site are unknown. But it concludes SS Richard Montgomery, still holding 1,500 tons of TNT, may have to be made safe or removed.

The Mayor’s chief aviation adviser Daniel Moylan said the reports would be analysed but he emphasised how they also highlighted economic benefits an estuary hub would provide. 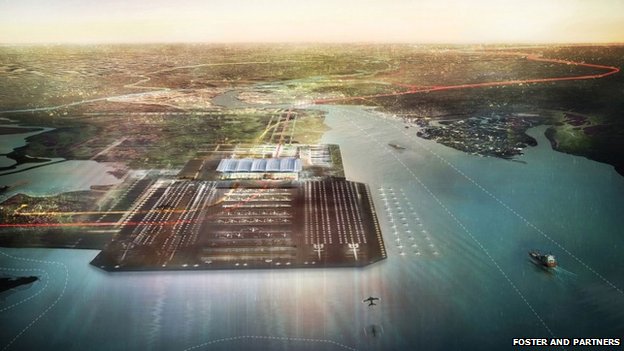 An airport in the Thames Estuary would present a “considerable cost and risk to the taxpayer”, according to reports published by the Airports Commission.

An estuary airport on the Isle of Grain has been proposed by London Mayor Boris Johnson.

Four studies into the feasibility of the airport have been published.

They state airlines and passengers believe the scheme would carry “significantly more risk than opportunity”.

One of the reports also stated that explosives on a sunken World War Two munitions ship in the estuary, the SS Richard Montgomery, would need to be removed or treated before the airport could be constructed.

It added: “Full containment or removal are deemed high-risk and high-cost options, potentially requiring evacuation of the local area for a period of many weeks or months.”

The Airports Commission has been tasked with examining the need for additional UK airport capacity. It has shortlisted three options, which include adding a third runway at Heathrow, lengthening an existing runway there, and a new runway at Gatwick.

However, the commission, led by businessman Sir Howard Davies, will also consider a new airport in the Isle of Grain.

The three latest reports looked at operational feasibility and attitudes towards the airport, socio-economic impacts and surface access.

The first report, which looked into the environmental impact of the airport, said it could cost up to £2bn to provide alternative habitats for wildlife if the airport was built.

Boris Johnson suggested the Isle of Grain in Kent as the site for a new, four-runway airport

One of the reports states that Heathrow would have to be closed for a new hub airport in the Thames to open.

It states: “Overall, the challenges to transition are considerable and amount to a significant cost and risk to the taxpayer in terms of commercial negotiations, infrastructure development and potential failure.”

Daniel Moylan, who is the mayor of London’s chief adviser on aviation, said: “Our team will now analyse these reports in detail but it appears they confirm the huge benefits to the country’s prosperity that would flow from moving Heathrow to a new location and prove that there are challenges, but no showstoppers, to achieving that.

“The case studies of how this has been successfully done in other countries are particularly valuable.

“Of course there are risks, but all the proposals being considered by the commission carry risk.

“The Airports Commission can have no alternative but to include the estuary option on its formal shortlist.”