Frankfurt airport currently has 2 passenger terminals with a capacity of approximately 65 million passengers per year, plus 4 runways. In 2009, the German government decided there should be a new Terminal 3 in order to handle the expected passenger flow of 90 million per year by 2020.  The new terminal is scheduled to be built by Fraport, south of the existing terminals. Fraport has now announced that it has been granted approval of its planning application, by the city of Frankfurt. However, it still needs a demand assessment. The building of a new terminal has been deeply controversial, and has been strongly opposed – as it is a means by which the airport can grow substantially. Fraport hopes the first phase of construction will start next year. Fraport say the airport will reach its maximum passenger capacity of about 64-68 million passengers a year by 2021 and that the new terminal when finished will allow it to serve up to 25 million more. Opponents say the airport already creates too much noise and does not need to be expanded. The CDU and the Greens said in their coalition agreement at the end of 2013 that they were in favour of looking at alternatives to building a new terminal. Opponents say they will keep fighting the expansion plans.
.
Tweet 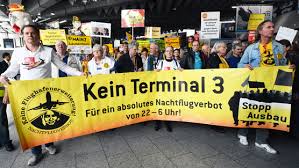 The city of Frankfurt has approved airport operator Fraport’s building application for a much-debated new Terminal 3 at Europe’s third-largest airport, the company said on Tuesday.

Airport expansion is a hot topic in Europe at present. A long-planned new airport in Berlin has been beset with delays and accusations of fraud, while in Britain, Heathrow and Gatwick are competing for the right to expand.

Fraport estimates the investment cost will be more than €2 billion (£1.60 billion) for the first phase of construction, which is due to start next year.

The company expects the airport in its current form to reach maximum capacity – of about 64-68 million passengers a year – in by 2021 and that the new terminal when finished will allow it to serve up to 25 million extra passengers a year.

Anti-airport campaigners, meanwhile, maintain that the airport just outside Frankfurt already creates too much noise and does not need to be expanded.

Campaigners in Frankfurt, who also want to see a night flight ban extended by two hours, had hoped that the new ruling coalition of conservatives and greens in the state of Hesse, where Frankfurt is situated, would do more to prevent expansion of the airport.

The CDU (Christian Democratic Union) and Green parties said in their coalition agreement at the end of last year that they were in favour of looking at alternatives to building a new terminal.

But while the building application has been approved, the project still has to undergo a demand assessment, the Hesse conservatives said.

“The state government is holding continuous talks with Fraport on this matter,” a spokesman said in a statement on Tuesday.

It is not yet clear when this assessment will be finished, a Fraport spokesman said.

Frankfurt airport served just over 58 million passengers last year, up 0.9% on 2012, but Fraport predicts growth of between 2% and 3%  this year.

The new terminal would be built in stages, with the first phase aimed at providing capacity to serve an additional 14 million passengers a year.

Fraport’s shares were up 0.8% by 1214 GMT, outperforming a 0.4% fall in the MDax index for medium-sized companies .MDAXI.

The state of Hesse owns about 30% of Fraport and the city of Frankfurt holds 20%.

The City of Frankfurt has issued a building permit to build a third terminal at Germany’s Frankfurt Airport (FRA) to help boost the airport’s ability to cope with rising demand for air travel.

FRA’s owner and operator the Fraport Group said the capacity of the existing two terminals to cope with an increasing number of passengers is expected to be “exhausted” by 2020, with growth already exceeding projections.

Fraport said long-term traffic forecasts issued by the German transport and digital infrastructure ministry indicate that the number of passengers will grow by an annual average of 2.5% by 2030, which makes aviation “Germany’s fastest-growing mode of transportation”.

However, Fraport said FRA “has already exceeded this value, posting average passenger growth of 3% in recent years”, as a result of “FRA’s significant international hub function”. Fraport said current trends point to passenger numbers continuing to rise, with growth reaching 2% to 3% by the end of 2014.

The modular construction of the new terminal will be implemented in phases, with the first phase to be completed “no later than 2021”, Fraport said.

The first phase will include the central terminal building and two piers designed to serve up to 14 million passengers each year. When fully completed, the new terminal will provide a total of 50 aircraft docking positions.

Fraport said the construction project, on FRA’s southern side, “is an integral part” of the airport’s expansion programme. FRA’s baggage conveyor systems and ‘Sky Line’ elevated passenger train network will also be expanded to link the new terminal to the existing terminals and airport rail stations.

Planning for the passenger terminal is focused on using “highly efficient energy standards” and the design of the building’s technical systems “will completely eliminate the need for external heating”, Fraport said.

Fraport’s executive board chairman Stefan Schulte said the group would continue to analyse passenger data to “assess requirements for future terminal capacity”. He said: “The deciding factor is that we will continue to be able to provide our passengers with the necessary capacity and a wide range of flight connections with the best possible services and processes.”

Schulte said: “German companies are very successful on the global market, which secures and creates jobs and prosperity in Germany. Prerequisites for this success are direct, fast and reliable flight connections to the rest of the world. This is the role of Frankfurt Airport for the region, the (federal) state of Hesse and Germany as a whole.”

Figures posted by Fraport earlier this year for fiscal year 2013 (4-page / 224 KB PDF) showed that revenue increased by 4.9% to €2.56 billion compared to the previous year, while the group’s operating profit rose to some €880 million, which was an increase of 3.7%. Passenger numbers at FRA increased by nearly 1% to more than 58 million. Fraport said cargo traffic at FRA also “developed positively”, rising by 1.4% to almost 2.1 million tonnes.

Opponents will continue fighting the airport’s growth.  On hearing of the planning permission for the 3rd Terminal, the “Kein Terminal 3”  (No Terminal 3) campaign on Facebook  said (approximate translation):

The planning application for Terminal 3 is approved – but our protest and our resistance are not finished yet!

The Working Group on aircraft noise and environmental invites people to the
1st Joint conversation about possible information and protest actions to “race day of the airport” on 24th August.2014 on the racecourse for an exchange of views on the current situation in the fight against airport expansion and for a liveable region.

Where? In the “Hirsch” in 60599 Frankfurt-Oberrad, Offenbacher Landstrasse. 289

Why not combine the pleasure of horse racing with a little information and protest against the destruction of our region through the airport’s expansion?

Who is motivated to present some information and mark our protest after the recent betrayal of the voters of the Greens “urban society”, when given the 8/24/2014 opportunity.

Last year, Fraport has advertised with the following text:
“Race day is supported by Fraport AG, which are also a sponsor for the main race.
As operator of the busiest airport in Germany, the largest local workplace of the Federal Republic and the economic engine of the Rhine-Main region, Fraport AG plays an important social role. Fraport AG is committed to the region and contributes to the attractiveness and quality of life in the Rhine-Main area …. “(2) ..