Monarch airlines plans to slash workforce by 1,000 jobs, up to 30%, to compete with Ryanair and EasyJet

Up to 1,000 jobs, about one third of its work force, will be cut at Monarch as it tries an overhaul to reposition itself as a low-cost airline competing with easyJet and Ryanair. Monarch is currently controlled by a wealthy Swiss-Italian family,  and has been undertaking a strategic review of its business in order  to attract new investors. It will drop its charter flights and focus on short-haul scheduled flights. It will cut its fleet of aircraft from 42 to 30. It will keep its focus on holiday destinations like Spain, the Canary Islands and Turkey but add more European cities and skiing destinations. Overall, it will fly more frequently to fewer destinations. Monarch has its HQ at Luton airport, is made up of Monarch Airlines, tour operator Cosmos Holidays and an aircraft maintenance division. They will no longer fly from East Midlands Airport. Monarch’s MD said “We’re on a trajectory of changing from a charter airline to a scheduled European low-cost carrier.” They recently ordered new planes, at the Farnborough air show.  This is a £1.75bn order for 30 new Boeing 737 aircraft to be delivered by 2020. They carried about 6.8 million passengers in 2013. .

Monarch airlines plans to slash workforce by up to 30% 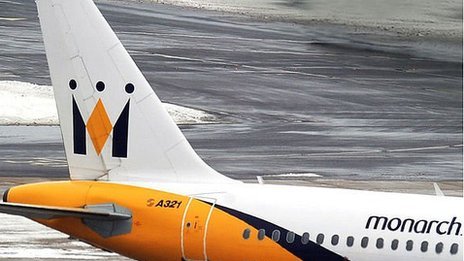 Monarch Airlines may cut as many as 1,000 jobs as part of a major strategic review that aims to cuts costs and may lead to the end of long haul flights.

The airline will instead aim to compete with low cost airlines Ryanair and Easyjet and concentrate on short-haul flights to Europe.

The job losses amount to around a third of the airline’s workforce.

The airline has not yet officially announced the cuts, but sources told the BBC jobs would be lost.

Despite increased capacity the airline said passenger demand was flat.

It is retiring three Boeing 757s this Autumn and will have replaced its whole fleet in the next five years.

In July, it confirmed a £1.75bn order for 30 new Boeing 737 aircraft to be delivered by 2020. It is likely to mean a reduction in the size of its fleet from 42 to 30, although the airline does have an option with Boeing to buy a further 15 aircraft.

A statement released by Monarch on Monday said: “The company has previously stated that the new management team is conducting a strategic review of the group’s businesses, including in relation to their operations, ownership and financing.

“That review is on-going and further announcements will be made upon its conclusion or as otherwise appropriate.”

In an interview with Travel Weekly, Andrew Swaffield, who took over as Monarch chief executive in July, said:

He added he expected Monarch to be competing with Easyjet and Ryanair within the next year to 18 months. Mr Swaffield added it was “difficult” for Monarch to operate a long-haul business with only two aircraft.

Earlier in August, Monarch announced it will stop flying from East Midlands Airport next year.

It currently operates 34 flights a week from the airport to nine destinations, mainly in and around the Mediterranean.

A spokesman said the decision came after a review of services. The final Monarch flight will take place at the end of April 2015.

Analyst Howard Wheeldon said the change in strategy at Monarch would come “as little surprise” for many given the strength of competition, high costs and industry overcapacity.

He added many believed the “continuing rise in airport passenger duties….have and will continue to depress and further damage the UK airline industry”.

More about Monarch on Wikipedia at

On 3 November 2011, Monarch received a £75m rescue package for the airline. It was then announced that Monarch were to launch of 14 additional routes serving new destinations in Italy, Croatia and Greece from their bases. The new flights commenced at the start of the 2012 summer season. Monarch also received two Airbus A320 aircraft to support the increased level of activity. The addition of these aircraft also marks the first stage of a medium-term plan to increase the fleet size to 40 aircraft in support of the airline’s goal to carry 10 million passengers annually by the time the final stage has been fully implemented. Growing the fleet to enable an increase in passenger numbers will allow the airline to spread its fixed costs over a higher level of output, thus resulting in greater economies of scale.[55][56][57]

On 3 May 2012, Monarch announced that they were to open a new base at East Midlands Airport in Autumn 2012, to replace some routes previously flown by Bmibaby, who ceased operations completely on 9 September 2012.[58]

On 13 December 2012 Monarch announced that they have come on board as a new sponsor for Leeds United AFC, working in partnership with Leeds United to promote Monarch’s new base and routes at Leeds Bradford Airport.

On 1 July 2013, Monarch announced an order for a further two Airbus A321s. The aircraft are due to be delivered in April and May 2015 and are to be fitted with sharklets.[61]

On 12 December 2013, Monarch announced that Monarch Airlines had returned to profit in year ending October 2013 and announced that passenger numbers were up 9.5% to 7 million and in line to carry over 10 million by 2016. In the same announcement Monarch confirmed that it plans to order 60 new aircraft in an order worth $6 Billion for delivery up to 2024 and would announce the successful tender in Q1 of 2014 from either Airbus/Boeing and Bombardier.

On 14 August 2014, Monarch announced the closure of their East Midlands base.[62]