Aberdeen, Glasgow and Southampton airports sold to Ferrovial and Macquaire, by HAH, in £1bn deal

Aberdeen, Glasgow and Southampton airports have been sold by Heathrow Airport Holdings (HAH) in a £1 billion deal. All three will now be owned by a consortium formed by Spanish firm Ferrovial and Australia-based Macquarie, and managed locally.   The sale is expected to be completed in January 2015.  Ferrovial already part-owns Heathrow, and holds a 25% stake in HAH, which was previously known as BAA.  So from January 2015, HAH will only operate Heathrow, while some years back it owned and ran seven airports.  Heathrow itself is 25% owned by Ferrovial with other stakes controlled by investment vehicles from Qatar, Quebec, Singapore, the US, and China. (Nothing English).  By passenger number in the UK, Glasgow ranks 8th, Aberdeen 14th and Southampton 18th. The airports are not anticipating any particular changes due to the sale. The uncertainty over ownership has not been helpful for the airports, but the investors will be wanting a return on their billion pounds. 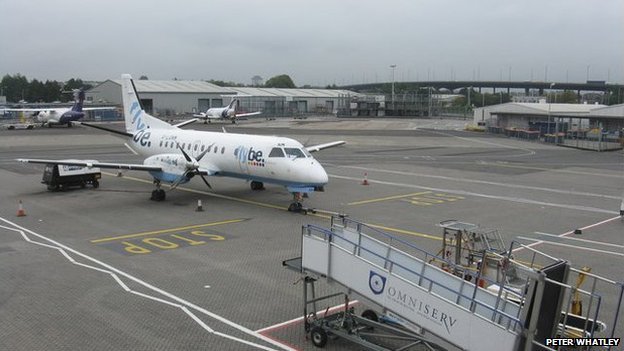 Aberdeen, Glasgow and Southampton airports have been sold by owners Heathrow Airport Holdings (HAH) in a £1bn deal.

The three airports will now be owned by a consortium formed by two companies – Spanish firm Ferrovial and Australia-based Macquarie.

The sale is expected to be completed in January of next year.

The three airports will be managed locally but supported by Ferrovial’s and Macquarie’s shared ownership.

Ferrovial already part-owns Heathrow, the UK’s busiest airport, and holds a 25% stake in HAH, which was previously known as BAA.

The deal means HAH will now operate only its flagship London hub.

The company had previously operated seven airports but an inquiry by the Competition Commission ordered it to be broken up.

By the time of the ruling it had already sold Gatwick, before later disposing of Edinburgh and announcing the sale of Stansted last year.

Heathrow itself is 25% owned by Ferrovial with other stakes controlled by investment vehicles from Qatar, Quebec, Singapore, the US, and China.

Heathrow chief executive John Holland-Kaye said: “This sale enables us to focus on improving Heathrow for passengers and winning support for Heathrow expansion.

“Heathrow is the UK’s only hub airport, connecting the whole of the UK to the world and bringing economic benefits locally and nationally.”

Edward Beckley, Macquarie’s European head, said the firm had a “long and successful track record of investing in and developing airports around the world”.

He added: “We look forward to working with these airports over the long term to support route growth and enhance the passenger experience for the communities they serve.”

Ferrovial chief executive Inigo Meiras said: “We are committed to improve these facilities and their services looking to a better passenger experience and in order to grant access to further domestic and international destinations.”

Amanda McMillan, managing director of Glasgow Airport, said: “Clearly this is a landmark day for Glasgow Airport and whilst we will be sorry to leave the Heathrow group, we do so knowing we’re in an extremely strong position.

“We have benefited from considerable investment in recent years and have achieved a great deal of success in securing new routes and growing passenger numbers. Together with my team, I am looking forward to working with Ferrovial and Macquarie to further develop our airport and ensure it continues to deliver for Glasgow and Scotland.”

Carol Benzie, managing director of Aberdeen Airport work on the deal had been taking place behind the scenes for several months.

She added: “Locally things remain very much business as usual. Our passenger numbers continue to grow, and we will continue to operate as we have been with a focus on the safety and security of our customers, as well as on delivering an excellent standard of customer service.

“No changes to the way we operate are planned and we will keep striving to deliver on all our commitments in the run up to a formal handover by the end of the year.”

The deal was welcomed by local authorities, with Glasgow City Council leader Gordon Matheson saying: “Glasgow Airport is of huge strategic importance for the city and the west of Scotland with over 5,000 jobs dependant on its continued success.

“Its success is vital to ensure that Glasgow and our city region continues to be an attractive location for investment and for local businesses to expand overseas.

“I’m encouraged to see that this deal is backed with a wealth of experience in both the air industry and public infrastructure – and my council will continue to work in close partnership with our airport to ensure it meets the needs of local business and leisure travellers.”

Mark Macmillan, the leader of neighbouring Renfrewshire Council, said the deal would give Glasgow Airport “security of ownership and more certainty for the future”.

Glasgow Chamber of Commerce chief executive Stuart Patrick said: “The existing management team has done an excellent job in promoting the airport’s assets and attracting in new flights over what have been rough times. There is still huge potential for growth and route development, and that has obviously influenced the attractiveness of Glasgow as an investment.”

The sale of Glasgow, Aberdeen and Southampton airports has been some time coming. Since the competition regulator took aim at the formerly nationalised British Airports Authority, later BAA plc, the break-up of that empire has looked likely.

Gatwick was sold five years ago for £1.5bn, and is now fighting hard to get the planning nod for a new runway, instead of letting Heathrow expand.

Either Edinburgh or Glasgow had to be sold, BAA was told, so the capital’s airport went to the same infrastructure investors who own Gatwick for a whopping £807m.

Renaming itself Heathrow Airport Holdings plc, the parent company then had to shed Stansted, going for £1.5bn to council-controlled Manchester Airport. And that left the three smaller parts of the company awaiting their fate.

The uncertainty over ownership has not been helpful for them. New owners may be willing to invest in upgrading Aberdeen’s facilities, while helping Glasgow compete more effectively with both Edinburgh, its new rival, as well as the beleaguered Prestwick. But then, those investors will also want a return on their billion pounds.

A joint venture between Ferrovial Aeropuertos of Spain and Australian investment bank Macquarie  is to buy Aberdeen, Glasgow and Southampton airports at a cost of $1.7bn.

The consortium will purchase the airports from Heathrow Airport Holdings (HAH), a company in which Ferrovial has a 25% stake.

Ferrovial bought HAH in 2006, at which time it was known as BAA and operated seven airports across Britain. Four of its facilities were sold off after a Competition Commission inquiry found that passengers were suffering as a result of BAA’s dominant position.

After the completion of this transaction, HAH will own only Heathrow airport, but the Spanish contractor will have increased its share of the UK airport sector.

Iñigo Meirás, the chief executive of Ferrovial, said: “We’re aware of the importance of these airports for the population in their surrounding areas. The transaction proves how valuable these assets are for Ferrovial.

“We’re committed to improving these facilities and their services looking to a better passenger experience and in order to grant access to further domestic and international destinations.”

He said the three airports would continue to be managed locally, but would have the additional support of Ferrovial and Macquarie.

Sir Peter Mason Chairman of Thames Water, will be appointed as chairman of the group on completion of the deal.

Macquarie’s half of the 50:50 joint venture is made up of its European Infrastructure Fund 4. Edward Beckley, the manager of the fund, said: “We look forward to working with these airports over the long term to support route growth and enhance the passenger experience for the communities they serve.”

Glasgow, Aberdeen and Southampton were repectively the eighth, 14th and 18th busiest airports in the UK in 2013.

The transaction is expected to completed no later than January next year.

http://www.globalconreview.com/news/ferrovial-buys-and-se2lls-thr5ee-uk-air4ports-17bn/
CIOB Website of the Chartered Institute of Building

Glasgow, Aberdeen & Southamptom Airports put up for sale by owners Heathrow Airport Holdings by end of 2014

Heathrow Airport Holdings want to complete the sale of the three airports by the end of the year. Key staff at Glasgow Airport were given the news at a briefing this afternoon. Spanish-owned BAA later issued a statement through Heathrow Airport Holdings Ltd. “Over recent months Heathrow Airport Holdings group shareholders and management have been considering their strategic position in relation to our three airports, Aberdeen, Glasgow and Southampton. As a result the group is now formally entering a sale process. Whilst there is currently no certainty that a sale will be concluded, the group intends to work towards completing a transaction by the end of the year.” BAA’s sold Edinburgh airport for £807 million in May 2012 to Global Infrastructure Partners. A Glasgow Airport source said: “The feeling here is that BAA need to raise cash to invest in Heathrow, but they are carrying too much debt.”
http://www.dailyrecord.co.uk/news/scottish-news/glasgow-aberdeen-airports-put-up-3944332