In its submission to the Airports Commission consultation (closes 3rd February) easyJet, which is the major airline using Gatwick, has backed a new runway at Heathrow – rather than at Gatwick.  EasyJet says a Heathrow runway would be in the best interests of passengers, as fares would be lower. Landing charges would have to rise substantially for a Gatwick runway, which does not suit easyJet or its low cost passengers. It makes on average £8 profit per passenger. Gatwick tetchily responded that easyJet’s response was just based on its own “narrow commercial interests” and that easyJet feared the extra competition a 2nd Gatwick runway would bring. (One might have thought they could dream up a slightly better retort).  easyJet said: “Heathrow is in the best interests of passengers as it has the greatest demand. It is clear that long-haul airlines want to expand at Heathrow and if they can’t, they will do so not at Gatwick but at other airports such as Paris, Amsterdam and Frankfurt.”  Easyjet also said: “We will respect the judgement of the Commission on [environmental] issues and our support for a runway at Heathrow is conditional on it meeting the relevant environmental conditions.”  EasyJet said it wanted to launch operations from Heathrow — although it would continue to use Gatwick – and a 3rd Heathrow runway would enable easyJet to base 30 aircraft there.
.
Tweet


For the actual text, see EasyJet’s response to the Airports Commission consultation.

Gatwick’s main airline is EasyJet with around 37% of passengers, and British Airways 2nd largest at around 14%.   BA also do not support a 2nd Gatwick runway. See below. 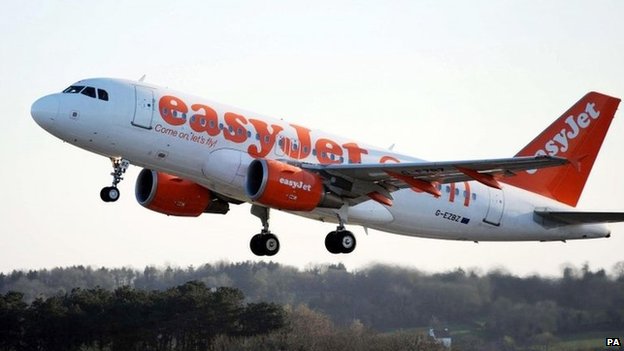 Easyjet said Heathrow expansion was in the “best interests” of passengers

Budget airline Easyjet has said it is in favour of expanding Heathrow airport.

In a submission to the Airports Commission, the airline said expanding Heathrow would provide greater passenger and economic benefits.

Easyjet has 11 bases in the UK with the biggest at Gatwick, which is bidding to build a second runway rather than expand Heathrow.

The company said Heathrow expansion was in the “best interests” of passengers.

In the submission, Easyjet argued expanding Gatwick would lead to a “significant increase” in airport charges and that would mean higher fares for passengers.

Chief executive Carolyn McCall said: “Heathrow is in the best interests of passengers as it has the greatest demand.

“By comparison, the Gatwick proposal requires a significant increase in airport charges.

“This would inevitably lead to higher fares for Gatwick’s passengers, the vast majority of whom are flying for leisure.”

A Heathrow spokesman said: “It is great news for Heathrow passengers and we look forward to working with Easyjet to deliver new routes and services.”

A spokesman for Gatwick Airport said Easyjet’s position was based on its own “narrow commercial interests”.

“The government however, will have to make a decision for the country balancing what is best for both the economy and the environment.

“Gatwick can deliver its second runway without the massive environmental damage which has stopped Heathrow expansion time and time again.”

A public consultation on the options ends on 3 February and the commission’s final report is due later this year.

Why would Easyjet, Gatwick’s biggest customer, want a new runway at Heathrow?

Easyjet says the bare fact is that most passengers want to fly out of Heathrow.

Adding a new runway, it argues, would allow a big low cost carrier, like Easyjet for example, to get a foothold in the country’s biggest airport. The extra competition, it claims, would force the likes of British Airways to cut their fares.

Another runway at Gatwick, it says, wouldn’t attract as many passengers or airlines, and that lack of competition would mean fares going up.

All this is hotly disputed by Gatwick as you can imagine. They reckon that expanding their airport will lead to more competition, not less, which would be good for customers.

So it’s a significant day. A big player in the runway row has shown their hand.

By setting up the Airports Commission, the coalition buried its splits over where to build a new runway. But the uneasy truce can only last so long.

The commission makes its recommendation straight after the general election. Whichever scheme it picks is bound to open up more divisions.

Comment from someone threatened with eviction from their home in the Heathrow Villages:

We are being told by the likes of Nigel Milton that Heathrow must expand for businessmen to fly more easily to China,India etc.  Now Easyjet come along to say that a third runway would increase the number of short-haul leisure trips.  As 70% of Heathrow’s passengers are already on leisure flights I suspect Easyjet are correct;  thousands of people will lose their homes and hundreds of thousands will suffer from more aircraft noise,night flights, increased air pollution and more traffic congestion – not to benefit British trade with Asia but for more people to have cheap flights to the Med.

… EasyJet …. has told the Airports Commission that the next new London runway should be built at Heathrow.

Like most other low-cost carriers, easyJet has never flown from Heathrow. The airport is Europe’s busiest, and with only two runways, congestion is a constant issue. No-frills airlines rely on fast turnarounds, with as little as 25 minutes before arrival and departure, which is difficult to achieve at Heathrow.

But in its submission to the Davies Commission, easyJet says that new capacity would create an opportunity for it to base 30 aircraft at Heathrow.

The airline has plans for operating as many as 200 flights a day to and from nearly 70 destinations, including seven UK cities. Four of these – Aberdeen, Belfast, Edinburgh and Glasgow – are already served by British Airways. Three airports on easyJet’s agenda – Inverness, the Isle of Man and Jersey – have lost links from Heathrow over the years, with slots deployed on more profitable services.

Carolyn McCall, easyJet’s chief executive, was scathing about Gatwick’s claims for the next runway. In the submission, she says: “There is no evidence that passenger demand at Gatwick, and therefore its range of airlines and their networks, will be significantly expanded with an additional runway. Gatwick slots have been and are still readily available now which would allow long-haul airlines to move to or expand at Gatwick. History shows that there is little appetite to do so and, in fact, many have left the airport.

“Heathrow is in the best interests of passengers as it has the greatest demand. It is clear that long-haul airlines want to expand at Heathrow and if they can’t, they will do so not at Gatwick but at other airports such as Paris, Amsterdam and Frankfurt.

“Fundamentally airlines, and indeed airports, respond to passenger demand; they can not force passengers to use airports they do not want to use.”

A spokesman for Gatwick said easyJet’s position was “based on its own narrow commercial interests”. [sic.  …. he means Gatwick’s are not ???]

“Heathrow is already the most expensive airport in Europe and expansion there can only drive up costs for airlines and passengers even further. This will deter low-cost carriers from operating at Heathrow in the future, just as it has for the past 25 years since the low-cost revolution got underway.”

Three low-cost airlines operate from Heathrow at present: Aer Lingus, which is subject to a bid by BA’s parent, IAG; Vueling, which is part of IAG; and the Lufthansa subsidiary Germanwings.

A Heathrow spokesperson said: “We look forward to working with easyJet to deliver new routes and services.”

This presumably comes as no great surprise to Gatwick, which has been conducting an ever more frenetic (desperate?) campaign for its runway. The airport has been in talks with easyJet for several years about the issue. From the sound of the tone of the Gatwick response, the talks have not been particularly good natured ….

Carolyn McCall, CEO of  EasyJet, the largest airline at Gatwick, has said passengers want expansion at Heathrow, not at Gatwick.  Ms McCall said easyJet is “quite concerned” at the prospect that Gatwick’s  landing charges would rise to pay for a 2nd runway.  They are having confidential talks with the airports on future charges.  EasyJet makes on average £8 profit per seat.  If Gatwick’s charges doubled from the current £9  to an average of £15 to £18 (or even up to £23) as predicted by the Airports Commission, this would hit EasyJet’s economics.  Ms McCAll said: “This whole issue of capacity should be about where the demand is. Airlines have to want to go into that airport, and the congestion we have is predominantly around the Heathrow hub. Passengers need to really value what this infrastructure brings, and if they don’t see any benefit it’s going to struggle.” A new runway risked emulating unpopular toll roads. “It will be years and years before [passengers] see any positive effect.”  As one of the UK’s largest and fastest growing airlines, EasyJet’s opinion will need to be given careful consideration by the Commission.

Willie Walsh, the head of IAG, will not support a 2nd Gatwick runway, even if it is chosen by the Airports Commission or backed by the next government. He does not believe there is a business case to support its expansion, and there is insufficient demand from airlines for extra capacity at Gatwick. Mr Walsh campaigned heavily for a 3rd Heathrow runway before 2010, but has made frequent comments indicating he does not believe UK politicians will have the “courage” to build that. Willie Walsh says British Airways would resist higher landing charges, which would be necessary to fund a runway – either at Heathrow or Gatwick. (EasyJet has also said in the past they don’t want a new runway, if it means substantially higher charges – their model is low cost). BA would want lower costs, not higher costs, from a new runway. IAG’s shares have now risen as it has now made a profit at last, and will be paying its first dividend (and maybe some UK tax). Gatwick’s main airline is EasyJet with around 37% of passengers, and British Airways 2nd largest at around 14%.

At the Transport Committee evidence session, Stewart Wingate, Gatwick chief executive, said he would oppose a 3rd runway at Heathrow and wanted to see Gatwick develop as a competing hub airport.  But BA’s Willie Walsh said airlines will only pay for expansion at one UK airport and that is Heathrow, implying he would oppose a 2nd Gatwick runway.  Willie Walsh also told the committee there was no business case to expand Gatwick, and he was not aware of any discussion with airlines about the extra amount they would have to pay for a new Gatwick runway.  Willie Walsh said “the only business case you could stand over is one to invest in a 3rd runway at Heathrow, but I’m not going to waste my time because it’s not going to happen.” Divide and rule ?