A second County Council has withdrawn its support for a 2nd Gatwick runway, because of the high level of local opposition – and the unconvincing case made by the airport.  West Sussex County Council (WSCC) voted by 37 to 26 to reverse its (somewhat unorthodox) decision in July 2013 to support another Gatwick runway.  It held today’s special meeting to debate the Gatwick issue, because the Council needed to write its response to the Airports Commission consultation, before it ends on 3rd February.  Kent County Council withdrew its backing for a second runway in November, because of new flight paths. Over almost 5 hours of debate, numerous WSCC councillors put their points, displaying a sincere intention to act in the best interests of the  county’s residents, as they saw them. Many expressed dissatisfaction with the Airports Commission’s documents and analysis, saying it was incomplete and often inaccurate. There was a high level of uncertainty about the inability of the county’s infrastructure to cope with the stresses of a new runway, with transport being of particular concern. Ultimately councillors felt there were likely to be huge costs and problems from a runway, with uncertain benefits. They voted against the runway. Gatwick said it was disappointed by WSCC’s decision. 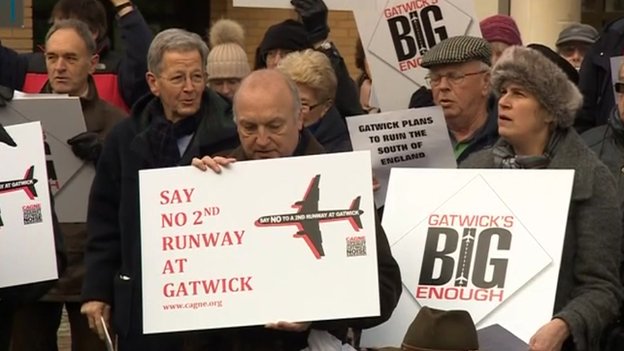 A second county council has withdrawn its support for another runway at Gatwick airport because of the high level of local opposition.

West Sussex County Council (WSCC) voted by 37 to 26 to reverse its decision in July 2013 to support expansion of the airport.

Kent County Council withdrew its backing for a second runway in November, because of new flight paths.

Gatwick said it was disappointed by WSCC’s decision.

The Airports Commission is considering three options for airport expansion in the South East – a second runway at Gatwick, a third runway at Heathrow or an extension to one of the existing Heathrow runways.

WSCC held a special meeting to consider its response to a public consultation that ends next month.

“The issue of a second runway at Gatwick is an extremely emotive subject,” said Councillor Pieter Montyn.

“Councillors believed that Gatwick has not, to date, put forward sufficient evidence to counter the very serious environmental and noise fears of local residents.

“However, irrespective of our position, our role now is to start planning for the future.

“The decision about the runway will be made by government so we have a responsibility and duty to plan for either scenario – second runway at Gatwick or not.”

The council’s official response is contained in 20 pages of improvements it believes should be made before any proposal to expand Gatwick is submitted to the government.

Gatwick said it believed expansion would bring a huge boost for the local economy, including thousands of jobs.

“We will continue to work closely with West Sussex County Council to illustrate the benefits that expansion will deliver,” it said.

“Gatwick is doing as much as possible to reduce the impact of aircraft noise on local residents.”

The Amendment that was voted on, by Mr Griffiths, was:

“The environmental damage is without question, whereas the economic benefit is unproven and may well be negative. Therefore this Council expresses its opposiiton to a new runway to expand Gatwick Airport”

This was an amendment to a longer original motion by Cllr  Bill Acraman.

West Sussex County Council voted against supporting a 2nd Gatwick runway – with 37 votes to 26 votes, with 4 abstentions. It also agreed its official response to the Airports Commission’s consultation expressing ‘serious concerns’ about the implications of a Gatwick 2nd runway. At a special Full Council meeting councillors almost unanimously approved the 20-page document which lists the improvements it believes need to be made before any proposal to expand the airport is submitted to Government. Leader of West Sussex County Council, Mrs Louise Goldsmith, and the Council’s cabinet member for highways and transport, Pieter Montyn, continue to back the runway. Mr Montyn said the council would not be including information on the vote in their submission to the Commission. Mrs Goldsmith was eager to assert that the Commission’s decision on a runway would not be influenced by her council – an opinion which many would disagree with. Mr Montyn said: “The issue of a 2nd runway at Gatwick is an extremely emotive subject and that played out at today’s meeting. [The Commission …] asks us to comment on the methodology and evidence base of [their] assessments, and to put forward improvements that we believe should be made.” Hence its position opposing Gatwick expansion will not form part of its consultation response. 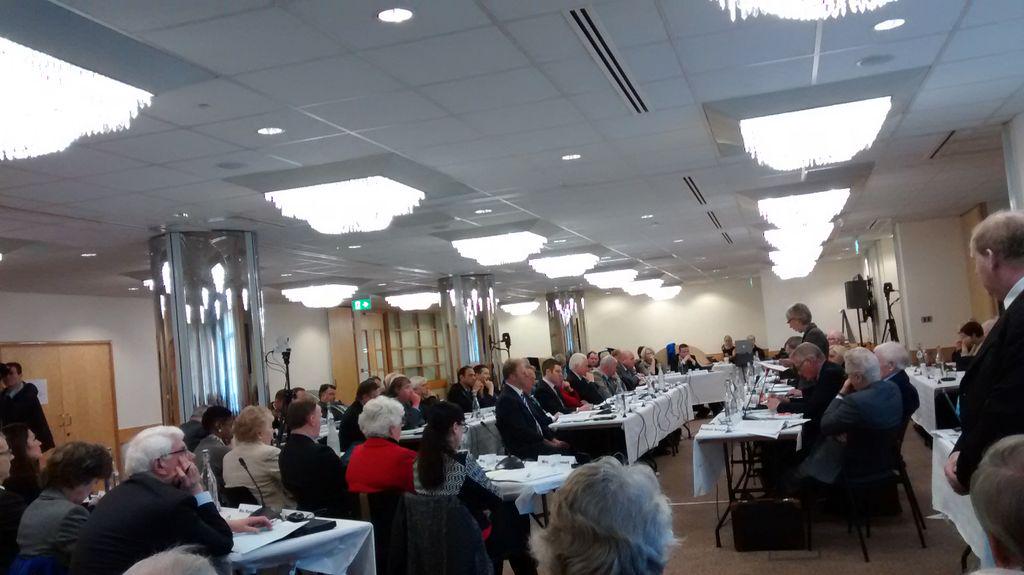 Video of the Gatwick song

There is a short video clip, with part of the Gatwick Runway song, at  http://www.chichester.co.uk/news/video-county-council-votes-to-oppose-second-runway-at-gatwick-airport-1-6530034

“What shall we do with Gatwick Airport?”  Response  “Tell them that the runway is a non-starter.”

“What shall we do with the noisy flight paths?” Response “Keep on protesting till they stop them.”

“What shall we do with Stewart Wingate?” Response: “Put him on a plane with a one way ticket .. all the way to China”

“What shall we do with Sir Howard Davies?” Response: “Pop him upstairs with a brand new title… if he says no runway”

“What shall we do with the County Council?” Response “”Tell ’em to repent, and we’ll forgive them”

And then ends on “Not in bed with Gatwick”.  [But they did repent!]

A Gatwick runway would affect people living on this area for decades to come. ie. Our children – at protest today 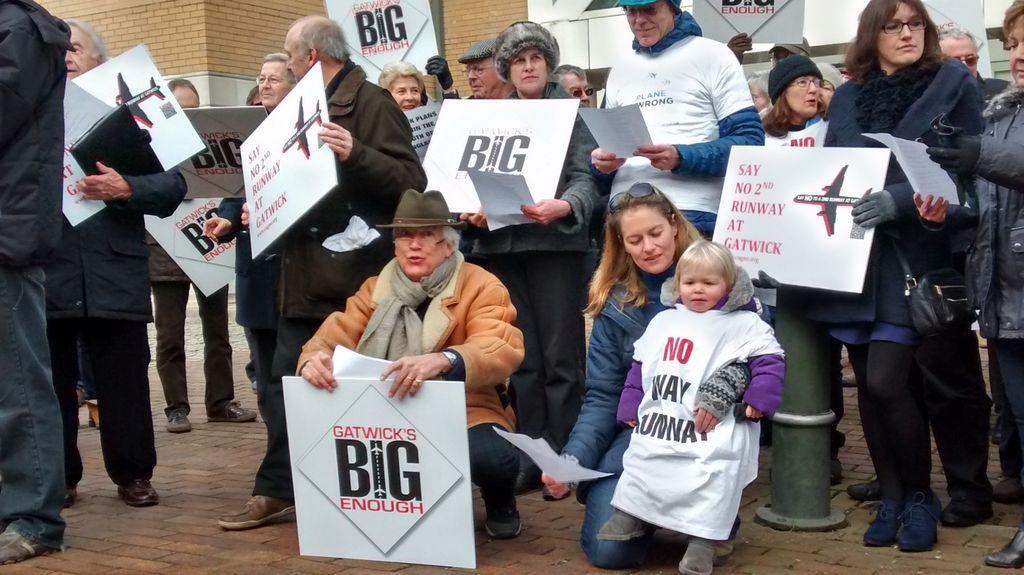 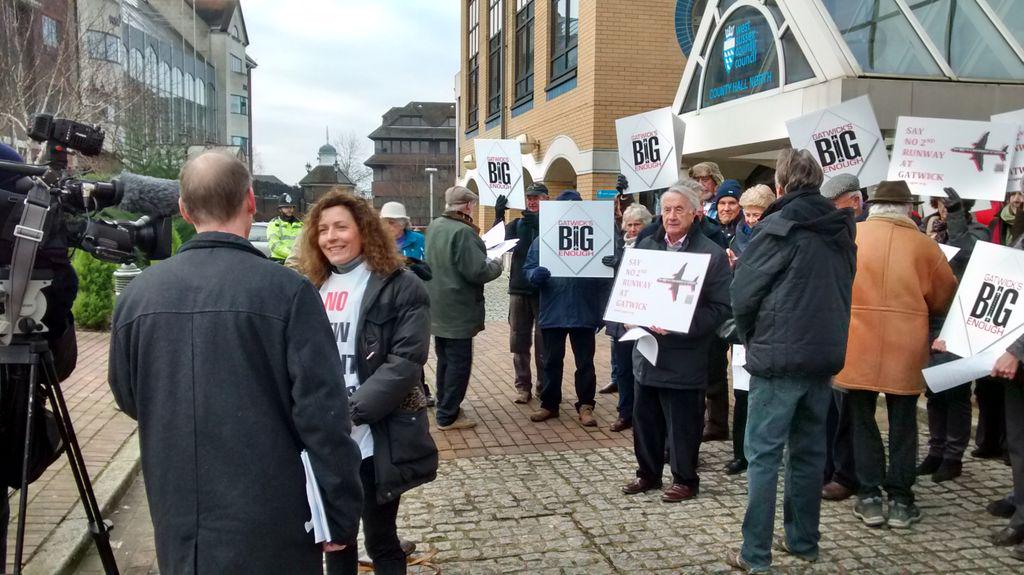 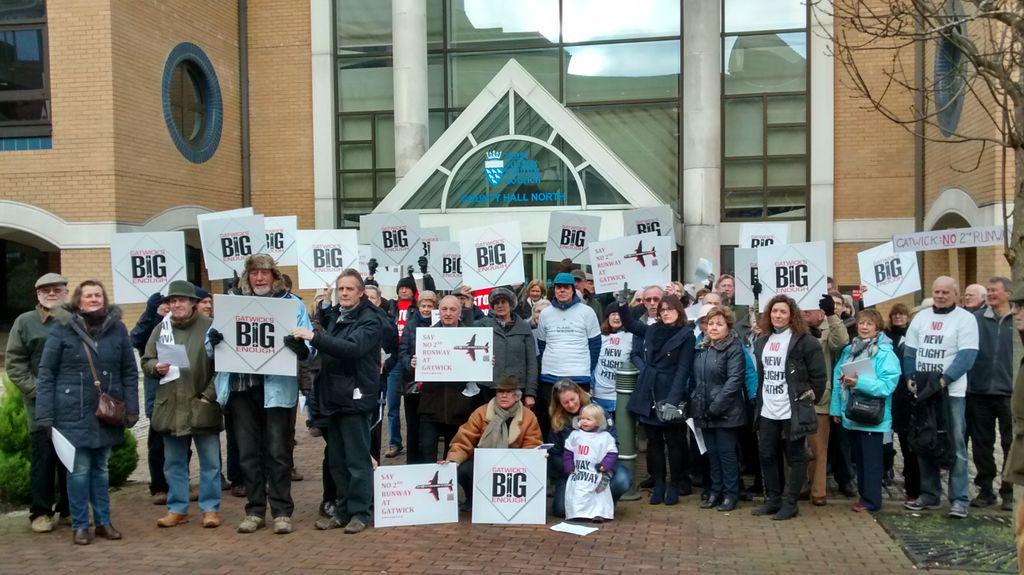 Below are some tweets during the debate, reflecting a few of the many points made:

Water will be a considerable challenge for Sussex etc if a 2nd runway was built. The area is already an area subject to serious water stress

Real issue that a new runway will mean huge extra costs for local authorities. But they are struggling with huge budget cuts now & for years

Cllr: “I want future generations of young people in West Sussex to be able to enjoy the same quality of life that I enjoyed as a child here”

Fears for young people in future that 2nd Gatwick runway would mean ever higher house prices in the area. Ever harder for them to buy a home

North south divide can only be exacerbated by a new SE runway. Data suggest every new SE job created means a job in the north is lost

Gatwick runway would mean loss of business & commercial space. There is already a shortage. Where will these alleged new businesses locate?

A few W Sussex cllrs seem to fear Gatwick might become some sort of half dead backwater without a 2nd runway. That is simply not happening!

Compared to. the extent of CO2 emissions & environmental damage done by a 2nd runway many other forms of growth & development would be more effective

Cllr at W Sussex says with the extent of errors, omissions & estimates of doubtful validity in the Gatwick case, the council cannot accept

Comment made that in George Orwell’s 1984 the name for the UK was “Airstrip One”. Supreme irony with the runway building nightmare now.

Many councillors at the W Sussex meeting have spoken well and articulately against Gatwick runway. Almost no effective comments in favour.

One councillor? Cllr Rae said whatever the temptations on economics he wanted to be rememered for having done the right thing on environment

Cllr Montyn at W Sussex says Airports Commission analysis has so many scenarios that they give no real usable, forecasts. Need improvements

Hearing how many W Sussex councillors have serious concerns about strains on infrastructure, it would be remarkable if council backed runway

W Sussex amendment for Council to neither support nor oppose Gatwick expansion. + another that asks for improvements in Commission analysis

GAL is offering to meet, discuss etc need for more infrastructure. But absolutely NO offers to actually pay for the massive costs involved

GAL realise its failure to deal with need for extensive new infrastructure if there was a 2nd runway. Say there is need for “further work”