NetworkRail has put plans for consultation, for a new rail tunnel, connecting the main line into London from the west with Heathrow Terminal 5.  The proposed link, subject to planning permission, includes a 3.1 mile (5km) tunnel from the Great Western Main Line at Langley to T5.  This could cut journey times between Reading and Heathrow and reduce road congestion, if passengers travelled by train instead of by car.  A series of public consultation events is to be held in Iver and Slough.  The rail plan was given the go-ahead by the government in 2012. There would need to be a new junction created between Langley and Iver stations. There are claims that the rail link would mean a quarter of people in the UK “within one interchange”  of Heathrow. The tunnel only travels under 2 houses so is not expected to cause too much disruption locally. The tunnel would go ahead regardless of whether there is a new runway, or not.  It is expected the tunnelling would take a year.  It has the potential to make journeys from the west faster and easier.  The timetable is for informal consultation now;  formal public  consultation in summer 2015; submission of application in early 2016; work starts spring / summer 2017; work completed and trains running by the end of 2021.
.
Tweet

The scheme is aimed at reducing journey times to Heathrow from the west. 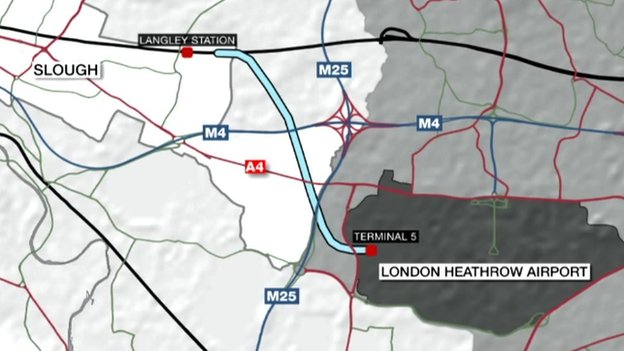 Plans for a new £500m rail link connecting the main line into London from the west with Heathrow Airport are going on public show.

Network Rail said it would cut journey times between Reading and Heathrow and reduce road congestion.

A series of public consultation events is to be held in Iver and Slough.

Given the go-ahead by the government in 2012, the plan would save up to 30 minutes for passengers travelling from south Wales, the west of England and the Thames Valley on the Great Western main line.

The line would turn off at a newly-created junction created between Langley and Iver stations and go through a tunnel to Heathrow Terminal 5.

The promises are huge: 42,000 new jobs, £800m a year of new investment and journey times into Heathrow from Reading and Swindon halved.

The 5km rail link would bring one in four people in the UK within one interchange of the airport.

The new tracks branching off the Great Western line east of Slough should attract little opposition: the tunnel would dive beneath just two houses on its way to the existing station beneath Heathrow’s Terminal Five.

And this project would go ahead regardless of what happens to the current debate about building a new runway.

The only surprise is that the link was not built years ago.

Tunnelling would take a year, with the first passengers boarding a train at the end of 2021.

Business leaders say foreign investors will be able to arrive at Heathrow and turn left to new jobs in the Thames Valley, instead of having to turn right into congested central London.

But perhaps taxi drivers in Reading will be less pleased – companies there currently spend £10m a year being driven to the airport.

Patrick Hallgate of Network Rail said: “We are keen to seek the views of local communities and passengers on our plans for a new link to Heathrow.

“It will open opportunities for thousands of businesses, enabling them to become more competitive and increasing economic growth.”

Ruth Bagley, chief executive of Slough Borough Council, said it would address the “poor connectivity” of Heathrow to the west.

“Whether it is the thousands of people who work at the airport, the businesses which rely on global connectivity to drive economic growth and create jobs, or other airport passengers, I’m confident that this will deliver a step change in the quality and reliability of journeys,” she said.

“It will also relieve congestion on the roads and bring significant environmental benefits, too.”

If the plans are approved, it is expected the new service would be in operation by 2021.

A new direct rail link connecting the west to Heathrow will improve passenger journeys to the UK’s busiest airport and help to increase economic productivity across the Thames Valley.

We are developing plans for a new rail tunnel leaving the Great Western main line between Langley and Iver to London Heathrow, allowing passengers to travel to the airport from Reading via Slough without going into Paddington station.

The investment will help to:

This direct rail link will allow passengers throughout the west to travel to the airport from Reading via Slough without having to change at Paddington station.

Proposed alignment for the tunnel.  Click on the image to download a larger version of the map

This will make journeys faster, improve access to Heathrow and provide significant economic benefits for the growing number of businesses in the Thames Valley region and beyond.

We’re planning to build a tunnel (comprised of two smaller tunnels) approximately 5km long, connecting with the Great Western main line at a new junction between Langley and Iver stations.

The new line would travel above ground for approximately 250 metres before entering the tunnel, which would connect to existing platforms at Heathrow Terminal 5. At its shallowest the tunnel could be approximately 10m below ground and at its deepest around 30m, with a diameter in the region of 6-7m.

The scheme is expected to take around four years to complete. Construction compounds will be necessary and once tunnelling work begins, working hours are expected to be a 24-hour operation.

Proposed location of construction compounds and haul roads.  Click on the image below to download a larger version of the map:

To build the tunnel, a significant amount of earth will need to be removed from the site. We’re currently exploring the best ways to do this by rail and road.

Throughout construction and once trains start running we will closely monitor any potential impact of the new tunnel on the surrounding area, making sure we put in place measures to protect any properties where necessary.

Further detail on the construction strategy and timescales will be available at the next phase of consultation.

During construction we may need to alter the local road network, particularly at Hollow Hill Lane where the new rail link will leave the existing railway. Station facilities such as car parking may also need to be reviewed to accommodate the potential increase in passenger numbers. We are currently talking to the local authorities about these matters.

There may be times when sections of the railway are closed to allow safe working. Where closures are required we’ll work with the train operators to keep passengers informed and where possible provide alternative means of transport. Further information on road and rail impacts will be available at the next phase of consultation.

At Network Rail, we work hard to reduce our impact on the environment and put rail at the heart of a low carbon economy. A full Environmental Impact Assessment (EIA) will be carried out before the plans are finalised.

Topics we will look at will include (amongst others):

We’re keen to hear from as many local residents and rail users as possible.

You can fill in our online feedback form by clicking below, or you can send us an email at: westernheathrowlink@networkrail.co.uk