MPs Paul Beresford, Crispin Blunt and Sam Gyimah, representing the people being overflown by the new departure routes from Gatwick have had a meeting with Mark Swan, the Director for Safety and Airspace Regulation for the CAA. They needed to discuss the CAA’s implementation of PR-NAV use of flight paths and its impact on local residents.  The CAA asked for the public to comment on the implementation (named PIR) and that ended on 5th January. People in south Reigate, Redhill and Holmwood have been badly affected by aircraft noise pollution, for the first time, as they are outside the NPR (Noise Preferential Route) which were adhered to in the past. The  CAA has the authority to require Gatwick to alter these flight paths following their PIR review. Mark Swan told the MPs that “We will not allow the status quo to be sustained”. The MPs want the routes to be returned as soon as possible to the pre-PRNAV pattern.  Mr Swan also stated that the CAA had sufficient authority to approve appropriate technical solutions that return paths towards the previous pattern. Gatwick Airport management have avoided attending meetings with angry and upset local residents, and have been slow to acknowledge there was a serious problems caused by flight paths. The MPs said: “We will sustain the pressure to try and deliver a summer less blighted than last year.”
.
Tweet

Today Sir Paul Beresford, Crispin Blunt and Sam Gyimah, the Members of Parliament representing the people being overflown by the new departure routes out of Gatwick, [these are RW26-CLN/BIG/LAM/DVR taking off to the west, and RW08-SAM/KENET taking off tot he east.  AW note] met Mark Swan, the Director for Safety and Airspace Regulation for the Civil Aviation Authority (CAA) to discuss the CAA’s review of the implementation (PIR) of PR-NAV (Precision Area Navigation) from Gatwick since November 2013 and the consequences of its full implementation from May 2014.

The CAA gave an update on the process, which was unprecedented in including a call for submissions from the public, which ended on 5th January 2015.They received 15,500 public representations which are now being analysed.

The CAA’s preliminary analysis was that there were “discrepancies beyond what was anticipated” on the two key routes which have led to a concentration of aircraft tracks, both westerly and easterly over south Reigate and Redhill and on westerly take-off over Holmwood. These tracks are outside the original Noise Preferential Routes (NPR) and have led to intense anger from constituents who now find themselves suffering constant aircraft noise pollution.

The CAA, as the regulator, have the authority to require Gatwick to alter these flight paths following their review. Mark Swan was able to assure the MPs, that on the basis of their work so far, “We will not allow the status quo to be sustained”.

The MPs were anxious that the critical path towards rectifying the routes should be as short as possible. They also made clear that the solution needed to return routes as close as possible to the pre-PRNAV pattern.

Mark Swan made clear that his officials would consider any new proposals from Gatwick Airport Limited (GAL) whilst they finished their formal review process. He also stated that the CAA had sufficient authority to approve appropriate technical solutions that return paths towards the previous pattern.

The MPs were accompanied by a BA pilot and local resident, Simon Lees, who is also advising Plane Wrong who are in discussion with GAL about technical solutions, having retained their own expert advisers, To70.

GAL, having not attended protest meetings last year, in contrast to the CAA, and having been slow to acknowledge there was a serious problem for local residents, have now undertaken to address the issue.

“We are grateful for the explicit assurances given us today by the CAA. The status quo is going to change and the CAA will assist GAL in delivering this relief as fast as possible. We welcome the fact that GAL are now engaged with Plane Wrong and their advisers and have put resources towards working out their own new proposals to the CAA. This will avoid the delay that would arise if GAL did nothing before the CAA completed their formal review process. It is now up to GAL to progress new proposals as fast as possible and the CAA have undertaken to help guide them so that safety and technical compliance issues can be resolved as fast as possible.

“All parties now appear to be working towards giving our constituents underneath the new concentrated flight paths the earliest possible relief from the unacceptable new noise nuisance imposed last year. We will sustain the pressure to try and deliver a summer less blighted than last year.”

Taking off towards the west:

Taking off towards the east:

Map from Gatwick airspace consultation at 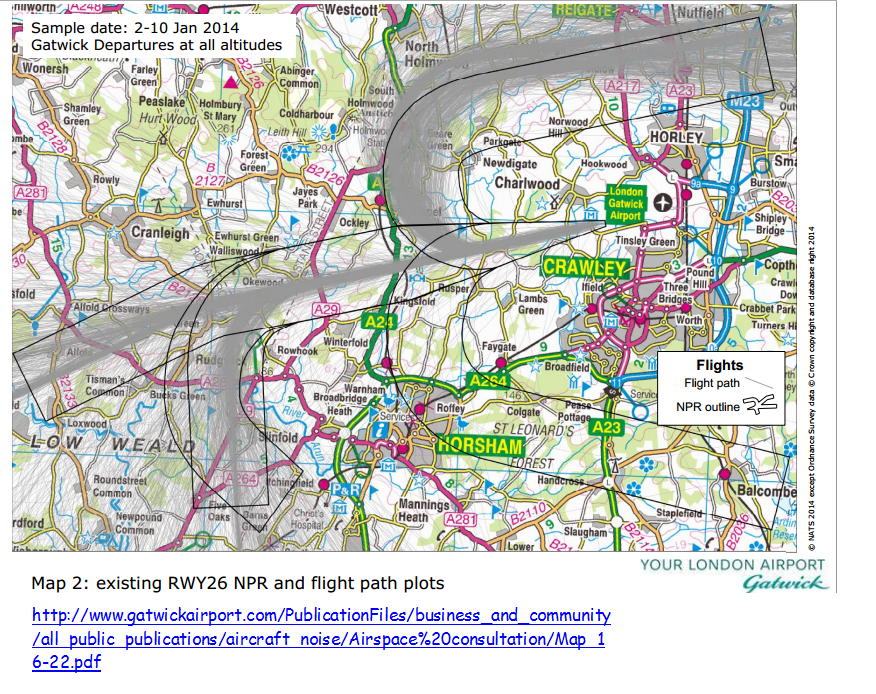 Comment from a resident affected by the increased aircraft noise:

Clearly a sign of progress, but we recognise that there is a long way to go still.

This comes in the same week as Tom Denton has claimed that the Surrey Mirror completely misunderstood him and mixed up arrivals comments with departures. The Mirror papers this week are carrying a story where Tom Denton says that he was misquoted and misunderstood and reaffirms that changes to our departure route are under consideration.

It is not yet clear to what extent this progress can be helpful to other problematic departure routes out of Gatwick. Both GAL and the CAA are saying that only 3 of the 9 routes are a problem and there are not significant complaints about the other 6.

We are sceptical about this. Presumably the three routes GAL consider to be the problems are the 2 north of the airport and the Slinfold route.

Gatwick has the SAM/KENET route and the SFD/BOGNA/HARDY route and SFD – the names are derived from Bognor Regis for BOGNA, Seaford for SFD,  Dover for DVR, Clacton for CLN, etc

That means Westerly departures on that route

That means Easterly departures on that route