Speaking in a live BBC Radio Berkshire debate, it was clear that none of the parliamentary candidates for Windsor support a 3rd Heathrow runway.  However, Labour’s candidate, Fiona Dent would not say whether she supported the runway, but did promise a consultation on it, if elected. Lib Dem George Fussey, Independent Wisdom Da Costa and UKIP’s Tarik Malik said they were opposed to expansion. The MP since 2010, Conservative Adam Afriye, won the seat with 60% of the vote at the last election, with the Lib Dems second with 11%. Mr Afriye said:  “For the last 10 years I’ve been absolutely clear – no third runway – and it’s not just about nimbyism… it’s not in the national interest, not in our regional interest and not in the interest of consumers….if Davies is sensible, he will recognise that Gatwick is the right option.” [Regrettable that he feels the need to pass the misery of increased noise etc, onto others, knowing how negative the impacts would be on his own constituents].  Mr da Costa said: “It shouldn’t be allowed to expand. The benefit to Windsor would be very, very small, economically but the disruption to Windsor, both environmentally and in terms of congestion and health, it will be phenomenal.” 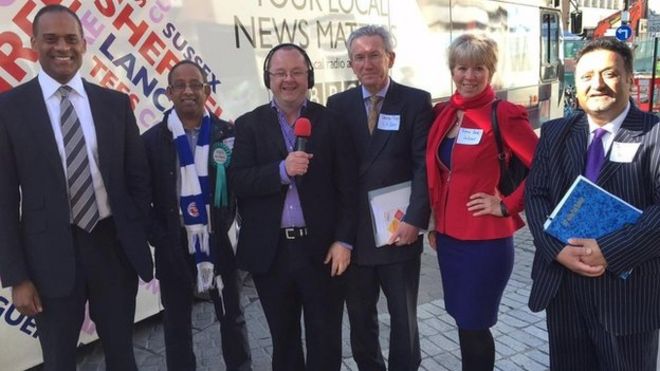 Heathrow Airport’s bid to build a third runway is not supported by any of Windsor’s parliamentary candidates.

Speaking in a live BBC Radio Berkshire debate, Labour’s Fiona Dent would not say whether she supported the expansion plans but did promise a consultation.

Conservative Adam Afriyie said he was optimistic the Davies Commission would chose Gatwick, not Heathrow.

The Airport Commission report by Sir Howard Davies, due after the General Election, has shortlisted three options for increasing air capacity in London – lengthening Heathrow’s existing runway, building a third runway or building a second runway at Gatwick.

“The jobs are important for the economy but they could be created somewhere else. We don’t think it’s sustainable, environmentally.”

Ms Dent said: “I’m concerned about the Davies Commission. It’s going to report just about a month after the election and the parameters of that commission have really only focussed on the economic impact. The social impact and the environmental impact have been largely ignored.

Mr Da Costa said: “It shouldn’t be allowed to expand. The benefit to Windsor would be very, very small, economically but the disruption to Windsor, both environmentally and in terms of congestion and health, it will be phenomenal.”

Mr Afriyie said: “For the last 10 years I’ve been absolutely clear – no third runway – and it’s not just about nimbyism… it’s not in the national interest, not in our regional interest and not in the interest of consumers.

“Our manifesto is quite clear – we are going to await the recommendations of the Davies Commission and then make a judgement.

“I’m optimistic, if Davies is sensible, he will recognise that Gatwick is the right option.”

Heathrow Airport says allowing the airport to expand would be a huge boost to the south east’s economy, bringing thousands of jobs to the region.

“A bigger Heathrow would lead to thousands more planes flying over Berkshire and the surrounding area, but new generations of quieter aircraft and more effective use of our runways would see noise levels in the area drop rather than rise,” said sustainability director Matt Gorman.

The airport said it had done all it can to argue its case and will wait and see what the Davies Commission recommends. The Airports Commission is due to report its findings after the General Election.

The candidates for the constituency are:

Expansion of Heathrow could ‘destroy Windsor’ according to councillor

Another Heathrow runway could ‘destroy Windsor’ according to a Windsor councillor and chairman of the Royal Borough’s Aviation Forum. The comments were made at a meeting of the forum,discussing the Airports Commission’s options for a new south east runway.  The councillor said:  “If the expansion of Heathrow Airport is given the go ahead, it will destroy Windsor and the reason why people want to come here. It will affect the ability to hold state functions at Windsor Castle and the north-western option will affect Eton….It would see an increased level of noise for our residents and will affect our world heritage sights, which the commission have seemed to overlook.” The Royal Borough of Windsor are now drafting a submission to the Airports Commission. Another councillor said:  “The Airports Commission’s paper is one of the biggest things the borough has had to respond to and the implications are enormous.” Another councillor commented that the need for up to 70,800 new homes, for a 3rd runway, would created turmoil and require highly valued green belt land.

A Windsor councillor has said that creating up to 70,800 homes if Heathrow expansion plans go ahead would cause “absolute turmoil.” He said a 3rd runway north-west of the airport could create the need to use greenbelt land for housing. However, almost unbelievably, a Heathrow spokesman said: “There will be little or no need for additional house-building over and above current local authority plans.” The Airports Commission, said Heathrow expansion would create between 47,400 and 112,400 jobs by 2030, which in turn would require an extra 29,800 to 70,800 homes to be created in the surrounding area, including Windsor, Slough and London boroughs. There will be a public meeting in Windsor to discuss the Heathrow plans, before the consultation ends on 3rd February. Windsor already has an enormous housing problem in the area, and are having go consider building on green belt land (which is locally very unpopular), even with no new runway. And there is increasing urbanisation …”The impact will be felt across the Thames Valley – it’s commercial greed gone mad.”

The Windsor constituency consists of:   ( Wikipedia )

2010–present: the constituency has the electoral wards:-