Thirteen members of Plane Stupid, who invaded part of Heathrow on 13th July as a protest about a possible 3rd runway, were charged with aggravated trespass and entering a security restricted area of an aerodrome.  At Uxbridge magistrates’ court on 19th August, they all pleaded not guilty to both charges. Dressed in polar bear costumes or wearing David Cameron masks, and carrying placards – they were surrounded by supporters and arrived to chants of “no ifs, no buts, no third runway!”   Many of the 40 or so supporters could not get into the public gallery. One of the accused, Sheila Menon, said people are already negatively impacted by Heathrow, and the UK already has enough runway capacity. An extra runway would largely cater for leisure travel by a minority. She believed the government was failing to act responsibly, and: “It is against this background and the failure of democratic processes, we believe our actions were reasonable, justifiable and necessary.”  The 13 were released on bail on the condition not to enter Heathrow or the area considered to be its perimeter. A trial date was set for 18th January. It is thought the case will last two weeks, with each defendant expecting to give evidence.
.
Tweet 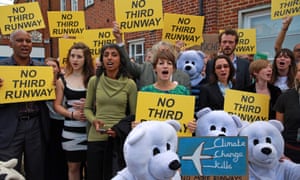 More photos at Demotix
Thirteen charged with aggravated trespass and entering a security restricted area of an aerodrome after runway demonstration in July. Supporters join the 13 Plane Stupid activists outside Uxbridge magistrates court

Thirteen members of the activist group Plane Stupid have pleaded not guilty to charges of aggregated trespass during a protest at Heathrow airport last month.

The seven men and six women are accused of cutting a hole in a fence and chaining themselves to railings on the north runway to protest against the airport’s expansion.

The demonstration at around 3.30am on 13 July – which caused delays for passengers around the world, with 22 flights out of the airport cancelled – coincided with the publication of a long-awaited report that recommended a new runway should be built at Heathrow rather than Gatwick.

After three years of investigation, the Airports Commission said Heathrow was best placed to provide “urgently required” capacity. But environmentalists warn that building a new runway there will make it harder to reduce air pollution and climate change emissions.

The activists are charged with aggravated trespass and entering a security restricted area of an aerodrome. All thirteen, supported by a packed public gallery at Uxbridge magistrates court, took turns to stand and plead not guilty to both charges.

On arriving at the court on Wednesday, the protesters stopped for a statement to be read on their behalf. Surrounded by supporters – dressed in polar bear costumes or wearing David Cameron masks, and carrying placards – the 13 arrived to chants of “no ifs, no buts, no third runway!”.

One of the accused, Sheila Menon, 43, read: “Some of us are part of the local community that is already feeling the hugely negative impact of existing air traffic from Heathrow by way of noise and air pollution, and blight on the area.”

She said the UK had more than enough capacity to deal with the “ordinary people” taking their annual holidays and that airport expansion was being driven by a “minority of wealthy frequent flyers”.

The government was failing to act responsibly, said Menon, adding: “It is against this background and the failure of democratic processes, we believe our actions were reasonable, justifiable and necessary.”

A number of the group’s supporters, a total of about 40 people, were unable to get into the courtroom owing to lack of space and stood outside for the morning, waiting for the hearing to finish.

One of them, who wished only to be named as Margo, said: “I am here to support the amazing, brave activists and to show my solidarity with them. If they get found guilty then it could be an incredibly terrifying sentence for them, because it is a big thing they are being accused of.”

The defendants were released on bail on the condition not to enter Heathrow or the area considered to be its perimeter. A trial date was set for 18 January. It is thought the case will last two weeks, with each defendant expecting to give evidence.

Thirteen climate change activists have pleaded not guilty to charges of trespassing on Heathrow’s north runway.

The Plane Stupid demonstration on 13 July led to delays and the cancellation of 22 flights.

The activists, who were protesting against plans to expand the airport, allegedly cut a hole in a fence and chained themselves to railings.

Supporters chanted “No ifs, no buts, no third runway!” outside the court.

Sheila Menon, one of the accused, read a statement outside Uxbridge Magistrates’ Court. She said the pollution and noise caused by air traffic at Heathrow was already blighting the area.

She said the proposed expansion – recommended by the Airports Commission in its final report last month – was driven by “wealthy frequent flyers” rather than ordinary holidaymakers.

The activists were charged with aggravated trespass and entering a restricted area of the airport without permission.

They were bailed on condition that they do not enter Heathrow or its perimeter, with a trial expected to begin on 18 January.

At around 3.30am a group of 12 climate change activists from the group Plane Stupid cut a hole in the perimeter fence at Heathrow, and set up a protest on the northern runway. They set up a tripod of metal poles, and metal fencing panels, and locked themselves onto these. Some were attached by D locks around their necks, onto the fence. Others used arm locks (two people link arms, handcuffed together, inside a hard tube) to make it difficult for police to remove them. Police arrived on the scene shortly after the protest was set up. The first flights arrive at Heathrow from around 4.30am. Flights were delayed while the airport needed to shift runways. Six protesters were removed quite quickly. The protest was due to the recommendation of the Airports Commission that a 3rd runway should be built at Heathrow. Besides the serious negative impacts of the runway on noise, air pollution, destruction of Harmondsworth, huge costs to the taxpayer and considerable social disruption for miles around, the issue which has been glossed over is the CO2 emissions that the runway would create from greatly increased flights, many long-haul. The Commission itself was aware that a new runway would mean the UK could not achieve its aviation carbon cap, and make it less likely the UK could meet its legally binding carbon target for 2050.