Heathrow never mentions imports, only exports – but imports larger by tonnage and by value than exports

Heathrow is very fond of saying how vital its air freight is to the UK economy. It is also always very keen to stress how important it is for the UK’s exports. Strangely, it never mentions imports (which are not so good for the UK economy). A detailed document by the DfT in 2009 set out the figures for UK air freight exports and imports.  Newer data is not readily available.  The 2007 figures (by HMRC) showed that the tonnage of UK exports by air freight was 414 thousand tonnes.  And the tonnage of imports was 1,663 tonnes. That means, in terms of just weight, the imports were 4 times larger.  The 2007 figures show that the value of UK exports by air freight was about £31.1 billion. And the value of imports was £51.1 billion. That means the value of UK air freight exports was only 61% of the value of UK imports. The CAA data for 2014 show the total air freight at Heathrow was 1,501,906 tonnes.  The 345,575 tonnes of exports was just 23% of the total weight of air cargo. The other 77% of air freight was imports. Heathrow says the value of its air freight in 2014 was £101 billion. But it says the value of its exports was £48 billion.  That is 47.5% of the total – a bit under half. Strange then that in any document put out by Heathrow, or any of its supporters, imports and their value are never mentioned. It was as if they barely existed. This is comparable to the way in which the benefits of inbound tourism are stressed repeatedly – but rarely the greater numbers of outbound Brits taking their holiday cash to spend abroad.  Odd, isn’t it?
.
Tweet


“New Customs and Excise data breaking down exports through the London airport give a revealing insight into the composition of the 345,575 tonnes of British goods worth more than £48bn that took off from Heathrow last year.”

Taken from a Telegraph article that just regurgitates a Heathrow press release, unquestioningly. No mention of imports at all.    11.11.2015  http://www.telegraph.co.uk/finance/newsbysector/transport/11986829/Flying-fish-why-fresh-salmon-are-a-crucial-cargo-for-Heathrow.html

That just proves how much smaller Heathrow air freight exports are than its imports. 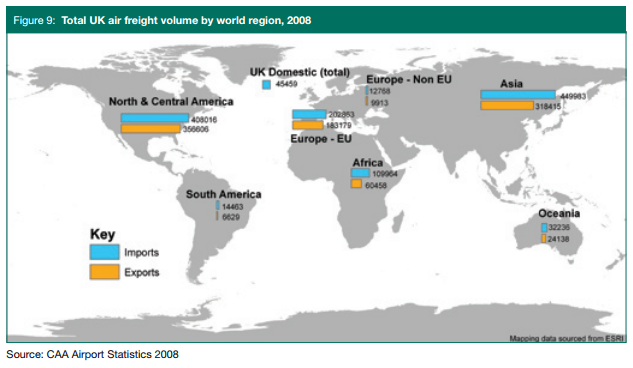 “The UK imports (57%) more air freight than it exports (43%) by weight. This adds up to over 1,280,000 tonnes of imports (1,230,000 tonnes excluding domestic air freight) and 960,000 tonnes of exports. The primary routes for air freight in and out of the UK are the transatlantic routes to and from the United States for both imports and exports, and also routes bringing imports from the major Asian economies.”  (Page 9).

Heathrow’s proportion of long haul, non-EU, air freight is 94% of the total by weight.

CAA data for air freight from Table 14  of the CAA data at  http://www.caa.co.uk/Data-and-analysis/UK-aviation-market/Airports/Datasets/UK-Airport-data/Airport-data-1990-onwards/ (only available as zip files)

East Midlands airport proportion of all UK EU air freight  is 15.9% by weight.

CAA figures for air freight for the UK in 2014

In fact, Heathrow carries more freight exports and imports by value than every other UK airport combined – with £101bn worth of goods passing through the airport in 2014.

Heathrow airport says: “Air freight accounts for 40 per cent of total UK imports and exports [by value] and most of it passes through Heathrow.”

The UK is the world’s tenth largest exporter of goods. If we want to open up new markets and take Britain’s freight farther, we need capacity for more long-haul routes to emerging economies.

33% of UK long-haul export goods by value travel through Heathrow. (That is goods travelling by air and by sea.)

The CAA figures show Heathrow deals with 94% of the UK total air freight by value, and around  65% of the volume of UK air freight travels via Heathrow.

Heathrow airport says: “Air freight accounts for 40 per cent of total UK imports and exports [by value] and most of it passes through Heathrow.” They also say in the same document that “33% of UK long-haul export goods by value travel through Heathrow.”

The top 5 exports by value through Heathrow are:

There is an interesting article about Heathrow and its air freight – and its EXPORTS.

But where in it, (or for that matter in any article put out by the airport or its supporters) of the IMPORTS that actually come through the airport in larger volumes than the exports.

IMPORTS are never mentioned in any of this public relations, advertising stuff.  (In the same way that INBOUND VISITORS to the UK are mentioned at length, but OUTBOUND BRITISH PEOPLE TAKING THEIR HOLIDAYS ABROAD are also ignored.

Very convenient. And presenting a very biased, and one sided view – which is what the industry wants.  ….

The value of UK exports shipped by air via Heathrow has increased 9.7% over a 12-month period as vaccines for medicine experienced almost 100% growth and Chinese demand for UK products continued to grow strongly.

New data has revealed over £7 billion worth of British exports travelled to China via Heathrow between August 2014 and July 2015, representing a 117% increase on the previous 12 months and over 15% of total UK export goods via Heathrow by value. [The data will have come from Heathrow itself].

The research has been shared by Heathrow to celebrate British Export Week this week. The airport claimed that the figures indicate that if Heathrow had unconstrained capacity, the value of Britain’s exports to China via the airport would overtake the US as the biggest destination within two years. Asian nations already make up four of the top five UK export destinations by value.  [And the value of the imports??]

Although vaccines for human medicine are the UK’s sixth most valuable export via Heathrow, they have risen by 97% and 87%, respectively, over the previous two years – partly as a result of recent world health crises.

As the biggest port in the UK by value of goods, Heathrow stressed it had played an important role in exports and recently announced a proposed blueprint plan to develop its cargo facilities and overhaul its processes and people and grow UK cargo volumes via a £180 million investment over 15 years. “This will support the UK government’s drive to hit £1 trillion worth of UK exports by 2020,” the company said. [What Heathrow was not saying was that its tonnage of air freight has barely increased for years.  It was only 1.76% higher in 2014 than in 2010.  Link ]

Other highlights of the research include: That over 345,000 tonnes of British produce was exported through Heathrow from August 2014 to September 2015. Precious metals (£26 billion) are the UK’s most valuable export travelling via Heathrow, followed by aircraft turbojets (£3.5 billion) and jewellery (£3 billion) – “demonstrating the UK’s reputation for quality manufacturing and engineering”.  [Again, no mention of how much was imported].

The value of Jewellery exported via Heathrow has increased 18% over the past two years, while paintings and drawings have also registered growth of 60% in the last year alone.

Fresh Salmon is the UK’s number one export by weight via Heathrow, with 46,000 tonnes exported in the most recent 12-month period, the same weight as 230 blue whales. Books and Brochures are the UK’s second-largest export by weight via Heathrow with over 20,000 tonnes exported in the 12 months leading up to July 2015; the equivalent to around 1,600 double-decker buses.  [Why do books and brochures need to be air freighted? They are not perishable. They are not specially high value. They could go by sea].

Overcoats and raincoats are one of the biggest growth exports by weight via Heathrow, with a 60% growth on 2014 figures, highlighting the continued growth of the British fashion and design sector. [Why do overcoats and raincoats need to be air freighted? They are not perishable. They are not specially high value. They could go by sea.  Yet another example of the highly environmentally damaging impacts of the fashion industry].

To further celebrate Export Week, Heathrow has partnered with UK Trade and Investment and its ‘Exporting is Great’ campaign to create a unique Export Café. The installation is on site at Heathrow Terminal 5 departures until Tuesday 17 November and showcases 25 of the UK’s best exports – including a tasting menu comprised of produce exported through Heathrow, showcasing the best of UK food and drink that Britain shares with the world.

Responding to the figures, the Freight Transport Association (FTA) repeated its calls for the UK government to make a decision regarding the expansion of the UK’s biggest airport. In July 2015, the long-awaited final report from the Davies Commission concluded that Heathrow was the best option for expansion because of the economic benefits for the whole country, which included £147 billion in economic growth over the next 60 years [they always omit that the Commission, using its untested and highly controversial – much criticised – economic model, which exaggerates benefits, said “up to £147 billion – other figures show a benefit over 60 years of just £1.4 billion.] and the creation of 70,000 new jobs by 2050. In response to the report’s findings FTA urged government to make a quick decision on airport expansion in the southeast of England, but as yet no announcement has been made.

In support of a third runway at Heathrow, and echoing FTA’s call for progress at the Airport, CBI president Paul Drechsler has said that “decisive action” is needed and that ministers should “get on” with it.

Chris Welsh – FTA Director of Global and European Policy said:  “FTA is once again calling on government to make a decision as quickly as possible regarding the expansion of Heathrow. Despite the clear recommendation made four months ago in the Davies Commission Report for a third runway, a government decision has yet to be made.

“It is clear that other business leaders recognise the urgency of expansion at the airport.  Air freight is essential to the future success of the UK economy, and additional capacity with a third runway is critical to allow importers and exporters to access new emerging markets in Asia, South America and the Indian sub-continent. Heathrow is a world-class air cargo hub, and it is vital that is it able to expand to meet the demands of UK importers and exporters to enhance connectivity to emerging overseas markets.”  [At last a mention of the importers!  But naturally, no figures.]

In 2014 FTA commissioned a report undertaken by York Aviation – focusing on the importance of air freight to the UK economy and airport capacity in the south east.  [York Aviation can always be relied up on to produce studies which show Heathrow expansion to be necessary. They have done many]. The findings of the report both confirmed Heathrow as a vital hub for air cargo and underlined that a failure to invest in new runway capacity would result in UK exporters and importers losing competitive edge to continental competitors with the real possibility of services transferring to airports on the continent.

Around 95% of air cargo is carried in the belly-hold of passenger aircraft; air freight accounts for nearly 40% of UK imports and exports by value and employs 39,000 people, most clustered around Heathrow – the UK’s main airport hub. It is critical for important sectors such as pharmaceuticals, high-end manufacturing and retailers, FTA said.