“Why we must thank the Heathrow 13” – Teddington Action Group blog

An excellent blog by TAG (the Teddington Action Group) says we all owe a debt of gratitude to the Heathrow 13. They say: No-one chains themselves to railings for want of something better to do.  No-one risks prison for the hell of it …. That this small group of people were willing to do so is testament both to their courage and to their fear … They had to take action, as this government simply does not have the political will to take unpopular decisions to face [the climate threat] head on …. What is left when the democratic process fails? ….Species are dying out; people are dying prematurely…. Yet the profiteers and the nay-sayers carry on their merry way. Heathrow is effectively saying [even with] another quarter of a million planes in the sky. “We’ll manage to stay within global warming limits.  Maybe.  Sort of.  It’ll be fine.  Trust us, dearie!” …. The Paris Agreement signatories agree to restrict global warming levels to ‘well below’ two degrees C…. This requires extensive CO2 mitigation measures which the UK Government seems to be sublimely unaware …. to even countenance more runways in any shape or form …. The Heathrow 13  (climate suffragists?) …. have our gratitude …. We cannot leave it to a few brave people to shoulder this burden for us.  It is everyone’s fight.


Why we must thank the Heathrow 13

Whether you avidly followed the news last week, examined every tweet, or whether you’ve never heard of them and don’t know what the fuss is about, we all owe a debt of gratitude to the Heathrow 13.

As John McDonnell Shadow Chancellor of the Exchequer said from the front lines of the Willesden Magistrates Court (respect to him for being there –  and to Sian Berry too –  the only London Mayoral candidate present), we stand by the Heathrow 13 because they stood by us. No-one chains themselves to railings for want of something better to do.  No-one risks prison for the hell of it.

That this small group of people were willing to do so is testament both to their courage and to their fear.

Courage in the face of the onslaught of accusations that were bound to follow on from their actions, fear that the climate is changing, that irreparable damage may already have been done and there is simply not the political will to take unpopular decisions to face this head on.

What is left when the democratic process fails? Much of the legislation regarding air quality is coming from Europe – now we are faced with the possibility of Brexit, people in the UK may no longer have that protection.

Species are dying out; people are dying prematurely.  Londoners breathe toxic air on a daily basis.  This is not speculation.  It is known science. Storms and floods beyond anything we have witnessed are becoming an annual hazard.

Yet the profiteers and the nay-sayers carry on their merry way.  Heathrow is effectively saying, yes our air quality levels are already illegal but we can still have a third runway,  put another quarter of a million planes in the sky. We’ll manage to stay within the two degree global warming limits.  Maybe.  Sort of.  It’ll be fine.  Trust us, dearie!

A few weeks ago signatories to the Paris Agreement agreed to restrict global warming levels to ‘well below’ two degrees C.  This ‘well below’ 2 degree target requires extensive CO2 mitigation measures which the UK Government seems to be sublimely unaware of –  must be unaware of if it can even countenance more runways in any shape or form.   More than this it has spent a great deal of public money on an Airports Commission to find sound business reasons why Heathrow should be chosen. Pick me! Pick me!

Interestingly, Professor Alice Bows-Larkin giving evidence at the trial of the Heathrow 13 notes that:

“The vast majority of academics working on climate change mitigation would agree that a rapid and significant reduction in the combustion of fossil fuels is needed in the coming decades…I am unaware of any analysis that can demonstrate how aviation could be an exception to this.”

The combination of growing demand and few technical options on the horizon that could dramatically reduce aircraft emissions means that the inability of the aviation industry to curb its environmental impact constitutes a public health risk, says Bows-Larkin.

Of the Heathrow 13 George Monbiot said in the Guardian a few weeks ago they are the heroes in the struggle against  political indifference to climate change.

There has even been talk of them being the climate suffragists.  They have our gratitude and now they have earned a break from being the thin blue line. We cannot leave it to a few brave people to shoulder this burden for us.  It is everyone’s fight.

Even those who are fortunate enough to live somewhere where A380s do not pass over their house at chimney pot height every two minutes.

The Heathrow ‘hooligans’ are our modern day freedom fighters 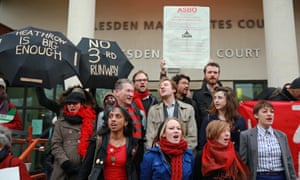 Supporters of the Heathrow runway protesters on trial for aggravated trespass and being in a restricted area of Heathrow airport without permission. Photograph: Mark Kerrison/Demotix/Corbis

They have been reviled as vandals, hooligans and lunatics. But to me, these people are heroes. The 13 women and men on trial this week for cutting through the perimeter fence around Heathrow airport and chaining themselves together on a runway were excoriated by police, passengers and politicians. (One of the defendants in the case is a member of the cooperative society that rents my house.) If convicted, they all face a possible prison sentence. But there are two trials here: the legal proceedings in a local magistrates court, and a test of something much bigger.

Aviation enjoys some astonishing exemptions from the civilising rules that constrain other sectors. Other industries must limit the noise they make; but aircraft, thanks to an obscure clause in the 1949 Civil Aviation Act, are exempt. Other industries pay duty on the fuel they use; but even when air passenger duty is subtracted, aviation’s various tax holidays amount to a subsidy of some £7bn a year, forgone by the Treasury. Some industries must limit the air pollution they produce; but while in principle airports are subject to pollution laws, in practice they have been allowed to breach them routinely for years. (In this case the legal immunity also seems to extend to motor traffic.)

Most importantly, international flights are free from all climate constraints. They are covered by neither domestic legislation nor international agreements. There are no targets, no timetables, no limits. Airlines operate in a legislative vacuum, a transnational, extralegal limbo, accountable nowhere and to no one. As a result they threaten everything that was agreed at December’s climate talks in Paris.

Aviation accounts for roughly 6% of the UK’s greenhouse gas emissions, and 2% of the carbon dioxide produced by people globally. But as this industry expands while emissions from other sectors are cut, a study commissioned by the European parliament expects it to produce 22% of the world’s CO2 emissions by 2050, unless there is a sharp change in policy. That’s enough to push us past the thresholds our governments promised to avoid.

At one point the draft Paris agreement contained a paragraph about aviation and shipping (another unregulated industry). By December this paragraph had disappeared, without public explanation or debate. The final agreement simply fails to mention either industry.

Governments left the issue instead to the UN’s International Civil Aviation Organisation, a body whose apparent purpose is not to make progress but to impede it. Dominated by the industry it is supposed to regulate, its work is an exercise in finely calibrated uselessness: it makes just enough noise to create the impression of something being done, without actually changing anything.

It has three main policies. The first is to offset the greenhouse gases planes release by encouraging other sectors to make bigger cuts, in lieu of those that aviation refuses to accept. It’s not just that this policy is likely to be unachievable, as the targets agreed for other sectors in Paris will be tough enough to reach. It is also unjust. Why should this sector, used mostly by the world’s richer people, be allowed to dump its responsibilities on the rest of the economy?

The second is replacing mineral jet fuel with biofuel. Already road fuels made from plants have helped to destroy the forests of Indonesia and west Africa, strip soil off the land, evict local farmers and spread starvation, as plantations of palm oil, maize, sugar cane and other crops grown to feed cars have replaced those grown to feed people. Already, governments envisage covering great tracts of the planet’s surface with energy crops to burn in power stations: a plan that’s as fanciful as it is destructive. Now they want to power planes this way as well? Will any corners of the planet be reserved for food production and wildlife?

The organisation’s third policy is promoting speculative and often unfeasible aviation technologies, that are highly unlikely to materialise. Perhaps we could call them mumbo-jumbo jets.

Because of the physical and technological constraints, the only way in which we can realistically reduce aviation’s greenhouse gases is to fly less. You might not have imagined, in the 21st century, that we would still need to hoist 180lb of human flesh 30,000 feet into the air every time we want a conversation. I’ve been limiting my own flights to one return ticket every three years. Yes, it has sometimes cost me opportunities and income, but this restraint has made me no less happy or fulfilled. If we can only challenge our sense of entitlement, I believe we inflict no damage on our lives by taking to the air less often.

But rather than seeking to manage demand, our government, like most others, aims only to meet its own inflated forecasts. It claims that the 219m passenger journeys through the UK’s airports in 2011 will rise to 445m by 2050, and it hopes to build enough capacity to accommodate them. In doing so, it vitiates every promise it has made about preventing climate breakdown.

Last month the government delayed its decision on a third runway at Heathrow, ostensibly because of concerns about local pollution (though the real reason was to avoid sabotaging the Conservative candidate’s campaign to become London mayor). But this represents no change in policy: Cameron intends to build the new capacity somewhere, even if it’s not in west London.

Each of aviation’s exemptions is a democratic deficit: a failure to hold the industry responsible for the harms it causes. So what are citizens to do, where the writ of government does not run? Sit back and watch? By doing so, we commit a disservice to democracy. A breach of the contract between state and citizens becomes normalised and ratified by our inaction.

Two verdicts will emerge from this trial. One will concern the legal status of what the protesters did, and there is no way of knowing what it will be.

The other will concern the moral status. I suspect that if they are locked up then history will pass the same verdict upon them as it has passed upon suffragettes, Chartists, the pioneers of trade unionism, and civil and gay rights activists. Vilified, prosecuted, but – in the court of public opinion – ultimately vindicated: this is what happens to the heroes of democracy.