The public consultation about the plan to build a 3.4 mile (5.5 km) tunnel from Langley (just east of Slough) ends on 4th April.  The plans by Network Rail are to for a tunnel to take train passengers directly to Heathrow Terminal 5, avoiding having to go via Paddington. This will mean Thames Valley and Welsh commuters can travel more directly to Heathrow.  Plans for the £500m rail tunnel have been on public display since 9th February. The scheme could take 5 years to build, with the tunnelling taking 15 months. There are the usual claims of huge economic benefits to the area.  Network Rail first proposed building the tunnel in 2012, and they hope it would mean journeys from Slough to the airport would be reduced to 7 minutes and journeys from Reading to 26 minutes. Currently, bus services are the most direct route to Heathrow. The tunnel would be part a range of upgrade measures on the Great Western Main Line – currently including the redevelopment of Reading Station – which links London, Bristol and South Wales. The building phase of the tunnel project would mean extensive site access – and presumably disruption – at a number of sites around Richings Park, Colnbrook and Poyle. Slough Council is openly backing a Heathrow runway, hoping to get considerable benefits from it.
.
Tweet

The tunnel from Langley to Heathrow will mean Thames Valley and Welsh commuters can travel directly to Heathrow, instead of having to connect to the Heathrow Express in Paddington

The last opportunity to feedback during this phase of public consultation will be Monday 4th April 2016. 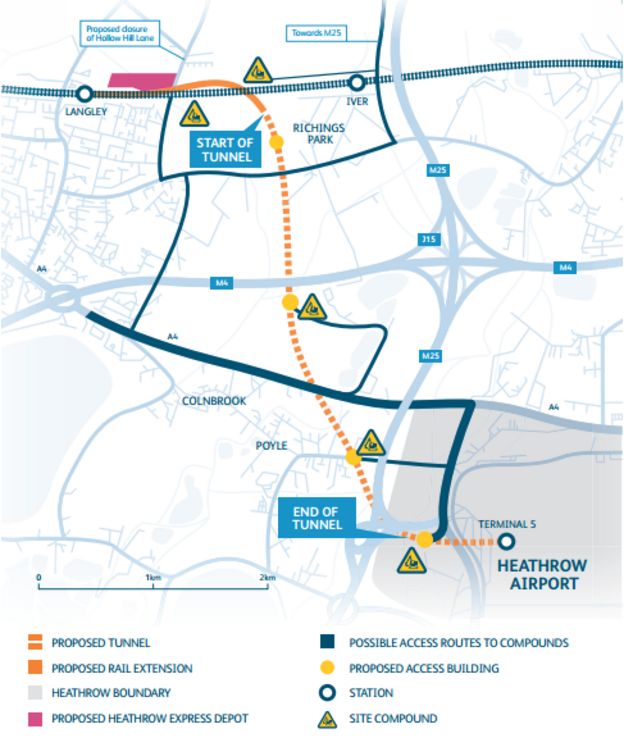 Plans to build a £500m rail tunnel from Slough to Heathrow airport have been on public display since February.

If it is approved, the tunnel project will take five years to build and is predicted to give an £800m economic boost to the local area. The tunnelling will take 15 months

Currently, passengers from the Thames Valley and Wales have to travel to London Paddington and get a connecting train to the airport.

The tunnel, which would start at Langley, will connect to Heathrow Terminal 5 and would mean that journeys from Slough to the airport would be reduced to seven minutes and journeys from Reading will take 26 minutes.

Currently, bus services are the most direct route to Heathrow.

The tunnel would be part a range of upgrade measures on the Great Western Main Line – currently including the £850m redevelopment of Reading Station – which links London, Bristol and South Wales.

Network Rail’s western route managing director Mark Langman, said: “The Great Western Main Line is undergoing the biggest modernisation programme since the Victorian era and so it’s really important that in developing our plans for the Heathrow link, we take this extensive improvement work into account.”

The public consultation, which runs until April, is asking businesses and residents to offer their views on the five-year project, which will require extensive site access at a number of sites around Richings Park, Colnbrook and Poyle.

Slough Borough Council’s Ruth Bagley, said: “It is vital that the millions of residents and businesses set to benefit from faster journeys to Heathrow have their say on these updated plans.”

Residents and businesses across the west, south west and Thames Valley are invited to have their say at a series of public consultation events on Network Rail’s updated plans for a new link connecting the rail network from the west to London Heathrow.

The proposed link, subject to planning permission, includes a 5km tunnel from the Great Western Main Line to Heathrow Terminal 5, enabling passengers throughout the west to travel to the airport from Reading, Twyford, Maidenhead and Slough, without the need to change at Paddington station.

This will mean faster, more convenient journeys for passengers, with travel times expected to be around 26 minutes from Reading and seven minutes from Slough.

Shorter, more direct journeys to and from London Heathrow will also provide a significant opportunity for businesses across the Thames Valley, M4 corridor, south west and South Wales, enabling these businesses to save time and money, increasing their productivity and helping to deliver economic growth in these regions.

Since the first round of public information events last year, the team has been working hard to progress the plans for the link using the feedback received. This has included carrying out ground investigation work and environmental surveys; refining the exact location for the tunnel and assessing different design options; and investigating the construction process and ways in which to reduce any impact on neighbouring communities.

As part of Network Rail’s Railway Upgrade Plan, extensive improvement work is currently taking place across the Great Western Main Line, including new tracks and signalling, and electrification in preparation for the arrival of a new fleet of longer, faster, quieter and greener electric trains. To ensure these upgrades inform the detailed plans for the new Heathrow link and to enable every community along the proposed route to comment on the proposal, the company will now submit the planning application for the scheme at the end of 2017.

Mark continued: “The Great Western Main Line is undergoing the biggest modernisation programme since the Victorian era and so it’s really important that in developing our plans for the Heathrow link, we take this extensive improvement work into account.

“Given how useful we found the feedback from the first round of events, we also want to ensure we capture the views of every stakeholder, business and community along the proposed route. This invaluable information will help put us in the best possible position to receive planning consent for the scheme.”

Ruth Bagley, chief executive of Slough Borough Council and Thames Valley Berkshire’s Local Enterprise Partnership lead on the project, said: “Significant progress has been made since the last public consultation – both with Sir Peter Hendy’s endorsement of a western rail link last December and the additional work Network Rail has been doing on the technical delivery of the project.

“It is vital that the millions of residents and businesses set to benefit from faster journeys to Heathrow have their say on these updated plans.

“As our highest strategic transport priority, we are working with Network Rail and other Local Enterprise Partnerships, particularly to the west of the airport, to ensure people know about the consultation and don’t miss the opportunity to comment.”

The second phase of the public consultation will take place between 23 February and 12 March, with a final submission date for feedback of 4 April. Details of each event are available on Network Rail’s website.

The proposed rail link will leave the Great Western Main Line at a new junction between Langley and Iver station and link in with existing railway platforms at Heathrow Terminal 5. It will provide the capacity for four trains per hour from Reading to Heathrow via Slough, with alternate services calling at Twyford and Maidenhead.

The benefits Network Rail claim for the scheme are:

The letter states: “We are writing to you as leaders of councils neighbouring the airport that support a third runway.

“After three years of expert analysis and at cost of £20m to the taxpayer, the independent Airports Commission made a unanimous and unequivocal recommendation to the government that Heathrow should be expanded.

“The commission looked closely at local environmental impacts and concluded that these could be adequately mitigated.

“Following several years of consultation and engagement with local people and local authorities, the plans that Heathrow are proposing are radically different to those rejected by the Prime Minister in 2010. The Prime Minister’s comments rejecting the original plans at that time are irrelevant to the current proposals.

“We are the leaders of councils representing tens of thousands of residents who live next to Heathrow, many of whom, as in other surrounding boroughs, are reliant on the proximity to the airport for work.

“We will continue to encourage the airport to do more to reduce its impacts but we support the skills, employment and community benefits that Heathrow expansion would bring to our boroughs.”

The Royal Borough of Windsor and Maidenhead has written to David Cameron to warn him to ‘expect court action’ if a third runway at Heathrow is not ruled out. Click here to read the full story.