Gatwick groups and MPs hand in new report to Downing Street: “What about our air quality?”

Community groups and MPs have delivered a copy of a new report, “What about our air quality?” to 10 Downing Street. The report raises the fact that an expanded Gatwick could present worst air quality for a much wider area than Heathrow currently – due to the lack of sufficient transport infrastructure. Air quality targets close to Gatwick Airport have been broken despite the airport’s public denial. Data from Jacobs, for the Airports Commission, show breaches of NO2 levels already. It is inevitable they will be broken again, especially with a 2nd runway, because the rail infrastructure is already inadequate, and more passengers (and possibly freight in future) will mean additional road vehicles. The report contains a letter from 10 MPs who wrote to the Secretary for State for Transport, Patrick McLoughlin on 18th March, demanding that Gatwick’s misleading advertising over air quality be stopped. Gatwick has often said words to the effect that  “Gatwick Airport has never and will never breach air quality limits” and instead its expansion campaign has been focused on the air pollution problems at Heathrow, ignoring their own. Gatwick is served by a rail line that is already near capacity, and it cannot be much improved due to physical restrictions. It could not handle not only more passengers, but also extra staff and traffic from more businesses.
.
Tweet


Gatwick groups and MPs hand in new report to  Downing Street:  “What about our air quality?”

The report “What about our air quality?”

Community groups and MPs have delivered a copy of a new report, “What about our air quality?” to 10 Downing Street. 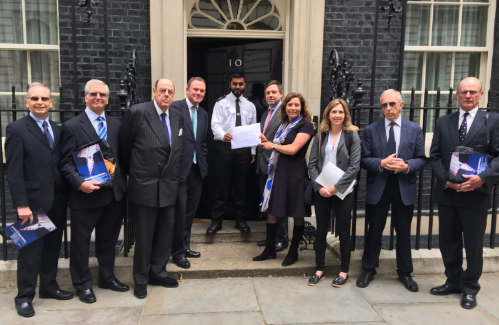 The report raises the fact that an expanded Gatwick could present worst air quality for a much wider area than Heathrow currently – due to the lack of sufficient transport infrastructure.

Air quality targets close to Gatwick Airport have been broken despite the airport’s public denial.

It is inevitable that this will happen again.   Why?

The report contains a letter from 10 MPs who wrote to the Secretary for State for Transport, Patrick McLoughlin on 18th March, demanding that Gatwick’s misleading advertising over air quality be stopped.  [Data from Jacobs Page 9  Link  show where the NO2 levels are already too high]

However the new air quality report reveals how Gatwick can’t hide the facts – Gatwick Airport is positioned on one of the worst railway lines in the country and it can’t be expanded due to physical restrictions. Passengers will be travelling to and from the airport largely by road.

Gatwick hopes to double its tonnage of air freight, if it gets a 2nd runway. This would result more road trips by cargo vehicles, and the cargo would not arrive by rail.

Gatwick only has one major access road, the M23, that will be full before Gatwick’s 2nd runway is finished. The other feeder roads  ‘B”, “A’ roads or country lanes are also filling up.

Gatwick Airport has no alternative but to force passengers and workers, as well as supporting airport vehicles, on to these roads.  Gatwick say no Government funding is required for extra road infrastructure. Gatwick suggests that it will now stagger development of the airport and so will not immediately fund the new link road to access Gatwick, with a 2nd runway, from the M23  – which was promised to reduce emissions.

“Infrastructure in our area is already facing severe challenges.  An extra runway at Gatwick would place an impossible strain on public transport, which was never designed to accommodate an airport, which would be busier than Heathrow.   Public Transport is incapable of coping with all the extra employees that would need to commute in long distances, let alone the extra passengers. This in turn would result in a huge increase in car traffic with all that that implies.”

“My constituency of Mid Sussex is already under the greatest pressure to meet its own existing housing needs today, even without Gatwick expansion.  This is also the case with Crawley, Horsham, Brighton, Lewes and Adur all of whom share many of the same problems.  The Airports Commission detailed that a town the size of Reigate, some 18,400 new homes, would be required for Gatwick expansion.  With an already substandard and inefficient highway network and railway lines that are physically restricted and constantly broken, it is relevant to enquire how are the 95m passengers and workers meant to access Gatwick and London?  This will represent huge infrastructure challenges as well as serious air quality concerns for our many towns and villages since growth in the region is way beyond the current infrastructure capacity and yet we are expected to accommodate an airport bigger than Heathrow with no Government funding.”

As a local GP of some 30 years, Dr Paul Stillman details the concerns that are already present in the neighbouring town of Crawley, “A major clinical problem throughout that time has been the high levels of respiratory disorders, including asthma in children and young adults. Stress related illnesses, including high blood pressure with all its consequences, have also been apparent in this community more than elsewhere. I do not believe this is related to social deprivation or employment issues, simply because we don’t have them. It is however certainly in part the result of poor air quality from both aero fuels and road vehicles, and traffic congestion with the loss of open spaces for us to enjoy.”

Sally Pavey, Chair of CAGNE, Communities Against Gatwick Noise and Emissions, which presented the report to  Downing Street, said:  “We are fed up of being ignored and dismissed by Gatwick management and have produced documents that detail exactly why Gatwick should not be expanded. We also have an ad van going around London today, informing people of the truth about Gatwick expansion.”

Handing in the report for the Prime Minister’s office, GACC (Gatwick Area Conservation Campaign) enclosed the booklet “Gatwick Grounded: Why a second runway will never fly.”

The arguments in this document have now been amplified in several important research studies published by GACC (with more to come).  The list of the GACC studies and links to them are below.

Those handing in the report to Number 10 Downing Street on Monday 16th May were four members of the Gatwick Coordination Group of MPs – Sir Nicholas Soames MP for Mid Sussex, Jeremy Quin MP for Horsham, Tom Tugendhat MP for Tonbridge, Edenbridge and Malling, and Nick Herbert MP for Arundel and South Downs.

Community groups include Derek Meakings from One’s Enough, a Crawley based group; Doug Cox of GACC, a conservation group that has been established since 1968 presenting all areas that surround Gatwick; Kia Trainor of CPRE Sussex (Campaign to Protect Rural England), and Sally Pavey Chair of CAGNE, a West Sussex and Surrey group that seeks a fair and equitable distribution of the currently level of flights in and out of Gatwick and are vehemently opposed to Gatwick expansion joined by CAGNE committee members Bill Sorrell and Gareth Hayton.

The report:  “What about our air quality?”

Representing residents of West Sussex and parts of Surrey cagnegatwick@gmail.com 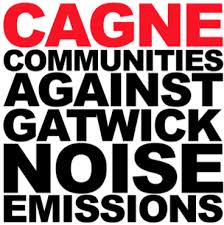 Ø  Gatwick’s expansion case relies on additional seat capacity brought about by £2bn in improvements scheduled for the overcrowded and un-reliable Brighton Mainline before 2019, to support new airline passengers. But those improvements were designed to address current issues, and not intended to absorb the trebling of airport passenger numbers that could come from an expanded Gatwick. (p.73, ‘A Second Runway for Gatwick’, Appendix 6 – Surface Access).

Ø  That means additional passengers brought about by the expansion at Gatwick would consume all of the additional seats from the £2bn improvements, whilst Gatwick won’t contribute a penny.

Ø  Meanwhile, every day commuters will be left standing and fairs will have to increase as since 2000 the number of passengers has increased three times the number of Gatwick travellers.

Ø  After 2019, no further rail improvement programmes have been confirmed by network rail even though additional rail improvements would be needed in the future to accommodate background growth, even without expansion.

Ø  Network Rail has identified possible future work to address this background growth, but Gatwick argues it would help support new airport passengers, if indeed the programmes go ahead at all.

Ø  If the work goes ahead – and expansion wouldn’t be feasible without it – the public subsidy to improve Gatwick’s rail links with expansion would rise to £4billion, £2billion of which is currently unfunded.

Ø  If the work doesn’t go ahead, then up to 40% of passengers would be standing before they reach Gatwick from the south, and 80% plus will be standing to London Bridge.

Ø  Gatwick is surrounded by a failing network of roads with pollution monitors already in place.  New roads would be needed for Crawley, East Grinstead and a Croydon underpass or major road expansion, as this is the heavily congested direct route from Gatwick to London.

Ø  The only access road to Gatwick is the M23 that will be full before Gatwick is finished and leads to a congested four lane M25.

Information from Jacobs, for the Airports Commission, showing areas near Gatwick where NO2 levelsl are above the 40 µg/m 3  legal limit 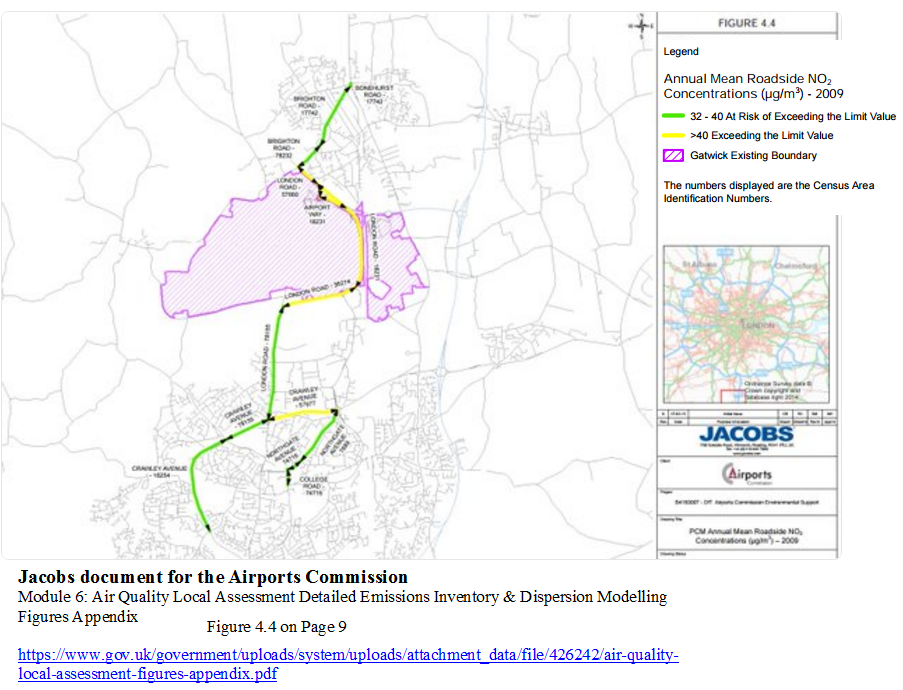 Larger image on Page 9 of  link

Gatwick is misleading local residents about the environmental impact of their plans to build a 2nd runway, a group of South East MPs warned today. The MPs expressed their concerns about air quality claims and night flights in a letter to the Transport Secretary,Patrick McLoughlin. The Gatwick Coordination Group (GCG) – the MPs in areas close to and affected by Gatwick – is asking Mr Mcloughlin to stop Gatwick from running advertising campaigns which contradict expert environmental evidence, and mislead their constituents. Gatwick has repeatedly claimed the area around the airport “has never and will never breach legal air quality limits” and that it is the “greener” option for expansion. But the MPs as well as councillors and local representatives say the airport’s claims ignore significant evidence in the Airports Commission’s report. The GCG are demanding Gatwick makes clear the real impact of a 2nd runway on the local environment to nearby residents. The GCG also object to the DfT “drawing up plans for night flights at an expanded Gatwick, which would subject over 60,000 people in the Gatwick area to over 20 hours of continuous aircraft noise. It is incredible to think that the DfT is contemplating this when the Airports Commission made a stronger case for Heathrow which included a clear and viable recommendation for a ban on night flights”.