Gatwick has made its last ditch attempt to persuade the government to let it have another runway. It is thought likely that some runway decision will now be made by early September at the latest, if it is not made before about 18th July.  Gatwick Chairman Sir Roy McNulty has written to David Cameron, hoping to persuade him that Gatwick will  not cost the air passenger any more than £15 per flight.  Gatwick claims they can manage the noise levels,  though are not entirely clear how. They hope sharing out the noise over more people will keep the numbers within the 57 dB and the 55 Lden to manageable levels. They hope to get the runway started before the next election, thereby not having given the electorate the change to vote on the matter – as the Airports Commission announcement  in July 2015 was deliberately after the last election in May 2015. They claim there will be no cost to the taxpayer, but there are estimates of possibly £12 billion by TfL for the necessary transport work to deal with another 40 million passengers.  Gatwick hopes its paltry £46.5 million offer will cover all that.  And Gatwick claims it will never have an air pollution problem – rather ignoring the pollution caused by the inevitable traffic, as there is inadequate public transport.  Looked at in detail, the offers (like those of Heathrow a few weeks earlier) are very threadbare  indeed.    AirportWatch comments, and links to evidence, on the letter copied below.
.
Tweet

West Sussex airport makes eight pledges to bolster its case over Heathrow’s as pressure mounts on PM to make a decision
By Rowena Mason, Political correspondent
7.6.2016 ( Guardian)
Gatwick has mounted a fresh lobbying drive to secure a third runway instead of Heathrow, sending an open letter David Cameron in which it promises to speed up its timetable and cap passenger charges.
The airport set out eight pledges designed to sway the prime minister as he faces a tricky political decision soon after the EU referendum.
With pressure for him to settle the matter within weeks, both Gatwick and Heathrow have begun to step up their efforts to convince politicians and the public of their case.
Howard Davies’ airport commission recommended a third runway be built at Heathrow, but Cameron eventually delayed the decision until this summer.
Despite promising a decision in 2015, the government said it needed more time to examine the environmental case. In reality, however, the new timetable prevented a clash between Downing Street and the Tories’ London mayoral candidate Zac Goldsmith.
With officials, business and infrastructure experts urging him to make up his mind, Cameron and his cabinet will likely have to make a decision over the summer, depending on whether the government is ousted or in turmoil in the aftermath of the EU vote.
Gatwick’s letter commits to capping the number of people affected by aircraft noise at much lower levels than Heathrow, [how on earth could it fail to do that, bearing mind that more people live around Heathrow in the suburbs?] keeping passenger charges at a maximum of £15 [that is £15 inflation- linked, and if there is some as yet unspecified agreement with the government] and no requirements for taxpayer subsidy [that may be true for the runway and terminal, but the extra costs of all the infrastructure including road improvements, rail improvements, social facilities, hospitals, schools etc will not be paid by Gatwick at all].
Stewart Wingate, the airport’s chief executive, said choosing Gatwick would solve a political conundrum for the prime minister and end up “securing his legacy”. [Meaning an appeal to personal vanity – actually, whose legacy?]
“He would be able to break ground on a new runway before the next general election, and whoever is prime minister after him would be able to open the new runway before the following election in 2025,” he said.
Choosing Gatwick would mean Cameron did not have to go back on the “no ifs, not buts” pledge he made in 2009 not to allow a third runway at Heathrow. He might also find it easier to get through parliament, given the number of senior Tory MPs in marginal seats who oppose Heathrow expansion. London’s mayor, Sadiq Khan, is also against a third runway at Heathrow.
There have been reports, however, that Heathrow is now considered to have overcome the environmental hurdles that were holding back a decision in its favour late last year, and many in the government are convinced of the economic case for a hub airport. [Heathrow has not been able to meet the requirements. It has not control of much of the extra traffic, and therefore the NO2 pollution; it cannot add 50% more planes over increasingly densely populated areas without increasing noise; and it has only made very implausible and carefully worded offers on limiting night flights, which are less generous than they would appear at first sight. Link ].
Heathrow has already agreed to curb night flights [but actually very little better indeed than now  Link ] if permission is granted for a third runway, and has announced measures it says meet all the conditions set by the airports commission for its expansion plan.
As well as banning all arrivals and departures before 5.30am, the west London airport has said it would support the introduction of an independent noise authority, and pledged not to add new capacity unless it can do so without delaying UK compliance with EU air quality limits.
It also revealed that it would accept any government decision to rule out building a fourth runway in the future.
Those with knowledge of the decision believe it will ultimately be a choice for the prime minister himself, but in theory it will be agreed by an airport subcommittee made up of Cameron; the chancellor, George Osborne; the transport secretary, Patrick McLoughlin; the environment secretary, Liz Truss; the chancellor of the duchy of Lancaster, Oliver Letwin; the communities secretary, Greg Clark; and the chief whip, Mark Harper.
The whole cabinet, including members such as Justine Greening, Theresa May, Greg Hands and Philip Hammond, whose constituencies are affected by Heathrow flight paths , are also meant to agree the choice.
https://www.theguardian.com/uk-news/2016/jun/07/gatwick-lobbies-david-cameron-with-open-letter-on-third-runway
.

On behalf of the Board and Shareholders of Gatwick Airport Limited, Chairman Sir Roy McNulty has today written to the Prime Minister setting out a series of pledges which offer a road map to delivering a new runway for Britain.

The pledges to the Prime Minister that Gatwick has outlined today represent a fair deal for the UK and cover:

The full text of Gatwick’s letter to the Prime Minister can be accessed here.

Letter in the Times by Brendon Sewill, Chairman of GACC: 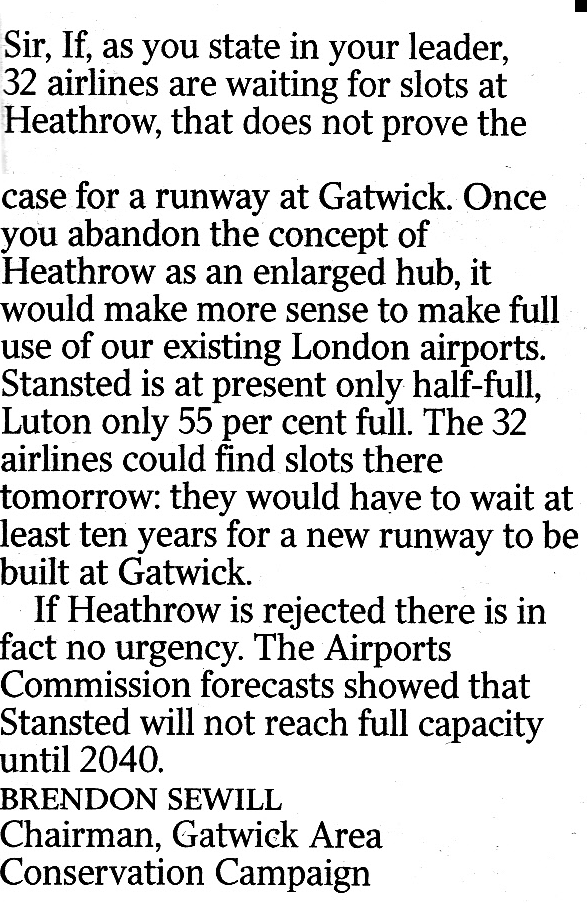 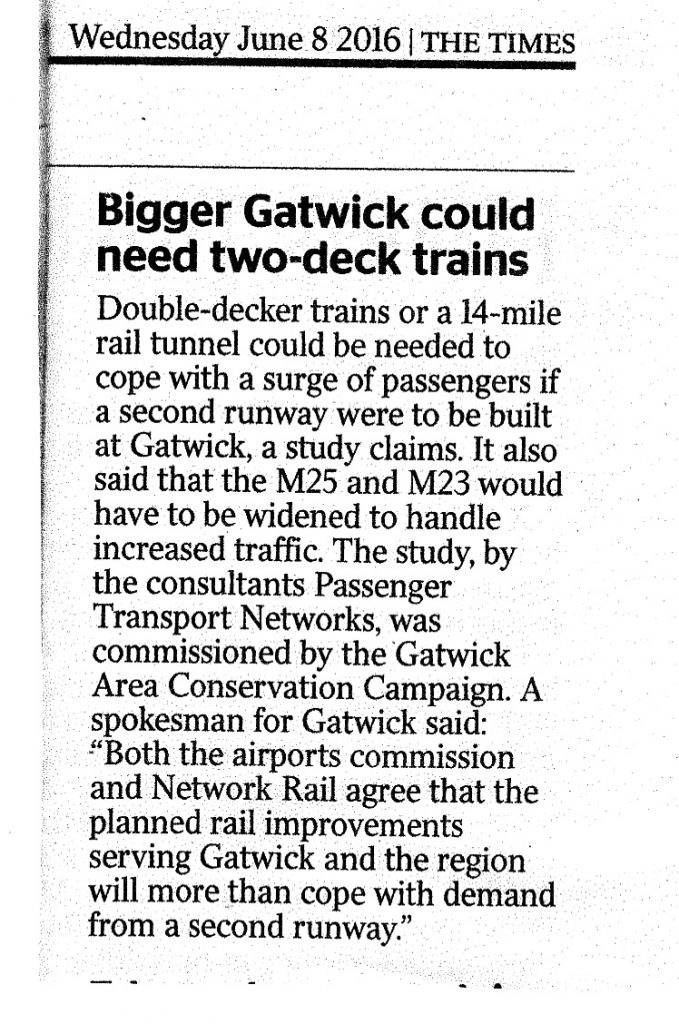