The Tunbridge Wells Anti Aircraft Noise Group (TWAANG) has researched the actual heights of aircraft around their area, approaching Gatwick. They are concerned that planes are not descending into Gatwick using the approved 3 degree Continuous Descent Approach (CDA), from 7,000 ft or even 6,000 ft.  Instead, planes as far out as 20 – 30 miles from the runway are descending by merely 1 or 2 degrees, and are much lower than they should be, using a proper 3 degree CDA. TWAANG have produced data showing the actual heights of planes arriving at Gatwick, against the heights they should theoretically be at.  For example, at 15 nautical miles from the runway, planes descending at 3 degrees should be at about 4,500 feet, and at 20 nm out, they should be at 6,000 feet.  At a 1 degree the heights would be 3,500 feet and 4,000 feet respectively. Pilots are encouraged by DfT and industry guidelines to keep their aircraft high and to use a 3° angle of descent in a low power low drag (LPLD) configuration. The lower heights mean there is greater disturbance than necessary for people being overflown, and the flatter angle of descent is likely to require engine power to sustain, creating unnecessary noise and poor economic performance. TWAANG say: “We observe plenty of aircraft making full CDAs from 7,000ft already, what is difficult to understand is why such a high proportion fail to follow their example.”
.
Tweet

Note: it is important to always use Gatwick’s “Casper” flight recording system (or Heathrow’s Webtrak, as these give nearly accurate aircraft altitudes.  FlightRadar24 is sometimes inaccurate, giving lower than actual heights.)

Full paper with all illustrations is at

The proposed Action Plan calls for the beginning of Continuous Descent Approaches(CDAs) to be raised to 7,000ft (from the present figure of around 6,000ft), but we are concerned that those on the ground will derive little benefit if the way approach descents are flown does not change.

Pilots are encouraged by DfT and industry guidelines to keep their aircraft high and to use a 3° angle of descent in a low power low drag (LPLD) configuration as this is both economic for the aircraft operator and minimises the noise on the ground.

Gatwick claim a high level of compliance with CDA standards for aircraft on intermediate approach to runway 26L (Westerly approach), but we are concerned at aspects which are unsatisfactory for those on the ground, which result in unnecessary and excessive noise disturbance.

Optimum CDA flying is in the interest of all communities involved with the Arrivals Review and the implementation of its recommendations, it applies equally to rural and urban populations. It is not a panacea, but it could be a useful step in the right direction.

We have created a graph depicting aircraft descending at 3°, illustrating the height against distance from touchdown that this achieves and including allowance for level flight to enable joining the ILS from below as required by the CAA:

If this profile is transferred to a map of tracks of aircraft on Westerly approach to Gatwick, arcs can be drawn showing where aircraft flying a 3° CDA should or could be at 6,000, 5,000 and 4,000 feet: 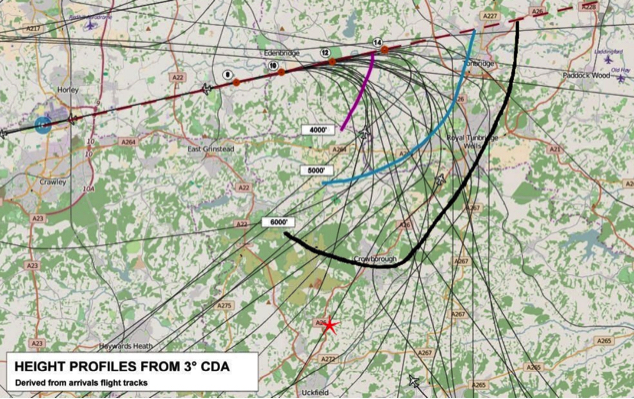 It is absolutely clear that these heights are not being achieved, aircraft on arrival are mostly flying very much lower. This has two important consequences:

• Greater disturbance than necessary is being caused on the ground because of proximity.

• A flatter angle of descent is likely to require engine power to sustain, creating unnecessary noise and poor economic performance.

These implications are supported by two further pieces of research. Analysis of flight data has shown not only that aircraft on Westerly approach are descending at substantially less than 3°, on average the figure is 1.7°, but in addition this compares very unfavourably with a worldwide sample of airports where the angle is typically much closer to the recommended 3°:

Clearly, aircraft that are lower than 6,000ft on the black curve running just outside the towns of Crowborough and Tunbridge Wells will descend at an angle of descent less than 3°. The following chart shows the resultant angle from heights of 5,000 and 4,000ft; respectively 2° and 1°. This is consistent with the heights that are constantly observed and recorded. 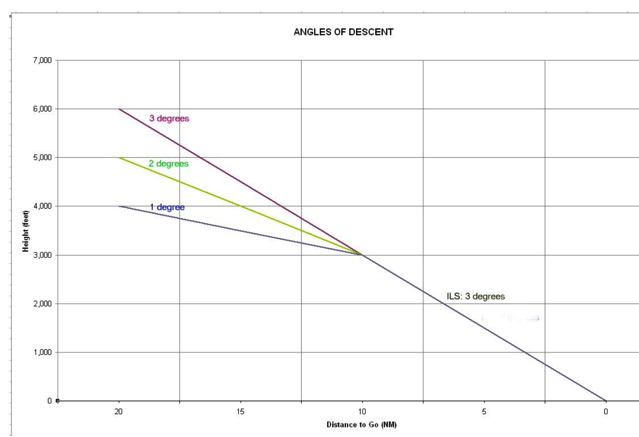 This raises another issue about Westerly approach flights, which is the range of heights(altitudes) that are seen. This was highlighted by a technical study of approaches:

From this we note that aircraft flying at 4,000ft at 20 nautical miles from touchdown are very likely to fly level for an extended distance, breaching the requirements of a CDA of any standard. We are very concerned that aircraft can fly over a conurbation such as Tunbridge Wells at unacceptably low levels. Towns such as East Grinstead and Horsham have formal height limits while this town and its surrounding suburban areas such as Langton Green, Rusthall and Southborough have no such protection. An example of such unacceptable flying is Vueling’s early morning flight on Thursday 26th May, when EC-KDT inbound from Paris overflew the centre of the town at 06:53 at 3,200ft above Gatwick, or 3,000 above ground. This flight failed to perform a valid CDA.

We observe plenty of aircraft making full CDAs from 7,000ft already, what is difficult to understand is why such a high proportion fail to follow their example. We have been told that pilots trained in the United States are taught to descend to a lower altitude as soon as they are given clearance. We think that they are also taught to prepare thoroughly for flying to any destination, and this must include understanding all correct procedures for their approach, which should include the advisory preferred descent protocols such as remaining high and quiet, and a 3E angle of descent.

Gatwick are trying to attract all the business they can get, and a consequence is that new pilots from unfamiliar airlines are coming to the airport, not understanding what is expected and insufficiently briefed.

‘Gate 4′ is a straight line running from East Grinstead (point 0 on the chart) to Paddock wood (15 nauticalmiles), running through Cowden (4nm), north of Fordcombe (7.5nm) and Langton Green (8.5nm), and through Speldhurst(9.5nm) and Southborough (10.5nm). This comes close to being a concentrated flight path peaking on the edge of and enveloping the conurbation of Tunbridge Wells, not to mention the more rural communities downstream.

The Noise Management Board which is currently being established has as its immediate aim to implement the 23 recommendations accepted (in principle) by Gatwick in its Action Plan, and among its members are representatives from the Aviation Industry, including Gatwick Airport itself (GAL), the Department for Transport (DfT), the Civil Aviation Authority (CAA), the NationalAir Traffic Service (NATS, air traffic control down to the ILS), Gatwick’s airport traffic control service (ANS), and an airline representative (from EasyJet).

We look to these professionals to work together to resolve the shortcomings and anomalies identified by the Arrivals Review and highlighted by these findings. As was anticipated, the Review identified that more could be done to reduce the adverse impact of Gatwick’s operations on its neighbour communities. This is their opportunity to cut through the complexities of the air transport world and deliver those improvements.

The full TWAANG paper with all the illustrations is at