Heathrow flights are capped at 480,000 flights per year – which was set as a condition of the Terminal 5 planning consent in 2001. Heathrow now wants to increase the number of flights by about 19,000, giving a total of about 499,000 per year – which means about an extra 50 planes per day, taking off or landing.  This would happen relatively soon, and about 4 years before a 3rd runway was operational – during its construction stage.  The cap of 480,000 can only be lifted if there is a planning application for a 3rd runway, and that could take several years to start – maybe not till 2020.  Heathrow is attempting to gloss over the inevitably increased noise by its chairman Lord Deighton saying the increase “would be accompanied by sweeping mitigation measures outlined by the airport in May, including a ban on night flights.” If that was true, it is likely to mean the loss of the half day of respite people east of the airport get, from runway alternation, when runways switch at 3pm each day.  This is hugely valued by tens or hundreds of thousands of people. Its reduction or removal would be fiercely opposed. Heathrow is trying to persuade government etc that more flights is vital to “show that Britain was “open for business” after the Brexit vote. A card they repeatedly play nowadays.
.
Tweet

More than 50 additional aircraft a day could take off and land at Heathrow even before a third runway is built under plans to accelerate the airport’s expansion.

Airport chiefs will seek permission to lift the cap on flight movements during the four-year construction period to boost connections to other parts of the UK and emerging economies.

Residents who are living on the Heathrow flight path say they are dismayed that the cap on the number of flights allowed to use the airport each year could be lifted.

Heathrow chairman Lord Deighton told The Times the airport might apply for it to be lifted for the four years before a third runway opened – if it was given the go-ahead.

At present up to 480,000 flights are allowed to use Heathrow each year.

The limit was set in 2001 as part of the agreement which allowed Terminal 5 to be built. However, the actual number of flights using the airport has hovered around 475,000 for the last few years.

Lord Deighton told the newspaper an additional 50 flights a day could use the airport and that the move was needed to show Britain was “open for business” after Brexit.

He said: “The whole point of it is to respond to how this economy needs to shape itself. It would be possible to introduce new regional flights which would connect up some places like Newquay and Liverpool.  It would be possible to also go to some of those emerging market destinations which everybody uses a bit earlier.”  – LORD DEIGHTON
But John Stewart, chair of the Heathrow Association for the Control of Aircraft Noise (HACAN), said, “Residents will be dismayed at losing the protection the cap has brought.

“If it is introduced in advance of a third runway, the third runway mitigation measures must also be brought forward.”

He explained that if the cap was lifted, HACAN would be pressing for key measures to be introduced, including a tougher night flight regime, the release of the £700 million promised to improve insulation of properties under the flight paths, and a guarantee that the runway alternation currently available to residents in west London will remain.

Where does the current cap of 480,000 annual flights come from?

19. The current 480,000 air transport movement cap was set as a condition of the Terminal 5 planning consent in 2001. A third runway would require an increase in the number of air transport movements allowed at Heathrow. To change or remove the cap would require a planning application [15] . The Labour government constrained capacity at Heathrow with a third runway until at least 2020 to 605,000 ATMs – and full capacity would have been 702,000 ATMs. 605,000 ATMs equates to 125,000 additional movements compared to the current cap of 480,000 ATMs at Heathrow; 702,000 ATMs equates to 222,000 additional movements.

See earlier – on fears of “mixed mode” operation of Heathrow runways, rather than the current “runway alternation”:

The Standard reports that the all-party 2M group of London Councils, including Wandsworth, Richmond, Hounslow and 17 more, have warned the Airports Commission that allowing both runways to be used for arrivals and departures at same time (= mixed mode)  would be ‘devastating’ to thousands of Londoners.  Alternating runways at 3pm each day gives residents a break from aircraft noise and removing this would destroy the quality of life of hundreds of thousands. The 2M group represents 20 councils and 5 million people under the flight paths. It is warning that allowing more plane traffic through ending runway alternation and having mixed mode instead would be as damaging as building a 3rd runway, and have a devastating impact.  On a typical day the first planes approach over South and West London from 4.30am. Intervals between aircraft are around 90 seconds.The 2M group want guarantees that alternating runways and limits on night flights will not be sacrificed so Heathrow can handle more flights.

[That was the public inquiry where the owners of Heathrow, BAA asked the inspector, Mr Vandermeer “to recommend to the government that there be no third runway at Heathrow and no increase in noise or night flights if the terminal is built.”] 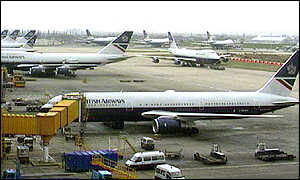 The record-breaking public inquiry into the building of a fifth terminal at London’s Heathrow Airport has ended after nearly four years.

The £80m inquiry has been the longest of its kind in Britain, but a decision is still not expected for more than two years.

By the end of the inquiry, held at The Renaissance Hotel in the airport complex, inspector Roy Vandermeerl had heard from more than 700 witnesses.

He spoke the last words of the hearing on Wednesday when he said: “Thank you very much, the inquiry is concluded.”

Mr Vandermeer, who has become a grandfather twice over since the inquiry started, will now take two years to make his report.

It will be based on more than 100,000 pages of daily transcripts, and on documents and letters which would form a pile more than 150ft high.

The Department of the Environment will receive the report in around March 2001, and is itself expected to take about nine months before announcing whether the £2bn Terminal 5 can be built.

Mr Vandemeer said: “The task ahead is going to be harder than running the inquiry, but it’s a challenge I am looking forward to.”

Mr Vandermeer and the government will have to consider the urgent need for airport expansion in south east England, as well as the environmental and congestion concerns of green groups and local authorities.

The airport operator BAA believes the case for the new terminal has been made overwhelmingly at the inquiry, which started in May 1995.

It says the new terminal would lead to only 8% more flights and 3% more road traffic at peak times.

The company has also pointed out that it has asked Mr Vandermeer to recommend to the government that there be no third runway at Heathrow and no increase in noise or night flights if the terminal is built.

BAA has spent about £195m on preparation for the terminal, including the costs of the inquiry and clearing the site.

If the terminal is given the go-ahead, it will take four-and-a-half years to build on the site of a sludge farm.

The earliest possible opening date for the terminal, which would increase Heathrow’s annual passenger numbers from 60m to 80m, is 2006.

BAA has said: “We face an airport capacity crisis and there is no alternative to T5.”

But those against the new terminal, including Friends of the Earth (FoE), say more flights and congestion will threaten the quality of life of those living near the airport.

They also point out that 96% of people who have written to the inquiry are against the project.

Local authorities opposed to it have called it “an aggressive proposal” which they say is not fair and does not make sense.

They say the terminal would mean an extra 160 flights a day in 10 years’ time.

FoE believes the government has already decided to agree to the terminal being built.

The group Heathrow Association for the Control of Aircraft Noise has urged the government not to overrule any inquiry recommendation to scrap the scheme.

The inquiry became record-breaking in November 1997, when it went over the 340 sitting days of the 1980s public inquiry into the Sizewell B nuclear power station in Suffolk.

Renaissance Hotel bosses, who hope that the final decision will be announced at their venue, are hosting a farewell party for the inquiry delegates.