While Heathrow airport continued shmoozing any Labour party MP it could, with its corporate hospitality at the Labour Conference in Brighton this week, anti-runway campaigners raised concerns about high air pollution levels from Heathrow.  A packed fringe meeting, standing room only, organised by the NO 3rd Runway Coalition, was addressed by John McDonnell, MP for Hayes and Harlington. John was extremely busy during the Conference but had found time to open the meeting on a subject close to his heart. Aside from his long-standing and determined opposition to a 3rd Heathrow runway, to protect his constituents, he was emphatic that the runway could and would never meet the 4 tests Labour have set. These tests refer to environment and economic aspects of the expansion. On air quality alone, the airport already generates high pollution levels, and these could only worsen with another 50% more flights.  Hammersmith MP Andy Slaughter also spoke convincingly on the low chance the runway would even actually be built, because of the catalogue of serious problems. Leonie Cooper, Chair of the GLA Environment Committee reiterated the seriousness of the air pollution problems around London, the harmful impacts on childrens’ lungs, and the determination of Mayor Sadiq Khan to get improvements.
.
Tweet

Heathrow continued its courting of Labour politicians and party supporters with corporate hospitality at the Labour Conference in Brighton this week while anti-runway campaigners raised concerns about high pollution levels.

According to Hammersmith MP Andy Slaughter, speaking at the No 3rd Runway Coalition fringe meeting on “Air Quality in Cities” on 26th September, a feature of this year’s Labour conference is a Heathrow Lounge. Andy told the packed roomed that the airport could not meet the four tests set by the Labour Party and even the economic argument, which Heathrow relied upon, didn’t wash after civil servants busted the figures. He pointed out that there is no financial advantage to expanding Heathrow over other airports. As a result, the MP observed that, “All they can do now is schmooze.” 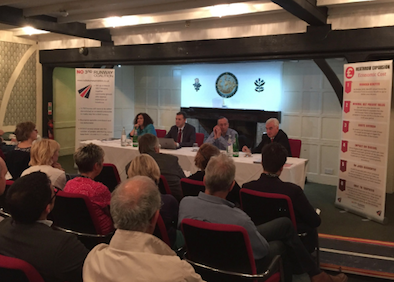 London Assembly Member Leonie Cooper praised Sadiq Khan for his efforts to improve air quality in the capital. Last year, the London Mayor had travelled around the city wearing a monitor to highlight just how much pollution everyone inhales during a day. Even travelling underground on the tube exposed passengers to high levels of pollution.

Leonie, who is Chair of the GLA Environment Committee, raised a particular concern about the damage inflicted on children’s lungs, which could not be reversed. She warned that the consequences of inhaling asbestos particles and coal dust were once unknown but we now realise they cause killer diseases. We do not yet know the long-term effects of inhaling the nano particles that are pumped into the air by road vehicles.

Leonie asked everyone to comment on the draft Mayor’s Transport Strategy 2017, which closes on 2nd October. This is easier than some consultations because respondents didn’t need to comment on every section.

John McDonnell, MP for Hayes and Harlington was extremely busy during the Conference but had found time to open the meeting on a subject close to his heart. John mentioned that he has been fighting Heathrow expansion since 1982. The airport is not closer to achieving its aim. 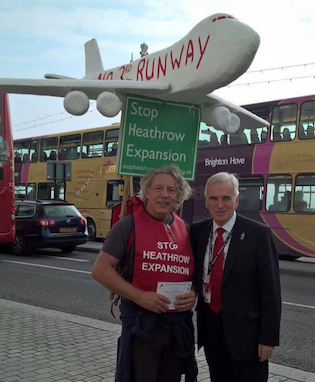 John McDonnell MP with Neil in the brilliant, Brighton sunshine outside the fringe meeting

The meeting was chaired by Tim Johnson, Director of the Aviation Environment Federation who remarked that it was the best attended fringe meeting that he had been to in years.

With so many other fringe meetings taking place, and a big meeting on the NHS being held at the same time, it showed the level of interest in air quality and airport expansion. 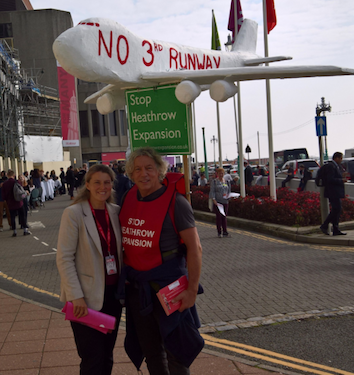 A number of campaigners travelled to Brighton to hand out leaflets promoting the event. One of those was Harmondsworth resident Neil Keveren, who wore a large aircraft on a harness. Being hard to miss, he was approached by many Labour supporters including Rachel Maskell MP who he had met in York during his walk up the country to the Scottish Parliament in the Spring.