At the start of the TUC conference in Brighton, there was a small gathering outside the meeting by opponents of a 3rd Heathrow runway, from local group SHE (Stop Heathrow Expansion). A coach full of runway opponents, many from the villages near Heathrow like Harmondsworth that would be obliterated by the runway – or made virtually impossible to live in – went down to Brighton, to ensure TUC delegates were reminded of the situation.  With the Trade Unions split on whether to oppose or support a Third Runway at Heathrow, the residents and campaigners were determined to put their side of the story and convince the Unions that opposition is the best course of action. The group was joined for a briefing on the latest developments by Hayes & Harlington MP John McDonnell, who posed with the team from SHE for photos. Many unions are keenly aware of climate change issues, and the need to reduce the UK’s emissions. They are aware that building new high carbon infrastructure is contrary to that. However, some unions (such as Unite) hope that expansion would bring jobs, at least to some parts of the country, and that hope overrides carbon responsibilities. Benefits from a 3rd runway to the rest of the country, in terms of jobs – other than near Heathrow – are tenuous and uncertain.
.
Tweet

Today saw the TUC bring their conference to Brighton where senior Trade Union officials and their members meet to discuss policy matters and campaigns ahead.

With the Trade Unions split on whether to oppose or support a Third Runway at Heathrow, my friends at Stop Heathrow Expansion (SHE) decided to run a coach full of campaigners from Harmondsworth to the seaside to put their side of the story and convince the Unions that opposition is the best course of action.

Leaving the Village at 9.30am, we arrived in a wet and windswept Brighton just before 11 and formed up outside the conference 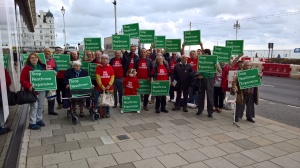 We were joined shortly for a briefing on the latest developments by Hayes & Harlington MP John McDonnell, who posed with the team from SHE for photos afterwards (Below) 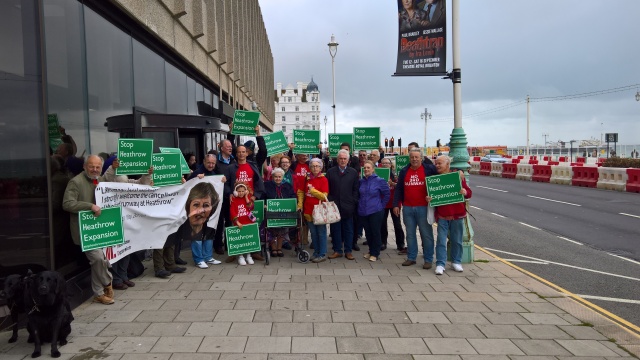 With the wind whipping up, the two of us holding the long banner were struggling to hang on to it – after John McDonnell commented on the weather, I joked that we were about to get some impromptu kite surfing in at this rate. His response was to quip, ‘ what’s that, the UKIP air force?’ – he obviously hasn’t heard the news! Whilst it was strange to be joking with a man who I have locked horns with politically for many years (Some of it quite unpleasant), it shows the strength of feeling against the runway that such diametrically opposed characters can come together and work alongside people of all backgrounds and political views on a subject that transcends politics and affects so many.

From there, we engaged with a number of trade unionists attending the conference and were met with a very good reception for the message.

I had a long chat with a gentleman who was handing out copies of Unity and was a member of UNITE – he was in agreement with us and was surprised that his Union leader, Len McCluskey, was in favour of Heathrow Expansion. Hopefully, the UNITE members we spoke with today who agreed with us will pass the message on and get him to change his mind!

After the initial mass pictures, the team split up with some remaining to speak further with delegates entering whilst others of us went for refreshments before rejoining the fray outside the conference building.

Amongst leaflets being handed out were some advertising a national shop stewards network event at the nearby Holiday Inn where UNITE General Secretary, the aforementioned Len McCluskey, was due to speak.

I suggested to SHE stalwart Neil Keveren that it might be an idea for me to pop down to the venue for ten minutes before our coach arrived for the return journey and try to get a word with him. He agreed and I trotted off with a placard and my No 3rd runway T-shirt to see if I could get an audience with arguably the most powerful Union leader in the UK.

Slipping in to the venue with a handful of assorted leaflets to make myself look like an invited guest, I evaded security easily and gatecrashed The Arundel Suite where the speakers were in full flow

Unfortunately, Mr McCluskey was nowhere to be seen but I arrived just as a Unite shop steward for the British Airways cabin crew took to the stage.

To be fair, the story he recounted of the pay and conditions of the cabin crew on differing contracts was compelling and not to the credit of ‘The World’s Favourite Airline’. With BA Chief Executive Willie Walsh complaining that a third runway would raise his operating costs, I wonder if he realises how his members pay could be affected should the project go ahead?

After an uncomfortable exit from the hotel where I was recognised as a former UKIP candidate, a brisk walk along the front brought me back to the rest of the group just as the coach was turning up for the return journey.

The general feeling was that we had received a favourable reception and hopefully this will filter through to those trade union bosses who think that a third runway is a good idea.

Why Heathrow Expansion does not deserve the support of trade unionists

Heathrow won’t pay the full cost of a third runway. For a start, it won’t pay the £17bn needed for transport infrastructure to support this massive expansion. This largely foreign owned company wants the UK taxpayer to front the bill and it is using the lure of jobs to get approval.Don’t expect to get what you are promised.

Outlandish predictions of 180,000 UK jobs are based on £147bn economic benefits, suggested by The Airports Commission.However, even the DfT have scaled back the maximum economic benefit to £6.1bn over 60 years! Not quite the golden jobs forecasts we were led to believe by Heathrow.

Despite the reduced benefit, the same jobs projection figure is being claimed. As well as this being completely fanciful, most of those people will never be held accountable when the jobs don’t happen.

Promises on jobs can’t be trusted

Heathrow will promise anything to get expansion. When it wanted Terminal 5 it made a range of promises on jobs – none were kept.

Yet Heathrow have failed at every opportunity to reveal the increase in jobs since T5 opened.

Offering jobs is a way to persuade people in poorer regions to support taxpayers money being invested in the South East yet again.

Taxpayers will be lumbered with a white elephant

Heathrow must spend around £17bn for its third runway and it has recently asked the CAA to allow it to raise charges for passengers to cover the risk of extra costs.

An overrun in Heathrow’s costs of just 1% would be enough to negate the overall benefits of the scheme.

We all want our children to make the most of their education and have a satisfying career.

The towns where residents live close to the northern runway and might expect to benefit from airport jobs has the highest percentage of workers in elementary jobs in the London Borough of Hillingdon and the lowest percentage of professionals according to the 2011 census.

‘Poverty Pay’ was the reason Unite gave for strike action by British Airways Mixed Fleet Cabin Crew. The union could find no evidence that crew achieved anything like the advertised ‘£21,000-£25,000’ for the job.

There is one plum job. Heathrow CEO John Holland-Kaye earned £2.06 million in 2015/16 and has a deal that will give him a big bonus if he secures a third runway

If you would like further information on the campaign against the third runway, please email info@stopheathrowexpansion.co.uk