Junior trade minister Greg Hands (MP for Chelsea & Fulham)has resigned from the Conservative government to oppose expansion of Heathrow. The vote in Parliament on whether to build the runway  will be on Monday. Greg said he had pledged to his electorate to oppose a 3rd runway, at the 2017 election, and he would keep his word and honour his pledges.  The borough would be badly over-flown if Heathrow was allowed to expand.  It had been thought that ministers with constituencies directly affected could have been allowed to miss the vote. However, the Government will be whipping the vote. The highest profile opponent of Heathrow expansion in the cabinet is Boris Johnson, the foreign secretary, who once pledged to lie down in front of bulldozers to stop it happening. However, in a cowardly and discreditable manner, he is shirking his responsibilities to stand up to his claims, by engineering an overseas appointment on Monday, to be out of the country. [Snout too firmly in trough, and enjoying his important high kudos job ….] Labour’s deputy leader Tom Watson suggested on Twitter that Mr Hands’ resignation should prompt the prime minister to allow her MPs a free vote. Greg has, in the past, held a range of other responsible ministerial roles.
.
Tweet 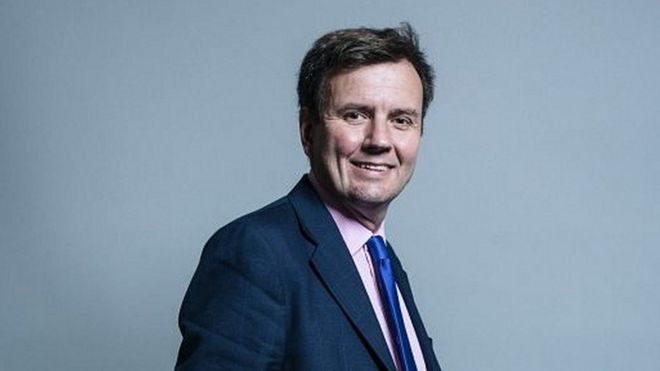 Junior trade minister Greg Hands has resigned from the government to oppose expansion of Heathrow Airport.

The vote on whether to build a third runway at the airport west of London is due to be held on Monday.

Mr Hands, who represents the Chelsea and Fulham constituency in London, said he had pledged to oppose the new runway at the 2017 election.

It had been thought that ministers with constituencies directly affected could have been allowed to miss the vote.

As the Government will be whipping the vote on Monday, this means I am resigning from the Government. It has been an honour to serve the Prime Minister (and her predecessor) for the last 7 years and I wish the PM & the Government every continuing success.

I wrote to the PM earlier this week on how I will honour these 2017 General Election pledges to the people of Chelsea & Fulham and vote against the Heathrow 3rd runway on Monday. 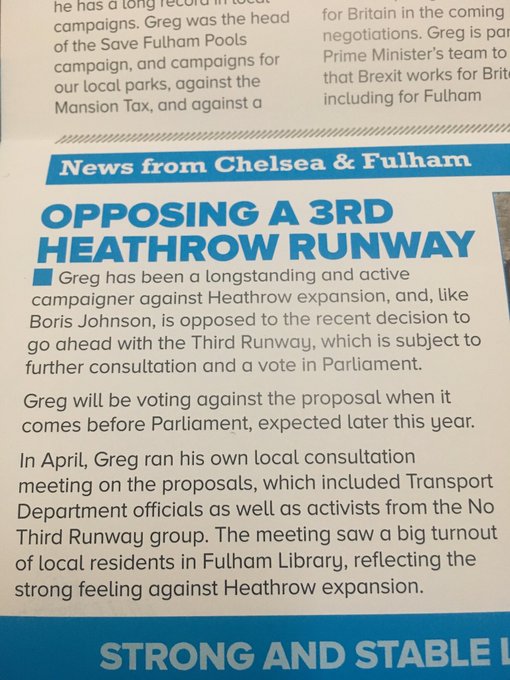 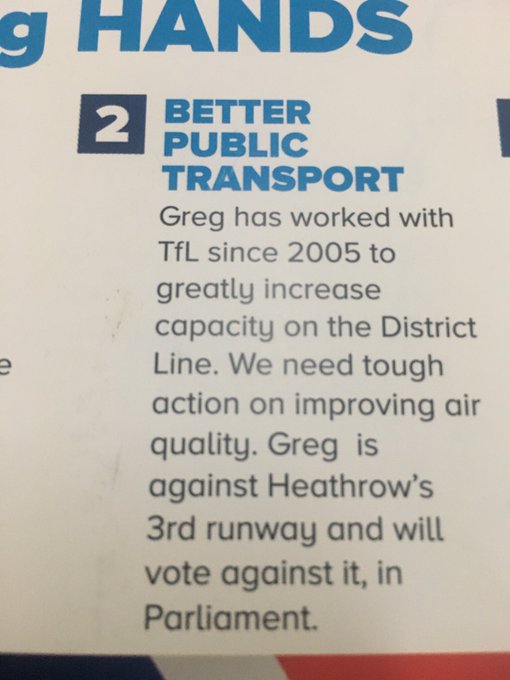 The highest profile opponent of Heathrow expansion in the cabinet is Boris Johnson, the foreign secretary, who once pledged to lie down in front of bulldozers to stop it happening.

But Mr Johnson is scheduled to be out of the UK on Monday so will not be attending the vote in the House of Commons.

Labour’s deputy leader Tom Watson suggested on Twitter that Mr Hands’ resignation should prompt the prime minister to allow her MPs a free vote: “It’s not too late for her to change whipping arrangements. This would also allow Boris Johnson to re-enter the country.”

If Boris Johnson has a backbone, or a shred of credibility left, he will join Greg Hands in resigning. #Heathrow

As the Government will be whipping the vote on Monday, this means I am resigning from the Government. It has been an honour to serve the Prime Minister (and her predecessor) for the last 7 years and I wish the PM & the Government every continuing success. https://twitter.com/greghands/status/1009741396243353601 …

Labour is also divided on the controversial issue, with members of the party’s leadership, such as shadow chancellor John McDonnell, opposed to it, but high profile trade union backers in favour. The party’s MPs are being allowed to vote however they want to on the issue.

The SNP are in favour of Heathrow expansion, with the Lib Dems opposed and with the government deciding to whip (order) Conservative MPs to vote in favour, it is widely expected that the expansion plan will get Commons backing.

A Downing Street spokesman said Mr Hands, who has held various ministerial roles and was chief secretary to the Treasury under David Cameron, had “served the government with great ability and distinction over several years, and we thank him for all of his work”.

He added: “This government is committed to expanding airport capacity at Heathrow – this is an important decision which will play a crucial role in securing the future of global Britain.”

The debate on expanding Heathrow has been going on for nearly 20 years.

The last Labour government backed the idea, and won a vote on it in 2009, but that plan was scrapped – and the idea of expansion put on hold for five years – by the Conservative-Lib Dem coalition formed after the 2010 election.

But the idea of expansion was resurrected and has been subsequently backed by the Conservatives.

Ministers approved a draft national airports policy statement in October but Parliament has to give its approval for detailed planning to begin.

Campaigners argue that a new runway will breach the UK’s legal limits on air pollution and increase noise pollution with an extra 700 planes a day.

It will result in huge disruption to residents of nearby villages, such as Longford, Harmondsworth and Sipson, with hundreds of homes likely to be knocked down.

Robert Barnstone, from the No 3rd Runway Coalition, told the BBC the government was “failing people and failing the environment as well”.

Former Transport Secretary Justine Greening, who backs expanding Gatwick instead, suggested the idea of Heathrow as a national hub airport was outdated and the focus should be on improving regional capacity.

And Tory MP Zac Goldsmith, who resigned his Richmond Park seat in 2016 over the issue and subsequently lost a by-election, said for many people “this doesn’t just look like a blank cheque being given by this government to a foreign-owned multinational, it looks like a whole book of cheques signed by our constituents”.

[Then there is then pro- Heathrow blurb …..]

“Greg Hands’ resignation is principled, and wholly enforced by the government’s decision not to allow a free vote, despite its earlier promises and u-turn from its previous position to oppose Heathrow expansion.”

The article in the Guardian says:
https://www.theguardian.com/uk-news/2018/jun/21/greg-hands-quits-as-minister-to-vote-against-heathrow-third-runway

A Downing Street source said: “He had been categoric to his constituents that he would vote against the third runway, so it is not a massive surprise that he has resigned. It is a three-line whip.”

Andy McDonald, the shadow transport secretary, said: “Greg Hands’s resignation piles the pressure on Boris Johnson, who promised his constituents he would ‘lie down in front of the bulldozers’ to stop a third runway. Instead he is jetting off to Luxembourg on Monday to avoid the vote because he is too weak to stand by his promises.”

A Downing Street spokesman said: “Greg Hands has served the government with great ability and distinction over several years and we thank him for all his work. This government is committed to expanding airport capacity at Heathrow – this is an important decision which will play a crucial role in securing the future of [a] global Britain.”

The government’s plan to expand the west London airport is almost certain to get the green light in the Commons next week. Conservative MPs have been told there is a three-line whip to vote in favour of the proposed £14bn expansion. Labour MPs will get a free vote.

Johnson, the foreign secretary and one of the expansion’s most vocal opponents, is due to be abroad on the day of the vote, allowing him to escape having to choose between resignation and rebelling against Theresa May.

The former transport secretary Justine Greening, a fierce opponent of Heathrow, told the Guardian she was “very sad” Hands had been forced to quit. “It’s totally wrong that Conservative MPs are not allowed a free vote to represent their local longstanding concerns on Heathrow pollution,” she said.

“Other Conservative MPs have also voiced concerns to me about Heathrow expansion more broadly. If the secretary of state for transport was confident of his case he should allow a free vote. Because that’s not the case, the government has lost a very capable minister.”

Chelsea and Fulham MP (Cons) Greg Hands has urged DfT ministers to impose a ban on all night flights at Heathrow. Greg renewed calls for all planes to be grounded between 11pm and 6am, a period of 7 hours, and says he is frequently woken up at night by noise from aircraft passing over west London.  In a letter to Lord Ahmed, the parliamentary under secretary of state for transport, Mr Hands argued that there should be a “comprehensive” ban on night flights at Heathrow. He said the lives of local people are being unfairly disrupted by the noise, and research from international health bodies, including the WHO and the BMJ, highlights the damaging impacts of sustained sleep deprivation on people’s wellbeing. “These Londoners have jobs to do and families to look after, for which they require a good night’s sleep.”  A ban of flights for a 7 hour night period would “lessen the detrimental impact on hundreds of thousands of Londoners living beneath the flight path”.  … “I find it unacceptable that the convenience, quality of sleep, and the health of millions of residents in London and the wider South East under the flight path is sacrificed for the sake of a few thousand inbound passengers per night”.