Local MP Ruth Cadbury has joined Chiswick campaigners against Heathrow expansion who say they are angry at the airport’s failure to hold a local consultation on changes which will significantly affect W4, particularly north Chiswick. The airport’s current round of consultation events (Airspace And Future Operations ) features events in Hammersmith, Ealing and Hounslow Civic Centre, but none in Chiswick.  This is despite the fact that the area faces significant potential disruption by proposed changes to flight paths or changes to respite periods even without a third runway. With a 3rd runway, the area will be intensely overflown by planes arriving to the new north runway, from the east. Campaigners say the level of low flights directly over the North Chiswick area area could reach 47 per hour (almost 1 per minute). It is likely that, with a 3rd runway, an estimated 35,000 residents could be affected. They consider that Heathrow is avoiding holding events in areas where opposition is likely to be strong and forceful, to try and ensure a more positive overall response to the consultation. The Bedford Park Society (BPS) and local group CHATR are planning a public meeting in Chiswick instead.
.
Tweet 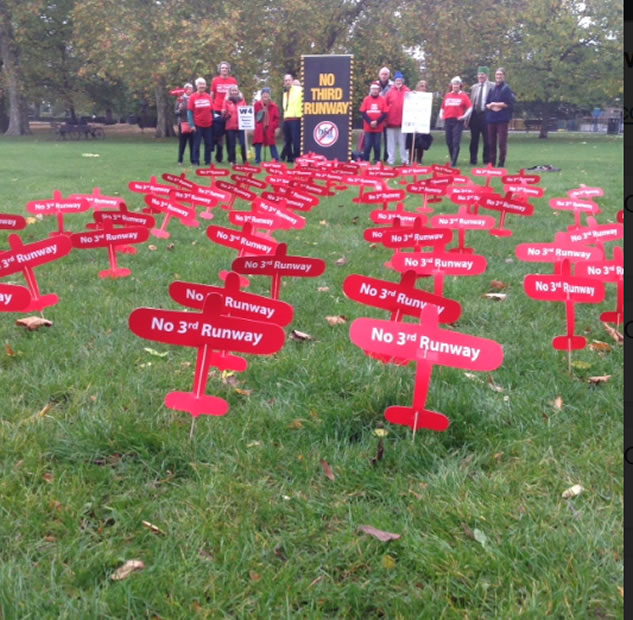 Local MP Ruth Cadbury has joined Chiswick campaigners against Heathrow expansion who say they are angry at the airport’s failure to hold a local consultation on changes which will significantly affect W4, particularly north Chiswick.

The airport’s current round of consultations (Airspace And Future Operations ) features events in Hammersmith, Ealing (Friday 1 February) , and Hounslow Civic Centre (Tuesday, 29 January) but none in Chiswick.

The list of Heathrow consultation events can be seen at  https://afo.heathrowconsultation.com/

The document containing maps that indicate roughly where noise may be in future is at  https://afo.heathrowconsultation.com/wp-content/uploads/sites/4/2019/01/3649-HRW-3R-A3-maps-booklet-AW-update-2-V1.pdf

This is despite the fact that the area faces significant potential disruption by proposed changes to flight paths or changes to respite periods even without a third runway. Campaigners say the level of low flights directly over the North Chiswick area area could reach 47 per hour (almost 1 per minute).

Even without a third runway, Heathrow are asking for another extra 25,000 extra flights, which campaigners say would breach respite periods for those under the existing approach paths. Campaigners against expansion say in Chiswick an estimated 35,000 residents could be affected and claim that Heathrow is avoiding holding events in areas where opposition is likely to be strong to try and ensure a more positive overall response to the consultation.

One Chiswick based opponent of the airport’s plans said, “They know that the areas where their expansion is going to bring about the biggest increase in noise are the same places that residents will make the most noise, therefore they are by-passing Chiswick during the consultation. It’s not the first time they have played this game.”

Heathrow Airport has defended its choice of consultation locations and said people also had the opportunity to respond online. The consultation covers a number of topics: Runway Alternation; Airspace changes; Westerly Preference; Night Flights; Extra flights in advance of a third runway. All the proposals assume a third runway will be built. The consultation runs from 8 January to 4 March.

Ruth Cadbury MP said she was disappointed with Heathrow Airport and she would work with local groups to see if a Chiswick event could be added.

A spokesperson for the Bedford Park Society (BPS) – which covers the area of North Chiswick likely to face considerable noise disruption from early morning flights, said that the BPS and CHATR (Chiswick against the Third Runway) were planning a public meeting in Chiswick.

The statement said, “The Bedford Park Society has alerted all its members to the latest Heathrow public consultation and warned them of the major disturbance to all Chiswick residents that the proposed additional flights will cause even if the Third Runway does not go ahead.

“We are currently working through the complicated, detailed information in the consultation and drafting a response from the Society. In the next week we also plan to provide some suggested points for residents to make in their response since it’s vitally important as many residents as possible submit their views.

“We were concerned to see that the nearest consultation events were in Hammersmith and Ealing but none was planned for Chiswick, which will be so significantly affected by the proposals. It is now clear that the number of low flights directly over Chiswick will be 47 per hour – almost 1 per minute – if the Third Runway is built.

“We attended the Hammersmith consultation event on 24 January and together with CHATR emphasised the strength of feeling against the proposals amongst Chiswick residents and strongly recommended that a consultation event should be arranged as soon as possible. Ruth Cadbury, MP, stressed that Heathrow owed it to the community to provide and distribute leaflets for each affected area detailing the impact of the proposed flight paths for each so that people could understand clearly the effect of the proposals.

“We hope that a consultation event may now be arranged. The Coalition Against a Third Runway and CHATR are also intending to organise a public meeting in Chiswick.”

Hacan has outlined a summary of how the changes might affect you and you can also put your postcode into the airport’s consultation document to get information on what is planned for your area.

A Heathrow spokesperson said, “We’ve spread our Consultation events over the designated consultation zone and have selected venues based on their good transport links, accessibility, availability along with a host of other factors. Our website has all the consultation documents and materials, allowing the public to submit their feedback online or via post as well.”

Ruth Cadbury said, “We already live in the noisiest environment in the UK, and both proposals are in breach of international noise standards. It’s therefore vital that you take part in the consultation, and encourage everyone you know to as well.’’

The MP is also organising public meetings with local campaign groups, such as CHATR, BASHR3, NoR3 Coalition and HACAN, in order to speak to local residents about Heathrow’s expansion.

If you want more information about the consultation, visit this summary page from HACAN.

Third Runway Would Mean An Extra 700 Planes A Day

Wandsworth Council Leader, Ravi Govindia, has urged residents concerned about the impact of a 3rd runway at Heathrow, to attend a Heathrow consultation event that the airport is hosting in the borough this week. They need to make their voice heard. He has criticised Heathrow for having just one such event in Wandsworth, at a location that will be difficult for many residents to access. That is even though the increased aircraft noise would affect hundreds of thousands of Wandsworth residents. The event is being held on 30 January and is open to residents from 2pm to 8pm at the University of Roehampton, SW15 5PH.  Councillor Govindia said residents know that a 3rd runway would have a serious impact on the borough. It would produce an unacceptable rise in noise and air pollution, damaging the environment and posing a risk to people’s health and well-being. The Council believes that the impact from additional flights would be felt most keenly in West Hill, Southfields, Earlsfield and Tooting. Currently most aircraft noise from is concentrated over the north of the borough including Putney, Wandsworth and Battersea. Many people will get intense plane noise for the first time.

A report, by the London Assembly environment committee, calls for Heathrow expansion to be stopped, due to the effects of aircraft noise. The report has renewed calls for the 3rd runway to be stopped. The noise from aircraft negatively affects work, relaxation and sleep, with “severe effects” on health and wellbeing. Caroline Russell, chairman of the committee, said: “The experiences of residents living with the daily nightmare of overhead noise are deeply worrying. This drive towards filling airspace capacity must be checked. For too many people, including children, aircraft noise is a major dominant intrusion into their everyday lives.”  If Heathrow builds the new runway, the number of flights will increase from around 475,000 to 740,000 a year.  It is likely that around 200,000 more people will be badly affected by aircraft noise. Heathrow also plans to increase its flights by 25,000, to around 500,000 per year and change flight paths, including overflying new areas, even before any 3rd runway. Ms Russell added: “…aviation authorities and operators must prioritise the health and well-being of Londoners and give us a break.”