Plans to expand Bristol Airport accused of being flawed; decision put off till early 2020

A decision on Bristol Airport’s major expansion bid will not be made this year. They submitted proposals to boost passenger numbers from 10 million to 12 million a year by the mid-2020s, and to expand the airport’s on-site infrastructure.  A decision had been due over the summer but people are continuing to comment – there are currently about 3,780 objections and 1,800 letters of support.  Reasons for opposing the expansion include climate change, traffic levels, air pollution and noise.  When they declared a “climate emergency”, Bath and North East Somerset Council members also voted to oppose the airport’s expansion, amid concerns about increased congestion on rural roads in their area. There is also doubt about alleged economic benefit.  The airport and its supporters always talk up the possibility of more jobs, and improved “access international export markets.” In reality, the majority of air passengers are on leisure journeys.  The application will be considered by North Somerset Council’s planning and regulatory committee meeting in 2020, with possible dates the 22 January, 19 February and 18 March. 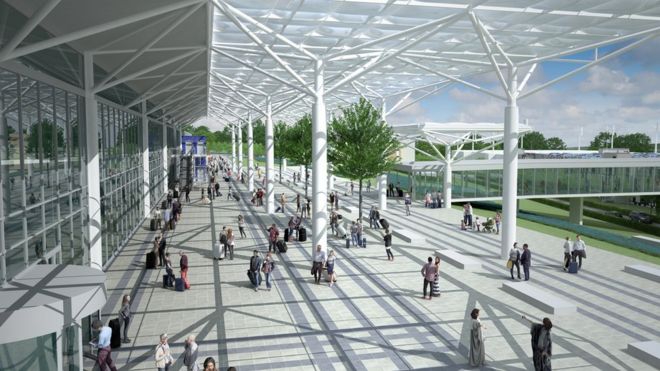 A decision on Bristol Airport’s major expansion bid will not be made this year.

The firm submitted proposals to boost passenger numbers to 12 million a year by the mid-2020s, and to expand its on-site infrastructure.

A decision had been due over the summer but people are continuing to comment – there are currently 3,787 objections and 1,807 letters of support.

Concerns have spanned from climate change to traffic and noise.

When they declared a “climate emergency”, Bath and North East Somerset Council members also voted to oppose the airport’s expansion, amid concerns about increased congestion on rural roads in their area.

It also said there was a lack of evidence about the economic benefit, the Local Democracy Reporting Service said.

The airport responded by saying there was unlikely to be a significant impact on the B3130, which runs from Pensford to Clevedon, and there would be a wide range of transport improvements.

It said it was “not made aware of any residual concerns” after meeting with council leaders.

There have been numerous supporters, including neighbouring authorities.

South Gloucestershire Council said the expansion would bring significant economic benefits to the region, but added it needed to be supported by a “step change” in public transport improvements.

The comments were echoed by Bristol City Council, which said: “Expansion of Bristol Airport will provide a significant boost to the local economy, including creating many new jobs accessible from south Bristol and access international export markets.”

The application will be considered by North Somerset Council’s planning and regulatory committee meeting in the new year.

An exact date has not been set but scheduled are meetings on 22 January, 19 February and 18 March.

Plans to increase the size of Bristol Airport are ‘seriously flawed’, according to parish councillors who live close to it.

During the meeting, in Barrow Gurney, concerns of air traffic noise were raised along with observations of excessive traffic through the village.

There is a planning application, yet to be decided by North Somerset Council, to increase the passenger throughput of the airport from 10 million passengers a year to 12 million, which the parish council fears would lead to further noise intrusion.

The application includes a new canopy at the front of the building, an additional multi-storey car park and changes to the on-site road layout.

Cllr Nick Tyrell said: “In Barrow Gurney, as in many other villages in the vicinity of the airport, there is widespread concern about the inevitable impact of airport expansion on their quality of life.

“We want to ensure that we do not have to suffer an unacceptable volume of traffic coming through the village and we do not want to experience more noise pollution.

“In our view, the current planning application is seriously flawed.

“It relies upon a significant further increase in the volume of car parking at the airport – which involves development in the greenbelt.

“This will place huge pressures on the network of rural roads in the surrounding area which already struggle to cope with the volume of through traffic generated.

“There are also major environmental issues associated with expansion, most notably the inevitable rise in CO2 levels generated by more aircraft and cars.

“This conflicts with North Somerset Council’s declaration of a climate emergency and its adoption of a low carbon reduction target to reduce emissions by 50 per cent by 2035.

“It is time to recognise that the communities around the airport need to be protected from the numerous environmental effects of airport expansion.”

The planning application, submitted in December 2018, has received more than 3,700 objections and 1,800 letters of support.