Extinction Rebellion (XR) East Herts is campaigning against Stansted Airport expansion with a protest march in Bishop’s Stortford.  MAG, the owner of Stansted airport, wants the Planning Inspectorate to decide at a planning inquiry on its planning application to be allowed to handle up to 43 million passengers a year, up from the current 35m cap, after Uttlesford District Council did a U-turn on their previous consent decision, and refused permission.  The airport claims there will be no more flights, even with 8 million more passengers per year …  Uttlesford Planning committee members concluded MAG had failed to demonstrate that the inevitable extra flights would not result in an increased detrimental effect from noise, pollution and other environmental impacts. Councillors also regarded infrastructure proposals as inadequate. XR East Herts is calling on MAG to withdraw its appeal on the grounds that expansion would generate 74,000 more flights each year. There would be a considerable increase in the carbon emissions. XR Herts is not affiliated in any way with local group, Stop Stansted Expansion, that also wants MAG not to proceed on its attempts to expand.
.
Tweet

Activists will assemble at the railway station at 11am for a demonstration against a planning appeal by Manchester Airports Group’s (MAG).

The owner of the Uttlesford hub has asked for an independent inspector to rule on its planning application to be allowed to handle up to 43 million passengers a year, up from the current 35m cap, after Uttlesford District Council did a U-turn and refused permission. 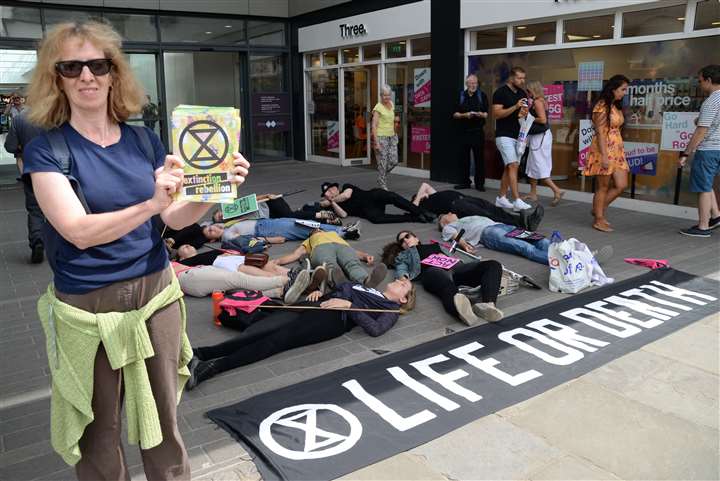 Stansted maintains its proposals can be delivered without any increase in the 274,000 flights a year that are currently allowed, and include a legally binding commitment to reduce the airport’s noise ‘footprint’ and implement an enhanced sound insulation scheme for householders.

The application was rejected by UDC’s Residents for Uttlesford (R4U) administration on January 24 this year, despite having been conditionally approved by its Conservative predecessor in November 2018.

Planning committee members concluded MAG had failed to demonstrate that the extra flights would not result in an increased detrimental effect from noise, pollution and other environmental impacts. Councillors also regarded infrastructure proposals as inadequate.

Before both meetings, UDC officers and independent legal advisors advised there were no grounds to refuse the application.

XR East Herts is calling on MAG to withdraw its appeal on the grounds that expansion would generate 74,000 more flights each year. In 2018, the airport had 27m passengers and 198,124 flights.

The protesters, who are not affiliated with the Stop Stansted Expansion group, said: “This is a mass action calling upon MAG to withdraw its appeal. We are also calling upon the Government to stop airport expansion in line with the Paris Agreement and to ‘Build Back Better’ with green jobs.”

The demonstration is set to last at least an hour. Participants are being asked to join the “fun, family-friendly march with lots of flags and placards” which will be accompanied by XR Chelmsford’s samba band.

Social distancing will be observed and protesters are asked to wear masks, use hand sanitiser and not to share food or drink. They are also asked not to apply perfume or aftershave owing to allergies.

A spokesman for Stop Stansted Expansion, which has been fighting airport growth since 2002, said: “SSE wishes to make it clear that it has no affiliation whatsoever with Extinction Rebellion.”

In an email sent on 28th July, Stop Stansted Expansion (SSE) congratulated Steve Griffiths on his appointment as Managing Director of Stansted Airport, but urged him to listen to the local community and to reconsider the Airport’s proposed appeal against the unanimous rejection of its planning application by Uttlesford District Council.

In the email SSE’s Chairman, Peter Sanders, said an appeal would be costly and time-consuming for all parties at a time when they are hard pressed by other important issues.

The Manchester Airports Group (MAG) has decided to appeal against the refusal by Uttlesford District Council of the expansion plans of Stansted airport. Stop Stansted Expansion (SSE) Chairman, Peter Sanders, said this was “callous, cynical and pointless” and prolongs uncertainty. MAG has been seeking an increase in the permitted number of flights using Stansted, up from the present limit of 35 mppa to 43mppa.  Stansted’s actual throughput in 2019 was 28 mppa and will be very significantly lower in 2020 due to the impact of Covid-19.  Uttlesford District Council (UDC) first received MAG’s expansion proposals for Stansted in June 2017 and spent more than two and a half years considering the issues prior to 24 January 2020 when its (cross-party) Planning Committee voted by 10 votes to zero to refuse the application. MAG itself had said it wanted the application to be determined locally rather than nationally, and that UDC was the “competent and appropriate authority” to deal with its application. But now it is appealing, for the decision to go to a Public Inquiry, that would be costly for UDC at a time when finances are struggling.