New arrival routes for Luton Airport could see noisy flights over other parts of Beds, Bucks and Cambs

A consultation by Luton airport and NATS was launched on 19th October, to change the arrival routes for the airport, which could see aircraft flying closer to some towns in Beds, Bucks and Cambs. Luton Airport currently shares arrival routes and 2 holds with Stansted, a situation which has been described as “unsustainable” due to both airports’ size (pre-Covid). A delay at one airport can impact the other.  It is now proposed that a new aircraft hold for Luton is formed above the St Neots and Huntingdon area, along with separate routes “further out and higher up”. This is to ensure its operations don’t clash with Stansted. There are two options.  Local campaign LADACAN says: “As far as people on the ground are concerned, this consultation and its hundreds of pages of technical documentation boils down to a simple question: are concentrated tracks or randomly dispersed flights the best solution when aircraft are passing closely spaced communities at low altitudes?” Luton’s aim, of course, is to fit in more flights so airport traffic can grow …  The consultation runs until February 5th 2021.  There are maps at https://consultations.airspacechange.co.uk/london-luton-airport/ad6_luton_arrivals/ which show the location of two new proposed PBN arrival routes, and more detail from LADACAN at https://ladacan.org/consultation-on-arrivals-flight-paths/
.
Tweet

New arrival routes for Luton Airport could see flights over other parts of Beds, Bucks and Cambs

A consultation has been launched today (Monday) to change the arrival routes for Luton Airport – which could see aircraft flying closer to other towns in Beds, Bucks and Cambs.

Luton Airport currently shares arrival routes and two holds with Stansted, a situation which has been described as “unsustainable” due to both airports’ size.

A delay at one airport can impact the other, with similar delays, noise and carbon emissions.

Today’s consultation proposes a new aircraft hold for Luton Airport above the St Neots and Huntingdon area, along with separate routes “further out and higher up”. This is to ensure its operations don’t clash with Stansted.

> Option one focuses upon higher altitude arrival routes from the new hold, with the latest air navigation technology (Performance Based Navigation – PBN) at altitudes of around 8,000ft and above to separate Luton’s arrivals from Stansted’s.

> Option two, described as the “preferred” choice, offers the same but with added “pre-determined” routes spread out to wider areas outside Luton.

Area affected by the proposed changes include parts of Bedfordshire, Buckinghamshire, Cambridgeshire, Essex, Hertfordshire and Suffolk. An online postcode tool (available in the virtual exhibition here) allows anyone in these areas to see what the changes may mean for them. 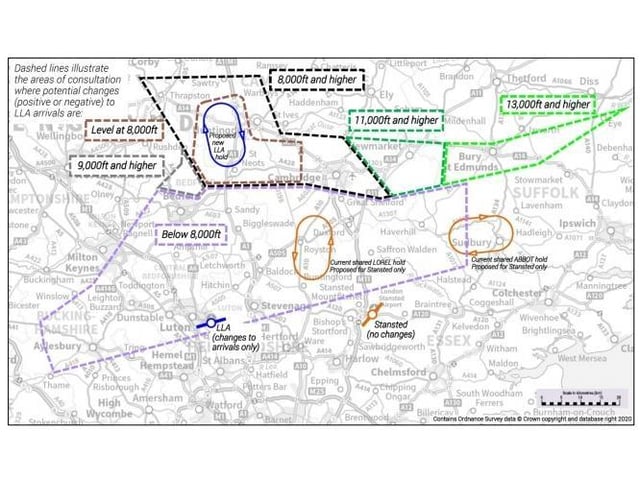 Dotted lines show where the changes may take place.

The area surrounded by the purple dotted line is where  planes will be below 8,000 feet (ie. definitely audible)

Lee Boulton, from NATS, said: “The number of flights into Luton Airport has increased significantly in recent years and our controllers have had to delay aircraft and manually manage each flight to ensure safety.

“This proposal is all about ensuring safety and the consultation is a great opportunity for people to give us their feedback and help shape the proposed options, so that the airspace around the airport operates more effectively into the future.”

To comply with COVID-19 health and safety restrictions, representatives from the airport and NATS will host a number of webinars and virtual meetings throughout the consultation period to present the details of the proposal to local communities, airspace users, businesses and MPs.

These will replace traditional “town hall” meetings and drop-in events and provide a platform for participants to put questions to subject matter experts. A virtual exhibition will offer everyone access to all the information they need to make an informed decision and provide feedback that will help determine the final proposal.

Neil Thompson, operations director at Luton Airport, added: “Any airspace change can have impacts for a wide variety of people. Local communities may be affected by noise, airlines will see a change to the routes that they fly and local airspace users may see changes too.

“That’s why over the last 18 months we’ve been working hard with NATS, local community representatives, airlines and others to help develop the final proposals.”

The consultation runs until February 5.

Lots of detail from the local community group,

Luton Airport is consulting on proposed changes to arrivals flight paths which could have a significant noise impact on residents over a wide area from Leighton Buzzard in the west to Walkern in the east. Their preferred option includes concentrated tracks rather than random dispersal of aircraft, which can mean people near or under the concentrated routes suddenly become aware of a lot more aircraft.

As far as people on the ground are concerned, this consultation and its hundreds of pages of technical documentation boils down to a simple question: are concentrated tracks or randomly dispersed flights the best solution when aircraft are passing closely spaced communities at low altitudes?

Random dispersal (Option 1) means potentially more people will hear aircraft, but not all the aircraft will be as close or sound as loud. On the arrivals flight path while the aircraft are being brought towards the “lining up” point where they make a final turn towards the runway, this is how it works at present. From that point onwards, the noise experience will be the same as now – a concentrated stream of aircraft.

Concentrated tracks (Option 2) mean fewer people may hear aircraft as they navigate towards “lining up” point, but those people are likely to perceive all of them rather than just the ones which used to come close. So effectively all the noise is dumped on the unlucky folk near the proposed concentrated route, and those further away will hear fewer aircraft.

The “refinement” to this is to have a couple of concentrated routes to choose from, and switch between them on different days. At the end of the day, the amount of noise is the same, it’s just a matter of how widely it’s spread. There’s nothing particularly “fair” about the process – all that can be said is that the aviation industry likes to use the new technology of GPS navigation to save air traffic controllers having to do so much work, and to make the routes more predictable.

Where communities are widely spaced it’s a useful technology – where they are close, it’s impossible to avoid everyone. Which goes to show that Luton Airport is in the wrong place for massive further expansion – but that’s another story…

The consultation runs until 5th February, which is just as well because the documentation is not the easiest to get to grips with. There are various maps buried in the documents and a complicated “layered PDF” which illustrate the proposals. Mastering it all takes time and effort, so we have used the Airport’s data to create images giving a fair and balanced presentation of the alternatives below.

Have a look at these maps, find where you live, and consider what the noise effects might be. Have in mind the following questions:

* Am I currently affected by planes arriving into Luton Airport?
– If so, is it going to get better or worse according to these maps and options?
– If not, will I start to be affected according to these maps and options?
* Do I agree in principle that aircraft tracks should be dispersed over a wide area to share the noise, or concentrated so that fewer people get more of the noise?

In all the maps, the solid-outlined light blue, mauve and orange areas will be increasingly noisy as the aircraft descend. The black lines show the centre of the proposed concentrated flight path in Option 2.

See maps and details at  https://ladacan.org/consultation-on-arrivals-flight-paths/