Protesters, organised through the Gatwick Area Conservation Campaign (GACC), gathered near the airport, chanting ‘Gatwick is big enough’, to express their opposition to the airport’s plans to convert its standby runway into a runway for routine flights. Campaigners, residents and councillors held a peaceful demonstration next to a noise monitor in Charlwood, to coincide with the midnight launch of Gatwick’s public consultation into its proposed expansion. Operating as a 2-runway airport would see Gatwick increase its annual passenger capacity from 62 million to 75m by 2038  – making it almost as large as Heathrow today. GACC chairman, Peter Barclay said the expansion of the airport would have negative impacts for people over a wide area – in terms of noise and air pollution, more night noise and sleep deprivation, and impacts on local infrastructure.  All that affects people’s quality of life. While humanity urgently needs to reduce greenhouse gas emissions, if we are to avoid the most catastrophic impacts of climate change, it makes no sense d to allow Gatwick to expand, adding another 1 million tonnes of CO2 emissions per year. 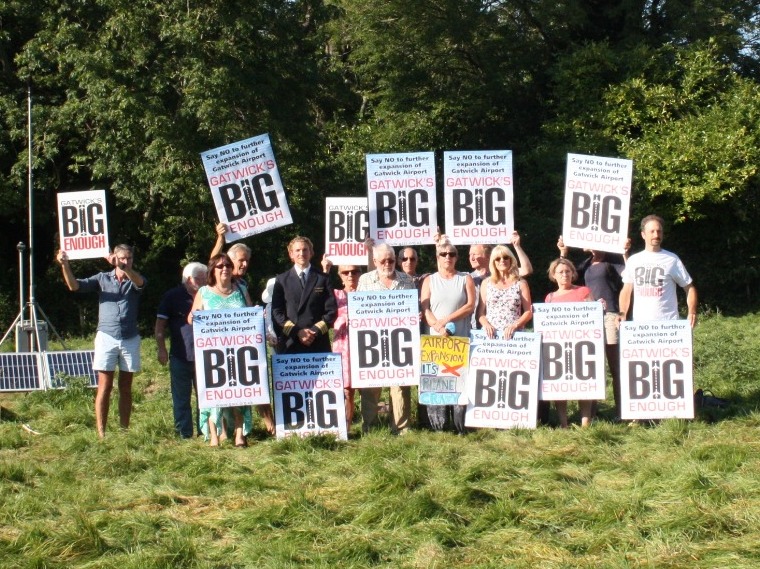 Campaigners, residents and councillors held a peaceful demonstration at 4.15pm on Wednesday (September 8), next to a noise monitor in Charlwood, to coincide with the midnight launch of Gatwick’s public consultation into its proposed expansion.

The West Sussex airport, the second busiest in the UK, is pressing ahead with plans to bring its emergency runway into regular use despite a collapse in demand caused by the pandemic.

Operating as a two-runway airport would see Gatwick increase its annual passenger capacity from 62m to 75m by 2038.

Around 1m passengers travelled through Gatwick in the first seven months of this year.

Gatwick Area Conservation Campaign (GACC), founded in 1968, is behind the protest staged on Wednesday.

GACC chairman, Peter Barclay from Charlwood, explained: “Our concerns are about the impact that [the second runway] will have on local residents around the area, not just on the northern side but completely around the airport.

“The growth forecast there will take Gatwick to an airport almost the size of Heathrow.

“One can only imagine the impact that has in terms of noise and air pollution, climate change most importantly and impacts on local infrastructure.”

Chants of ‘Gatwick’s big enough’ were heard at the demonstration in Glebe Field on Wednesday afternoon as protesters held placards and posters saying the same.

Mr Barclay added: “I often get the argument if you don’t like it, move away. But people have been here far longer than the airport has, we’ve got generations of people living in the community of Charlwood that go back to Domesday.

“This is the village people love, why should we be moving because a global corporate organisation wants to increase its profits?”

Charles Lloyd from Penshurst in Kent said more flights would mean “more noise and sleep deprivation” for people living beneath flight paths. He added: “Noise has a huge effect on our health and quality of life.”

Jonathan Essex, a Green Party councillor for Surrey County Council, also attended the demonstration and has raised concerns over the environment.

He said: “The overwhelming scientific consensus is that we urgently need to bring down greenhouse gas emissions if we are to avoid the most catastrophic impacts of climate change.

“With these impacts so clear, it makes no sense to allow Gatwick airport to expand, adding another 1 million tonnes of CO2 emissions per annum.”

A 12-week public consultation on the airport proposals begins on Thursday (September 9).

Second runway at Gatwick would be ‘disaster for the climate’, Green Party warns

The Green Party has warned a second runway at Gatwick would be a disaster for the climate and could result in an extra 1.5 million tonnes of carbon emitted each year.

Councillors and members from the South East Green Party met with former Gatwick-based pilot Todd Smith as they launched their campaign against the plans on the eve of the consultation – which went live today (Thursday, September 9).

Airport chiefs believe they have mitigated environmental concerns in the plans to bring the Northern Runway into routine use. They say that new technologies will create quieter engines and this will offset the increased amount of flights created by the plans.

The Green Party has calculated expansion could result in an extra 1.5 million tonnes of carbon each year

But Caroline Lucas, Green Party MP for Brighton Pavilion, said: ““Converting Gatwick’s emergency runway to support even more flights is completely incompatible with the UK’s climate targets. The Government should be looking to ways of driving down aviation demand, not facilitating it.

You can see all full consultation materials for Gatwick’s plans and details how to give your views here.

“More flights at Gatwick will cause more noise, pollution and road congestion and undermine what few efforts there are to put us on the path to net zero emissions.”

Surrey Green Party Councillor Jonathan Essex has calculated that the planned expansion at Gatwick will increase emissions by more than 1.5 million tonnes of carbon a year.Councillor Essex said: “Converting Gatwick’s emergency runway to support even more flights would be a disaster for the climate. The fact that these plans have even been put forward implies that the government just reflects business interests rather than providing leadership on the climate.

“We need a Green New Deal plan to decarbonise every home and journey locally, not a further increase in the noise, pollution, congestion and pressures of Gatwick, whose climate impact already dwarfs that of its surrounding area.”

Todd Smith, 32, former Gatwick-based pilot and co-founder of environmental group Safe Landing, said: “Airport expansion at Gatwick or any other UK airport is in direct conflict with the need for climate leadership and contradicts the advice from the government’s independent Climate Change Committee.

“It’s about time we had a grown up conversation regarding aviation’s role in this emergency and how we can support highly skilled workers’ transition towards the essential low carbon jobs of the future.”

The expansion that Gatwick might perhaps eventually be allowed, by using its emergency runway as a full runway, would require proper scrutiny through the planning Development Control process (DCO). The airport might be able to handle up to an extra 50,000 annual flights by doing that.  However, more expansion and more extra annual flights could be added, by making more use of the single main runway.  That might add another 60,000 annual flights (about 16 million annual passengers).  But because there would be no physical building work required (no extra runway length or extra terminal) there would be no planning permission needed, and no chance for public scrutiny of the impacts of the gradual expansion. Now Tom Tugendhat (MP for Tonbridge & Malling) has written to Robert Courts, the Aviation Minister, to ask for a meeting to discuss this anomaly. He says the main runway growth would be “more than the aggregate growth at the 5 UK airports that are currently seeking expansion.  In each of those cases the proposed growth has been robustly scrutinised and communities have been able to have their say. The government cannot simply ignore the greater impacts at Gatwick because it has different planning position.”

Both Gatwick groups have joined 14 other UK community groups from eight airports in calling for all airport expansion to be halted, because of the Government’s move to include international aviation in carbon budgets, from 2033, and legislation. The campaigners’ letter to the Secretary of State for Transport (Grant Shapps) and the Secretary of State for Housing, Communities and Local Government (Robert Jenrick) to ‘suspend the determination of all applications to increase the physical capacity of UK airports, or their approved operating caps, until noise and climate policies were in place, against which such applications could be judged.’  There is due to be a consultation on UK aviation carbon emissions in the next month or so. It is irresponsible act for Government to allow any airport expansion plans before this, prejudging the outcome of its net zero aviation and low carbon transport consultation.  Peter Barclay, chairman of GACC, added: “Airport expansion is completely inconsistent with the Government’s new approach to aviation emissions and the formal advice from the Committee on Climate Change.”   See full article at